The key to The Trade comes up short. Again.

Share All sharing options for: Another Wade Davis disaster start

This was over early. I'm thinking early like before the All-Star break when the Royals set their rotation for the start of the second half.

Wade Davis is not worthy of a spot in this rotation.

Consider this: If your General Manager thinks his team is a contender and doesn't "sell" at the upcoming deadline, how can he justify allowing Davis a spot in the rotation?

Or is it up to Ned Yost to make the move and push Davis to the bullpen?

Somebody needs to stand up and do the right thing. Especially if you're going to pose as contenders. Even if it's just in your own mind.

Anywho, back to Davis. More of the same on Monday. Eighty-three pitches and eight outs. Unreal.

From Brooks Baseball, here is how Davis has evolved with his pitches through the years. Remember, he spent 2012 in the bullpen. 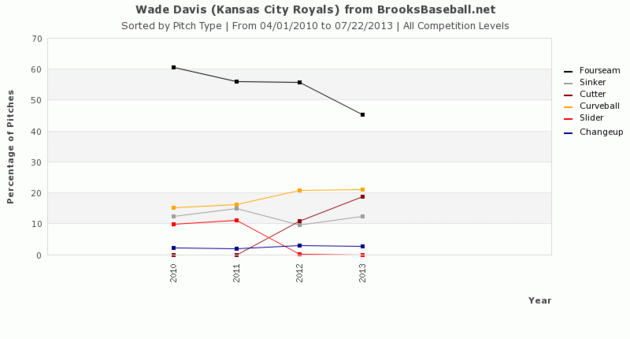 Fewer four-seam fastballs in exchange for more cut fastballs. The slider disappeared when he went to the bullpen and it's never come back.

Now the results from this year with his various pitches:

There isn't a pitch in the arsenal that works. His change-up has always been substandard, which is why there has always been the rumblings that he belongs in the bullpen. He doesn't throw it much, but there's a good reason. His sinker gets a ground ball nearly 60 percent of the time, but those grounders have eyes. A .431 BABIP? Good grief. The curve and cutter aren't effective either. His line drive rates are 42 percent against the change, 30 percent on the curve and 28 percent on the cut fastball.

Davis can miss bats, but more often than not, opponents are barreling anything Davis offers.

I'm not telling you anything you haven't seen or don't already know.

On Monday, it was a walk to start the game. Mike Moustakas didn't help by failing to come up with a potential double play grounder at third that resulted in the first run. (Help me. I only saw the Orioles broadcast of the Moose play and they never slowed it down. Makable? Jim Palmer said he "started to throw to second before he had the ball in his glove.") A sac fly added another run.

Then Davis loaded the bases to start the second. Somehow, he came up with a pair of strikeouts and a lineout and spectacular grab by Lorenzo Cain to escape with no damage. Davis owns a 8.3 SO/9, which is his best rate as a starter by far. Honestly, with the results from the tables above, I have no idea how he does that.

Davis allowed the leadoff hitter on for the third consecutive inning. Mercifully, Yost pulled him. It was a mercy killing. He was toast before he ever threw a pitch tonight.

The rest of the game was just details.

The Royals are now 2-2 post break. If they go 12-3, they will have hit Dayton Moore's challenge of putting up a 15-5 stretch. Fingers crossed.