Where Have You Gone Alex Gordon?

The Royals' left-fielder was an All-Star, but has not hit like one for more than a month.

Share All sharing options for: Where Have You Gone Alex Gordon?

In addition, Gordon's isolated power (ISO) of .127 is the lowest of any year in his career, including the injury plagued and simply dreadful 2009 and 2010 seasons.
That is not to say that Gordon is 'the' problem with the Royals. His ability to get on-base, even in what is shaping up as a bit of a down offensive year for him, excellent baserunning and outstanding fielding still leaves Gordon as one of the three best overall players on this team. Nor do I think it is time to panic with regard to Gordon. As with Billy Butler, there seems to be plenty of past performance evidence to suggest that an offensive rebound is due to come, maybe sooner rather than later.
Still, are Gordon's current offensive woes the result of the up and down nature of this game we call baseball? Is it bad luck more than anything else? Gordon, after all, does have a BABIP of just .243 during this stretch of .188 hitting.
However, Alex Gordon is swinging less often than he did in 2011 and 2012, particularly as of late: 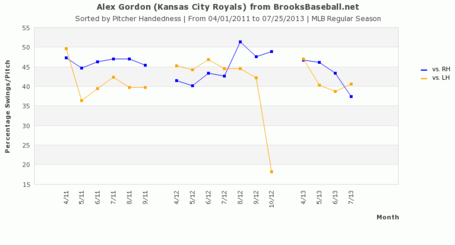 .
Of course, swinging less has a lot to do with where the pitches are being thrown. It would make sense that after two very good offensive years in 2011 and 2012 and with a somewhat weak lineup following him that Gordon might well be seeing fewer good pitches. Keep in mind, much of the year has seen the until last night punchless Alcides Escobar batting behind Alex.
Following is the 2011 strike zone plot of where pitches have been thrown to Gordon (from the catcher's point of view): 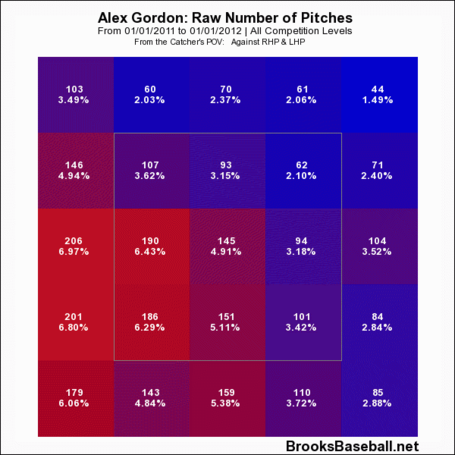 And the same chart for the 2013 season 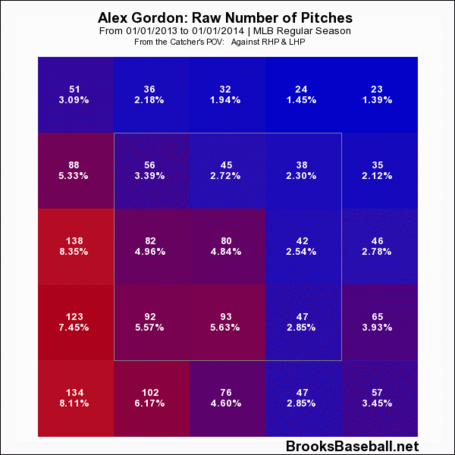 :
Pitchers seem to be migrating a greater percentage of their pitches from the outside portion of the strike zone to down and outside of the zone. That would seem logical given that Gordon spent the bulk of 2011 and 2012 making pitchers pay for pitches in the zone. Nothing too earth-shattering there.
Now, there is a bit of blip when we compare the percentage of pitches Alex has swung out in the same zones. First, the 2011 numbers: 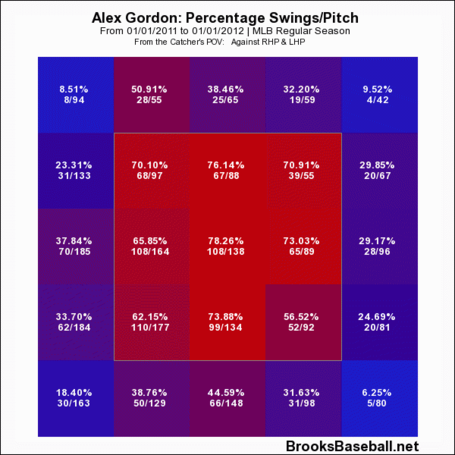 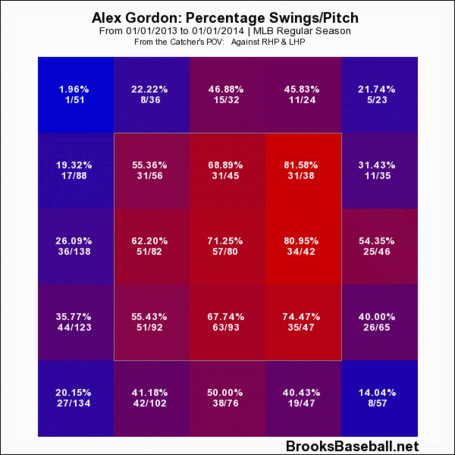 Alex is swinging more on pitches away from him that are outside of the zone, but not as often on pitches that are on the outer third of the strike zone. He putting swings on balls down low, out of the zone. Impatience? Trying to make too much happen when the pitches are not there?
I think we could all understand a good hitter on this team succumbing to both impatience and feeling the need to do more. Will Eric Hosmer batting second and swinging a good bat (assuming that Ned leaves Hosmer there AND the magnificent one continues to hit as he has recently) ease the pressure on Gordon and also force pitchers to throw him more strikes?
The nice thing about Alex Gordon is that his 'down' 2013 is still decent and he doesn't do all the little things, he does all the things and thus provides a ton of value on the diamond outside of what he does at the plate. The Royals, however, could certainly use a revitalized Gordon bat at the top of their order and given that it was there just six weeks ago, I think the probability is high that it will all come back to Alex in short order. Forcing pitchers to bring those outside and low pitches back into the edges of the strike zone and triggering on them when they do, might be the key to Alex Gordon returning to form.