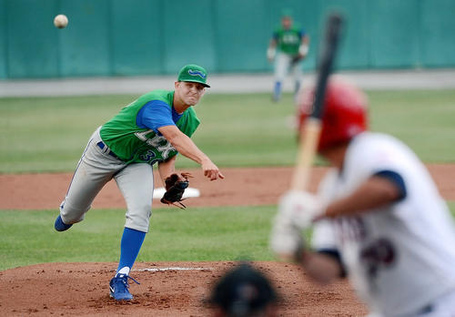 Christian Binford had a fantastic outing today in A-Ball Lexington. Pitching 6 innings while allowing 0 runs on 5 hits. He walked just one batter while striking out 12.

There's no weird home-road split that's pushing those number either as he has a 2.25 ERA and 34:6 K:B in away games. He's been good against not only righties (as a right handed pitcher generally is) but against lefites he has a 2.55 ERA with 41:9 K:B in 42 innings while allowing 50 hits. He's only given up 5 earned runs in the 7 games spanning the post All-Star break.

The biggest flaw so far this season for Binford has been his inability to clamp down with runners in scoring position. He's allowed 20 runs on 26 hits in 30.1 innings which is good for a 5.93 ERA.

Binford is a 30th round pick out of Mercersburg Academy in Mercerburg, PA. The tall 6-7 righty is much more of a finesse pitcher than a power pitcher surprisingly for a guy of his size. He lead his prep school to the Mid-Atlantic league titles with a 0.64 ERA while striking out 78 in 55 innings. Binford doesn't turn 21 until December.

Binford's repertoire consists of a low 90's fastball, curveball, and changeup. The fastball is easily his best pitch as he shows good command with it. The secondaries lag behind a bit with only his changeup showing some sort of plus potential.

So far he's done a very good job of coming back from Tommy John Surgery in 2009.

Last year in Burlington he had a 2.03 ERA in 40 innings with 31 K's to 4 walks. Today he set a career high in strikeouts with 12. He's never allowed more than 4 walks in a game, and he has pitched FIVE games where he has gone at least 7 innings and didn't walk a single batter.

Binford's command is absolutely impressive. While he doesn't have excellent stuff, he spots his fastball with complete command. He doesn't profile as a front line guy, but more of a back of the rotation starter or possibly a good bullpen piece.

Nothing is set in stone for Binford and he still has a very long way to go before appearing for the Royals, but he's certainly the best 30th round pick for the Royals in the past 20 years.

Only 2 players have ever been drafted in the 30th by the Royals and made the majors. One is Brian Bevil who hung in the minors for years before pitching in 60 games, 59 of them as a reliever, and posting a career 6.28 ERA and 4.81 B/9. He amassed a 0.4 fWAR.

The other one is a guy you may have heard of: Todd Zeile. At one point the #7 overall prospect, he would go on to play in over 2000 games as a thirdbaseman, swatting 253 home runs with a career triple slash of .265/.346/.423 and 22.4 fWAR. He also has the most home runs by a player with a last name starting with the letter Z. That would have been a pretty good draft pick by the Royals...if he would have signed with us. Instead he went UCLA, re-entered the draft 3 years later, and was taken by Saint Louis with the 27th pick in the 2nd round.

It looks like Binford is on pace to be the best Royals 30th rounder, but he does have a ways to go. There's an outside chance he seems Wilmington this year, but very unlikely as they have only 34 games remaining in their season.

Binford will look to keep dominating the Sally League for the rest of the year and should make another 7 or so starts. Lexington is currently in 1st place in the Sally South, and #1 overall, so a playoff spot could give him another start or three depending on how well Lexington does.

Next year Binford should see Wilmington at the age of 21 which will put him just under the league average age. Binford probably won't be a fast riser given his skill set, but a trip to Northwest Arkansas certainly isn't out of the picture if he has good results in A+.

I'm not sure if Binford is a Top 10 Royals prospect, but he certainly belongs in the conversation for Top 20.