Previewing the sandwich game of the Royals and Twins.

The way Detroit and Cleveland are playing, it seems as though Kansas City has to win all the games just to keep pace. During their seven game win streak, the Royals have held the opposition to three runs or less in every game while scoring four or more runs in five of them. It seems startling simple, doesn't it?

The post-trade deadline world begins tonight with Jeremy Guthrie taking on Kevin Correia in a battle of two pitchers who believe true gentlemen do not strike batters out.

Per nine innings, Correia has allowed 10.6 hits, 2.1 walks and struck out less than 5 batters. He is almost exactly the same pitcher the 32 year old right hander was in Pittsburgh last year and the season the before that. The Twins' hurler will throw four and two seam fastballs around 90 mph and provide a heavy dose of a cutter (36% of the time this season) that is just a tick slower and, at times, has been classified as a slider. The obligatory curve and change-up are also in Correia's arsenal.

Here's a chart, because charts are fun and I get paid by the amount of space used, not by the word: 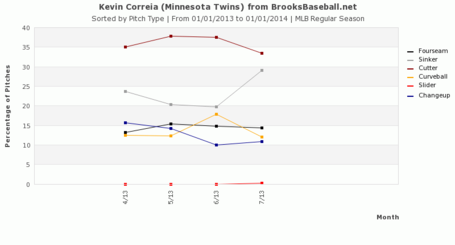 Guthrie allows a walk per nine innings more than his counterpart, but surrenders one less hit over the same period, while striking out just 4.7 batters. He throws a solid three miles per hour faster than Correia and uses a traditional slider (according to Brooks Baseball) instead of the cutter. Jeremy is pretty much who he is and has been throughout the bulk of his career, although his walk rate is the highest since becoming a regular. If the Royals want to make some noise down the stretch, having Guthrie come closer to duplicating his excellent second half of 2012 as opposed to his current duplication of his career would help greatly.

Quite obviously, Jeremy Guthrie does not induce many swings and misses. Here's a chart (cha-ching!): 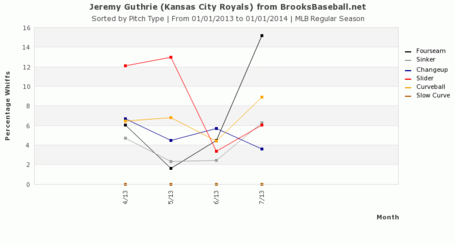 Dayton Moore's acquisition of Justin Maxwell and nothing else made the trade deadline more curious than exciting. Maxwell is intriguing, but he will also turn thirty this winter. Roster move is coming later tonight or tomorrow morning prior to a 12:10 Thursday start.