Billy Butler Can Hit...He's Just Not Currently Doing So

The Royals' DH is not, will not be and should not be expected to be a big time home run hitter, but he is slugging almost seventy points below his career mark.

Share All sharing options for: Billy Butler Can Hit...He's Just Not Currently Doing So

Even before this year, Butler was often criticized for not hitting a ton of home runs. It was ridiculous criticism in my opinion as Butler's decent, but not prodigious home run totals, augmented by piles of doubles led to slugging percentages of .492, .469, .461 and .510 the past four seasons. Those numbers are more than fine when coupled with Butler's ability to get on base.

Getting on base, by the way, is something Butler has continued to do in 2013. Despite a lower than normal batting average, Billy still is reaching base at a .378 clip. That number, however, is the one of the few (walk rate is another, obviously) that Billy is currently sporting that is NOT among his career lows. Be it a number that they put on the scoreboard or one that only those of us in basements pay attention to, Butler's numbers are across the board lower than any of the past five seasons.

It's still early, however, and we have seen Billy Butler get hot and stay hot. Six weeks from now, Billy might have 18 home runs, 33 doubles and all will be well. Frankly, I might put money on that or something similar happening.

Butler, after all, is walking more, striking out about the same and hitting line drives at an above average rate. He is hitting the ball on the ground more, which coupled with a returning to career normal HR/FB, has certainly curtailed Butler's home run totals.

To be honest, in reviewing the fantastic player cards over at Brook's Baseball or the data at Fangraphs there is not much difference between how Billy is being pitched or where he is hitting the ball. Butler has been pitched around more, 43% of the pitches to Butler have been strikes as opposed to 46% the prior two years, but maybe not the extent it seemed. His contact rate is the same and Billy is not flailing at pitches out of the zone with any greater regularity than in the past.

All the peripherals would indicate that Butler is due to bounce back to, well, Billy Butler.

I did, however, find a couple of interesting charts over at Brooks. Some of you might find more...and better, but these caught my eye.

This is Butler's whiff percentage by zones for 2013. 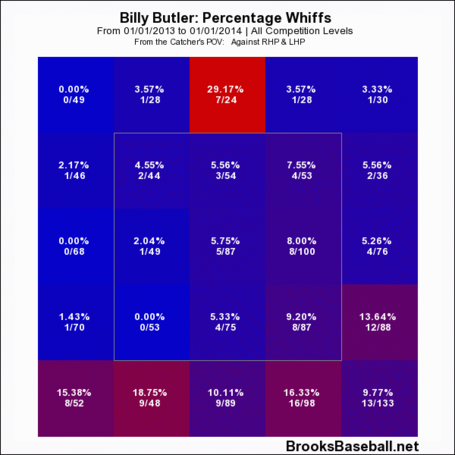 And the same chart for Billy from last season; 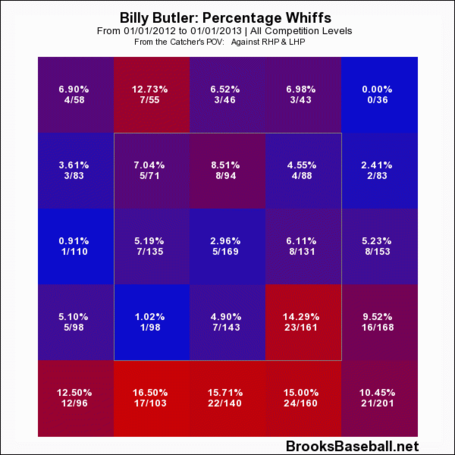 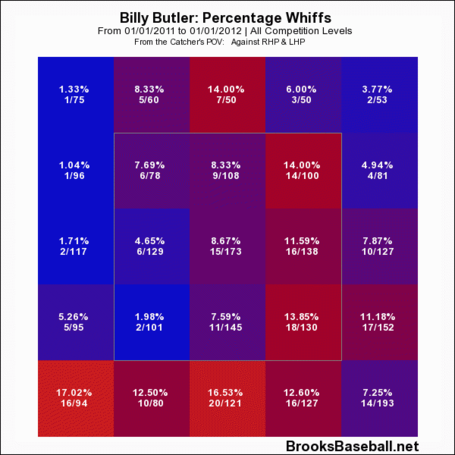 Does the fact that Butler is swinging and missing at a high pitch up in the zone more have anything to do with a 2013 that has seen Billy have good, but not Butler-esque level production? Or is the top chart just a half-season of noise, soon to be erased by bushels of singles and doubles off of Billy's bat?