That's Nine in a Row!

We are all just living in Lorenzo Cain's world.

Share All sharing options for: That's Nine in a Row!

Another day, another Royals' win and, of course, a Cleveland win as well. Kansas City did make up half a game on the idle Detroit Tigers with their ninth straight win.

James Shields got the win, allowing just two runs over six innings, but it was a struggle. Shields walked five only struck out four and threw just 67 of his 116 pitches for strikes. A fair majority of James' four seam fastballs were sitting around 91 mph, a couple miles per hour slower than usual. Maybe it was the nuances of the gun at Target Field or the nuances of Shields himself that caused the lower than usual velocities. Over the years, Shields' four seamer velocity has varied quite a lot. 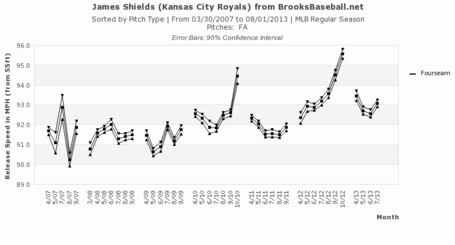 You have to ignore the two October spikes as they were the result of just one start. Should Ned Yost have let James Shields stay in the game after a two out sixth inning walk? No, but it did not end up harming anything and a 7-2 game is as good a time as any to let your pitcher feel good about himself, I suppose.

While Shields was gritting his way through six, Lorenzo Cain changed the entire face of the game in the fifth. With the Royals up 5-2 and a runner on base, Trevor Plouffe sent a rocket to deep left center. Cain sprinted to the wall, lept and stole a home run from Plouffe. Truly just at tremendous play by Lorenzo - something we have gotten used to seeing out of him this year.

From that point forward, the Twins did not get another hit, the Royals added two more runs in the top of the sixth and that was that. Game over. Nine in a row.

In addition to sparkling defense, Cain singled, scored twice and walked three times as the Royals battered a bad Minnesota team with eleven hits and four walks, while striking out just three times. Everyone but Eric Hosmer had a hit and all nine Royal batters either scored a run or drove a run in.

Seven times during this nine game winning streak the Royals have scored four or more runs to push their record when scoring four or more to 39-9. The pitching staff has held the opposition to three runs or less in all nine wins. Baseball seems so simple when everything is going right.

Off to New York we go to play three with the Mets.