Recently, I finished the fiction baseball centered book, The Might Have Been by Joseph Schuster. It revolves around the the main character, Edward Everett Yates, as he progress through his baseball career. The title of the book gives the book's focus, unmet dreams. It focuses on Yates' baseball career with several interesting sub-characters coming and going. I don't want to expose too much of the plot, so I won't.

As a baseball fan, I found the book a fast, easy read with decent story and meaning. I would recommend it to any looking for the nice mix of fiction and baseball.

In the fourth inning of Monday's win versus the Marlins, Donocan Solano hit a double to RF on what looked to be a routine fly ball. Instead it fell between Maxwell (RF) and Dyson (CF). Maxwell was guarding the right field line and was no where near the ball in play. Here is a screen shot when Maxwell finally is in view on the screen. Initially, he out of view. 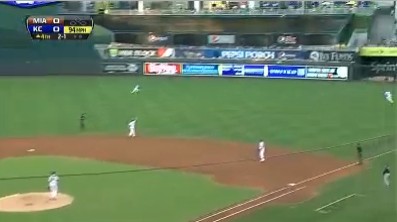 The right-handed Solano likes to go the other way to right-field, but not to the extent Maxwell was playing him. Here is how often Solano hits the ball to the outfield.

Field: % of balls hit to slice of the field (source)

Most likely, a Solano batted ball will end up in the middle of the field, rarely down the lines. About 1/3 of the time, he will hit the ball right where he did in right center. I have no idea why Maxwell guarding the line. Just some horrible positioning of the outfielders.

Mendoza Has Been Playing Baseball Since Last Year

Hopefully Luis Mendoza will rest this upcoming off-season. Last season, he began his off-season right after Christmas on December 28th. He continued throwing through the Caribbean Series championship. Additionally, he started for Mexico during the World Baseball Classic.

It was just too many games. After starting 15 games for the Royals, he was moved to the bullpen in mid July. Since then, he has made only two appearances. In those two games, he has allowed seven runs in only five innings of work. Truthfully, I am a little surprised he is not on the DL with some mystery illness like a fatigued arm.

Domenic Lanza at ItsAboutTheMoney.net created the All-Homegrown Teams. These rosters are created from players signed or drafted by their original teams and composed of only current roster players. Here is the Royals roster.

Lanza's thoughts on the team:

This Royals team shows the mixed dividends that the "greatest farm system ever" has paid. On the one hand, this is very much the team that folks were expecting a couple of years ago - with Greinke and Beltran in tow. On the other hand, several of these players have not panned out as planned, and the rotation is held together with duct tape. The offense would definitely be exciting, and a one through nine of Gordon, Beltran, Hosmer, Myers (if he's in the outfield), Butler, Moustakas, Perez, Aviles, and Ellis would be tough to top.

Besides Greinke, the starting pitching would be horrible. Actually no, probably worse than horrible. It would be like early 2000's Royals horrible.