Ervin Santana has been outstanding, but do you gamble on a big deal?

As of right now, the 2014 starting rotation would likely consist of James Shields, Jeremy Guthrie, Wade Davis, Danny Duffy and either Felipe Paulino, Yordano Ventura or maybe even Will Smith.   That obviously assumes that Kansas City will not re-sign free agents to be Ervin Santana and Bruce Chen and funnel their resources into bolstering the offense.

Until recently, the thought of trying to sign Santana to multi-year deal (which is what he will be offered by someone this winter) never once crossed my mind.  Even as one who was not particularly outraged by the trade that brought Ervin to Kansas City and as one who did think there was a chance he would be considerably better than his awful 2012, the idea of him being a Royal for more than just this one season never seemed likely to me.   For that matter, the idea did not generally seem to be desirable, either.

Santana, after all, is somewhat legendary for his inconsistent year to year performances.  Whatever metric or traditional measurement you want to use (ERA, FIP, WAR, even Wins, Mr. Bowden), Ervin has some remarkably variations from season to season.  That is not exactly the kind of guy that screams 'long-term deal'.  There is no point in Santana's career where, if you had him on a three year contract, one of those years would have an ugly ERA and FIP over five.  That is the risk you run in pursuing a multi-year deal for Ervin Santana.

While Ervin is enjoying the second best season of his career (again, by pretty much any statistical measurement), it seems unlikely that he will be this good next year.  I do think there is a pretty good chance Santana could be the pitcher he was in 2010 and 2011.   It is, however, worth noting that Santana's two previous 'best seasons' by ERA, FIP and WAR were immediately followed by two of his worst.

It is not hard to see Santana's main issue.  His three worst seasons are those coincide with the three worst walk, home run and strand rates of his career.  Obvious and certainly hardly unique.  That Santana can be truly awful one year and very good the next is somewhat unique, however.

Is anything really different in 2013?

On the surface, maybe not.   Santana's home run rate per nine innings is back down to a more usual 1.02 and the home runs per fly ball percentage is a normal (for Ervin) 11.9%.  After holding a very high Left On Base percentage early in the year, that number is edging ever closer to those posted in both 2010 and 2011.  While Santana's 3.13 ERA is outperforming his FIP of 3.76, that spread is nearly identical to those of decent 2011 and a horrible 2012.

The striking difference is that Santana is walking a full batter less per nine innings than he in the last FOUR years and the best numbers in terms of both BB/9 and BB% of any year but 2008 when he accounted for 6.0 fWAR.  In addition, Ervin's 47.7% groundball rate is the best of his nine year career....by a lot.   Santana's velocity has ticked back up to its 2010/2011 levels as well.

Is 2013 just 'one of those good Ervin years'?  Or is the dramatic improvement in control and higher ground ball percentage a sign of a real change?   While Santana is throwing his slider even more than in the past, that is a trend that started three years ago and the change in usage is not of any gigantic proportions. 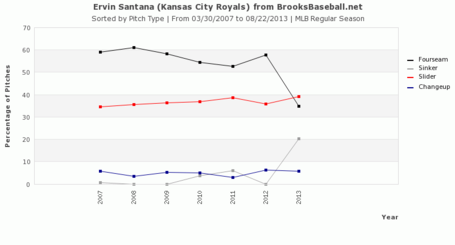 One has to be wary of new pitches suddenly popping up on these charts (Wade Davis, while struggling to baffle batters in 2013, certainly baffled Brooks and Pitch F/x early on), but given that Santana suddenly has a five percent better groundball rate makes me think it's quacking like a duck and might well be one.

Ervin himself has referenced throwing sinker several times this season to get a groundball.  It appears that perhaps he began working on it in the spring of 2011, used it that season, but went away from it in 2012 (possibly as a result of his injury troubles that year.

If the sinker is for real and with it a higher groundball rate and if you believe that Santana - as has been known to happen - is realizing better control with age, does that change your opinion about possibly pursuing him this off-season?

The variable are many beyond simply believing the 2013 results are sustainable.   How much do you believe in Duffy, Ventura, Paulino and, in time, Kyle Zimmer?   How much will Ervin command on the open market, both in terms of years and dollars?

If the Royals could do a Jeremy Guthrie deal with Santana, I would be all over it, but I think he will get much more than that.   Three years and $45 million would not shock me - I don't think I would advocate the Royals paying that, but it would not shock me.  Would you consider a 2/$28 million?  Would Ervin?