It is like the Royals value Frenchy 's and Yuni's tool set.

Share All sharing options for: Royals and Drafting College Hitters

Over at Crawfishboxes.com (the Astros site on SBN), Anthony Boyer looked at the college hitters drafted by each team. The hitters' 2012 college stats are compared to their 2013 professional stats. Here are the average team stats from the players drafted. 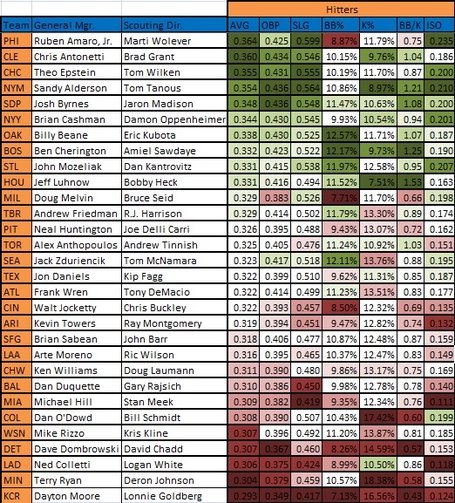 Here is a good explanation of the studies limitation:

I would discourage readers from taking the conclusions of this article too far. Not only have personnel changed for many of the teams involved (even the Astros, with Mike Elias replacing Bobby Heck as scouting director), but the sample sizes are very small, in any case. For instance, the Royals had just five college hitters in our sample, and we're only looking at their first year of professional ball.

Sorry for the dark red shading making it hard to read the numbers, but being last has its privledges. Besides the actual values, here is how the Royals ranked overall

At least they weren't last in every category.

I don't think these results will surprise anyone who has followed the Royals for any amount of time. The Royals just don't care about college stats, especially ones involving plate discipline. This past June, they waged a war on walks and here are some quotes from that war.

"When you're looking at the impact guys in the first couple of rounds," Picollo says, "you look at the major tools. Can he square up a ball? Can he hit for power? What's his speed? Can he hit consistently? All those things.

"You have to have the tools first or it really doesn't matter. Now, when it gets to later rounds, when the talent gap isn't that much between players, that area (on-base percentage) has more of a chance to stand out and it may separate one player from another."

Moore and Picollo also suggest the low-walk totals aren't reflective of any flaw in the developmental approach.

"It's more nature vs. nurture," Moore says. "Some guys just have that natural discipline, guys like Alex and Billy. It's not something you can necessarily teach, though we do preach plate discipline throughout the minor leagues.

Maybe the Royals drafted these hitters as buy low options and planned on turning them around. Here is how the players are doing so far in 2013: 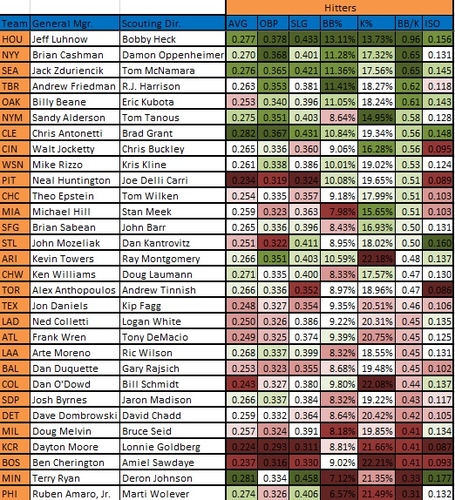 And the new ranks

Holy Cow, the Royals ranked out the bottom four in one of the categories. Rejoice and gladly sing Moore's name.

Ah fiddlesticks. I know I shouldn't put too much weight into this data. It is just another puzzle piece which shows the Royals continued ignorance of the value of good plate discipline.