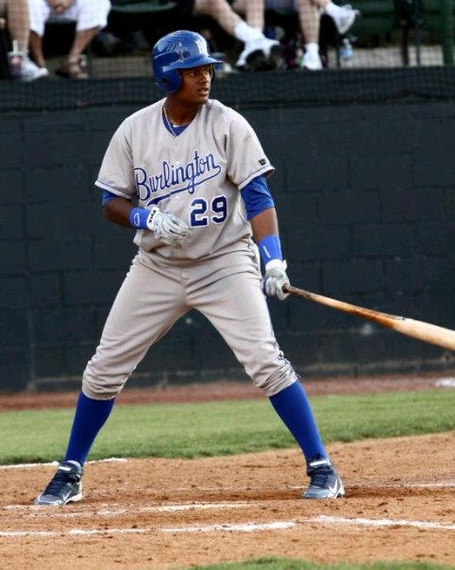 But there is a chance that Jorge Bonifacio could help offset losing Wil Myers.

I know, I know... that doesn't make the trade any easier of a pill to swallow, and it's not like the Rangers case where trading Profar isn't so bad because they have Kinsler/Andrus there, but give Boni a chance.

Bonifacio doesn't have the full power bat that Myers does, but he has been touted as having plus raw power. That hasn't translated to game power yet in Bonifacio's career though.

Some scouting reports on Bonifacio though do make him sound like a potential solid outfield bat.

"He’s a middle-of-the-line-up guy, most likely a No. 3 hole hitter," the contact said. "(Bonifacio) drives the ball to all fields, with very loose hands, bat speed and good pitch recognition."

"The Royals’ right-handed hitter is listed at 6-foot-1 and 195 pounds, but there’s no doubt he’s taller and heavier. His frame is thick and unprojectable with the majority of his bulk concentrated in his upper legs, in his rear and in his midsection. At his best, Bonifacio has a controlled, hands-driven swing with natural loft that could produce between 15 and 18 home runs, along with a good batting average without selling out for power.

As he matures, Bonifacio’s swing will too. And so will his body. Right now, he’s easily an above-average runner, but whether he will retain his speed is a major question. Given his present size and his age, it’s easy to see him outgrowing right field should his athleticism dissipate.

The general consensus on Jorge is that he provides plus power with decent bat speed, a good arm, and average speed. Although most evaluations of the young righty say that his body is too heavy and as he ages, he'll slow down (won't we all...).

What's Bonifacio done to compare him to Myers? Strangely the two have followed a some what similar path through their minor league career.

Bonifacio, at this point in their respected careers, had an extra 70 games on Myers of development.

At age 18 both made debuts in Burlington. Bonifacio's was for 62 games, while Myers spent 18 games at Idaho Falls and 4 in Burlington after being drafted a month earlier.

At age 19 both debuted in Low-A. Bonifacio in Kane County (now Lexington Legends) and Myers in Burlington with the Bees. Both hit for nearly the same batting average, but Myers displayed much more power and wasn't long for the Midwest League as after 68 games he went to Wilmington and the Carolina League of High-A while Bonifacio would spend his whole age 19 season in Low-A.

At age 20, both Myers and Bonifacio made it to AA and both suffered injuries. Myers spent most of the season hurt with a knee injury after slipping on a wet floor, while Jorge suffered a 6 week setback with a broken hamate bone suffered during batting practice. While Myers never really bounced back in his age 20 season, Bonifacio came back to Wilmington and hit well enough to get promoted to AA where he has been since August 1st.

It's pretty clear that Myers has been the better minor league player by age 20, but Bonifacio has very much held his own. While he might not tout the upside of Myers, Boni profiles are an every day right fielder, and a really good steal for a $135K signing bonus.

Where does Bony (yes if Ned Yost is still around, Bony will be his name ((double parenthesis - isn't bony/boni the same thing?)) ) go from here on?

You'd have to imagine he starts next year in Northwest Arkansas, where he'll still be 20 years old, with an eye for Omaha a few weeks after his 21st Birthday in early June. While he's much more likely a 2015 Royals player with a very small chance for what Starbucks would call a "short" cup of coffee in 2014. That's more than likely the best case scenario for him, but all eyes should be set on seeing him in the outfields of Kauffman by 2015.