After a brief sortie into New York, the Royals return home to face the Twins for the fourth time in seven days.

The Royals only need to win two of the next four games to meet Dayton Moore's prophecy of a 15-5 post All-Star Break run. Given what the Detroit Tigers and Cleveland Indians have done over the same period of time, Kansas City needs to do better than go just 2-2.

Frankly, with three games against the Twins to start this homestand and three against the Marlins to end it, one has to be thinking that the boys win five of those six. Do that, and a split of a four game set with Boston, the owners of the best record in the American League, in between and it would be successful string of games. As hot as the top three teams in the A.L. Central have been, somebody is due for a 5-5 or maybe even a 4-6 stretch. Let's hope it is not the Royals.

If we are going to scoreboard watch, let's do it right:

The Indians open a four game series at home against Detroit tonight, followed by three more in Cleveland versus the Angels and then three on the road at Minnesota. The Tigers' four game trip to Cleveland is the start of a ten game road trip that includes three at the Yankees and three in Chicago. The Royals probably have a bit of advantage schedule-wise over the next ten days. To be honest, if they don't make ground up during this stretch, the playoffs may simply be a bridge too far this season.

The pitching staff certainly deserves a lot of credit for the Royals' post-break run, but it has helped to have a resurgent Mike Moustakas make an appearance as spring turned to summer. Some Moose splits:

There are a multitude of factors that go into the Royals have winning months in June and July, but Moustakas being able to, you know, hit the ball is one big one.

Traditional somewhat meaningless but interesting split:
Fun Mike Moustakas stat to amuse the old guy next to you at the game tonight: The Royals are 7-2 when Mike Moustakas hits a home run (or two).
All of the above are numbers that can easily be explained as a streak hitter on a hot streak and, to be clear, Mike's hot streak is roughly equal to what Eric Hosmer has turned out to be doing all year minus some 'slug'. However, I did find one interesting small sample data point over at Brook's Baseball.
Following is Mike Moustakas' swing percentages by zone from April 1 to May 31: 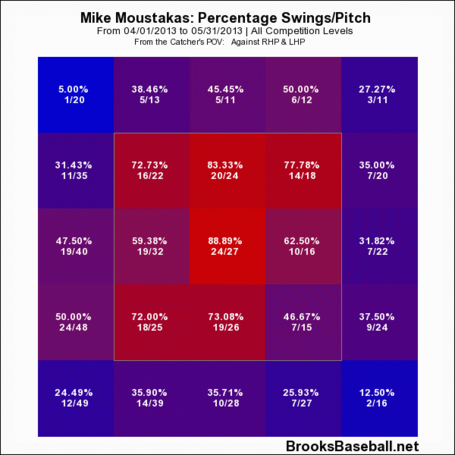 And now the same chart for June and July of this season: 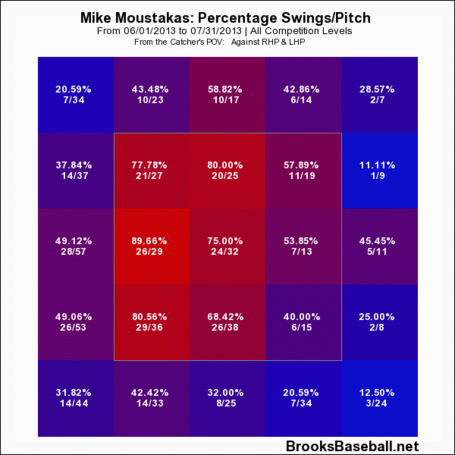 What stands out to this untrained mind is that Moustakas has been swinging far more often at pitches on the outside portion of the strike zone: particularly middle-out. That would seem to be a good thing for a left-handed pull hitter. And yes, that paragraph changed from the original rendition.

Tonight, Jeremy Guthrie and Kevin Correia square off. Last Wednesday, both pitchers allowed just two runs over six innings with Guthrie coming out with the sacred 'win' and Correia getting a pesky 'no decision'.

Game thread will be up in a bit.