You coulda been more gnar, braj

Share All sharing options for: You coulda been more gnar, braj

The focus of the night was on Danny Duffy returning to the majors for the first time since his Tommy John surgery a little over a year ago.

Talk on the broadcast was how "amped" Duffy was for this start. His velocity did reflect just a bit of adrenaline. 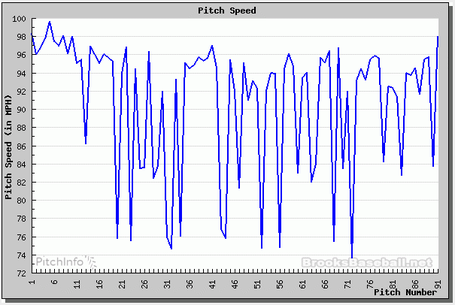 Duffy hit 99 on the radar gun and averaged 95 mph on his four-seam fastball. That's right where he was before he landed in the operating room.

However, we know the velocity returns faster (pardon the pun) than the command. This was again where Duffy struggled. Yes, he whiffed seven batters in 3.2 innings, but he had major issues locating his curve for a strike. Of the 11 curves he offered, only two were strikes. 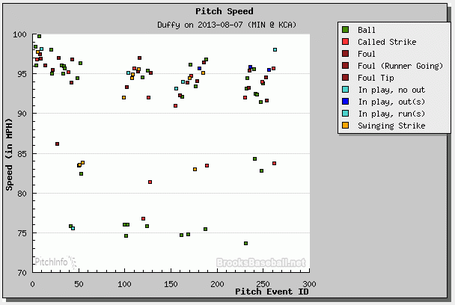 To me, it felt familiar. Duffy jumped ahead in the count to 12 of the 19 batters he faced, but had difficulty sealing the deal. The Royals put Duffy on a pitch count limit in the 90 to 100 range. Naturally, the pitches piled up as the Twins fouled off 18 pitches. He has electric stuff, but just lacks the ability to put away hitters in a prudent fashion. Duffy's pitch count by inning:

Ninety-one pitches and he couldn't finish four innings. The command simply wasn't there. Duffy wasn't exactly the kind of pitcher who had quality command before his injury. And since command is usually the last thing that returns following the Tommy John, it may be a little more difficult to track his progress.

Even though he whiffed seven and allowed just two runs, I can't get on board with this start. It was very Wade Davis-esque.

The positive: the stuff is there. Hopefully, he can learn how to spot his command better and use that stuff to close down opposing hitters in a more economical way.

-- The debut of whatever marketing gimmick honoring Gordon (to replace the now-defunct Frenchy Quarter) the Royals left fielder picked up a home run and a double. Clearly, this marketing works.

-- Kelvin Herrera scares the crap out of me. It's one thing to watch that high wire act with a three run lead, but still. And Luke Hochevar warming up in the pen behind Herrera? Pepto Bismol time.

-- The Royals have now won 15 of their last 20. Just like Dayton said would happen. Look for more on this tomorrow.