Can he get his release point some what consistent?

On Tuesday night, James Shields struggled against the Twins allowing seven runs on eight hits (three home runs) and two walks. From the start of the game, he just seemed off and was struggling with each batter. After looking at his Pitchf/x data, his struggles begin with an inconsistent release point.

As a whole, Shields has the signs of a healthy, consistent pitcher.  His velocity has been constant over the season. He is throwing more strikes than he did in 2012 (Zone% is up from 45% to 48%). Some of the first items I normally check showed no signs for concern.

One item I noticed though was his release point for the game on the 6th was considerably different from the one for his start on the 1st.  I went back and looked a little further. Here are the release points from his last 6 games (dates on the top of images):

His release points on the 6th were consistent with some of the previous image, but not all. He seems to have a problem throwing from the same spot all season. Here are the graphs of his 2013 vertical and horizontal release points. 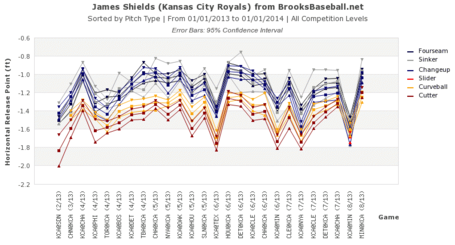 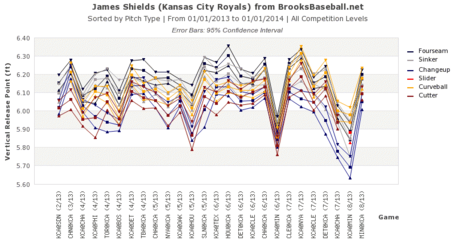 This is not the first time the 31-year-old has had problems repeating his motion. I noticed the problem this past off season at FanGraphs.

By additionally looking at [Shields'] 2012 Zone% and Late Game Consistency, he showed signs he was inconsistent in his release and couldn't get pitches over the plate. His problems could be the indication of an injury or the possible causes of one.

Shields seems to generally be able to pitch decently even though he is using different mechanics from week to week.

Personally, I would like James Shields to find a delivery which works and stick to it each and every game. By moving around his arm and position on the rubber, he is relearning his delivery and pitches each game. He should be able to just pitch and know how pitches will perform and it not be a new experience every time he takes the mound.

H/T to brooksbaseball.net for the Pitchf/x images.