Put the rest of the season on television.

Share All sharing options for: A plea to Fox Sports Kansas City

I understand why your network doesn't schedule the games played on September weekends. Historically, the Royals are long buried by the time September rolls around. There isn't much of an audience for a team playing out the string on a 90 loss season. I understand that football - college and professional - has eclipsed baseball as America's sport of choice. Given the opportunity to choose between football and baseball, I'll go with baseball. For me, it's no contest, but I am in the minority. I understand that putting baseball game number 155 up against week two of the NFL is ratings suicide.

However this September, as you are most assuredly aware, things are different.

The Royals are the hottest team in the American League since the All-Star break. They are a handful of games out of the second Wild Card spot. The odds of them qualifying for the post season remain slim because there are too many teams ahead of them in the standings. Yet as long as the Royals remain mathematically alive, there is hope. And as long as there's hope, there will be viewers.

At the All-Star break, FOX Sports Kansas City General Manager and Senior Vice President Jack Donovan said, "There is a heightened level of excitement around and interest in Royals baseball, and that shows in the increased viewership."

Don't you think if interest was high in July as the Royals were crashing to the break, it's astronomical as the season draws to a close with them in the Wild Card hunt.

Thankfully, there have been others who see the value in the Royals attempt at relevance. This Saturday's game will be shown on the MLB Network. Sunday's game will be on TBS as part of a national broadcast. While this is certainly a positive development, it looks bad for Fox Sports Kansas City to be on the sidelines. You can't just stand by and hope that other networks will pick up the broadcasts.

Here is a list of some of the highest rated games in the history of Fox Sports Kansas City. Notice a trend? 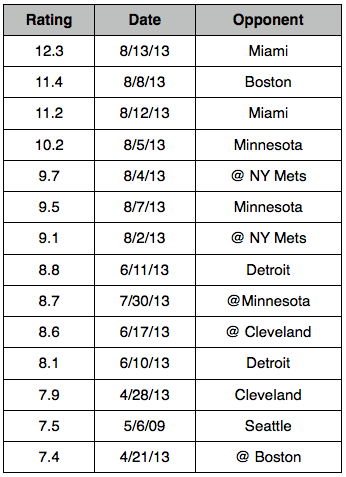 Entering this season, the highest rated Fox Sports Kansas City broadcast was from 2009 in a game against Seattle. This year at least 12 games have drawn a higher rating.

You send me press release after press release trumpeting the broadcast's success this season. A Tuesday night game in August against the Miami Marlins peaked at a 25 share in Kansas City. A quarter of all television sets in use on a Tuesday in August were tuned in to the Royals. For some perspective, the highest rated national TV program last year was NBC's Sunday Night Football and it pulled a 20 share nationally. A quarter of all sets in use doesn't sound like a lot, but with fragmented media options available, it's a massive number. And it's a number never seen before in Kansas City.

In the last email you sent me from mid-August, Royals broadcasts were averaging a 6.4 rating for the season. That number is up over 65 percent from 2012. A 65 percent increase in television viewers. This is simply a massive number. I know attendance at the games don't necessarily reflect the improved product on the field, but the TV ratings are a clear sign this city is behind it's baseball team. (There are myriad causes for steady attendance this season. That's a topic for another post.)

The Royals are relevant in September for the first time in ten years. As long as they are mathematically alive, this is a meaningful September. Hell, they sent season ticket holders the info for ordering post season tickets. As the Royals chase October for the first time since 1985, not having games on television down the stretch would be embarrassing.

The fans have responded to this season by tuning into your broadcasts in record numbers. It would be bad business if at the most crucial moments of the year, you abandoned the fans. Extremely bad business. Wouldn't it be a great gesture of goodwill to reward those fans who have provided you with record ratings with weekend baseball in September?