Your exclusive, up to the minute, breaking Wild Card standings:

Since 13-5. Are you kidding me? This team is knocking on the door of another 15-5 stretch? I'm not going to have to apologize again as much as I'll have to become Dayton Moore's butler to repay my debt.

The Royals are off today so we can catch our collective breath before they move to Detroit for a three game set with the Tigers. 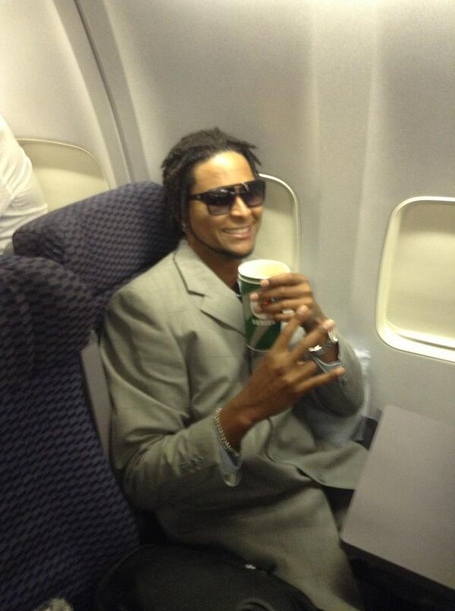 From all the airplane photos Erv Tweets, I imagine him flying on road trips on a private jet, leaving his teammates in some Southwest Airline circle of hell. So much swag.

On to the match-ups we care about today:

I'm starting to think we need the Yankees to lose for a couple of reasons. One, it would be a split of the Baltimore series which would keep two teams kind of sort of treading water together at a crucial junction of the season. Two, the Yankee schedule sucks for everyone not a Yankee fan. Seriously. I mentioned this the other day, but it bears repeating. Here's how the Yankees end their season after their game today in Baltimore:

OK, the Boston series could be big. The Red Sox are clearly on a roll and they feature the best offense in the AL. Toronto is playing better, but they're playing for pride. The Giants are meh and Houston is horrible. That leaves the Rays and who knows where they'll be in a couple of weeks. It's a really favorable schedule for New York.

The Tampa death spiral is Schadenfreude for The Trade. I used to respect Tampa and looked at their success with envy. Why couldn't my team do something similar? Then, their fan became insufferable, The Trade happened and Mike Carp crushed a grand slam.

Speaking of easy schedules, here's how things line up for Cleveland:

Wow. The perks of the AL Central. That's why it was so vitally important the Royals take two of three. And it's why I'm still ticked off at Frank Yost for the Carlos Pena pinch hit shenanigans in the opener. Those closing 10 games... Damn.

The Rangers are off before opening a three game series against the A's at home. Texas has won two of 10 games this month. I'm telling you, both Wild Cards are in play. This is a good thing, obviously. Yes, the Royals still have to leapfrog teams, but throw another struggling leader into the mix and you are simply opening options. It will still take a massive run (or continuation of a massive run) but playing for one of two spots instead of one of one is a good thing.

Scoreboard watch is on.