He can throw hard.

A am just going to take a peak on Yordano Yentura pitches over the night.

Not real surprised there. Pouring over the rest of the data, two items stick out. First, it looks like Ventura possibly threw 2 to 3 different fastballs. He threw his heater  at +97 mph and then a slower pitcher around 93 mph.  Here is a graph from Brooksbaseball.net showing the differences over the course of the game: 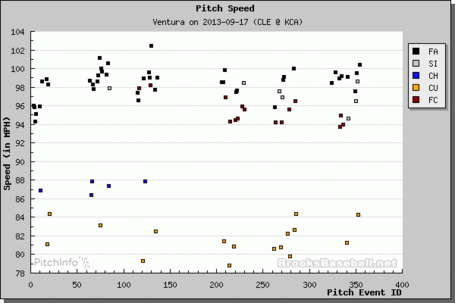 I have never heard of Ventura mixing in a sinker and/or cutter. IMO, I think he was taking a little off the pitches, and using a lower release point.
Which brings me to the second find, his release points varied a little more than I would like to see. 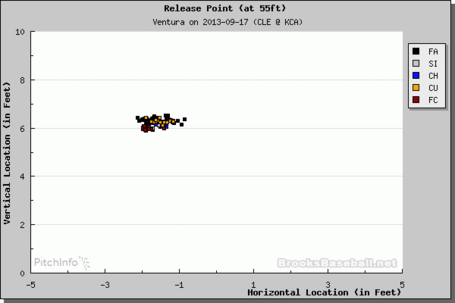 It can be noted the "cutters" were released from the 3B side which could give them a little more side spin and less overall velocity. He was basically creating a second pitch by dropping his arm. Now, does he intentionally want to do this or not is the $100,000 question.
Otherwise, not much else stuck out.