A lot of the same.

Share All sharing options for: Royals Rankings in the Fan Scouting Report.

First off, it is nice to be in the playoff hunt, but the chances right now are just slim, and got slimmer with Texas and Tampa Bay winning last night. I believe the Royals will need to win out and two teams will need to stumble some. In my mind each game is an elimination game. Lose and the season is done. Win, and they may have a chance.

I am taking a reserved following for the Seattle series. This is when the team needs to do the hard work. Just grind out every win and hope the other teams begin to falter. The weekend is when the emotions can be high or already smashed. It has been a long season and this week may end up seeming forever.

While votes can still be tallied at The Fan Scouting Report, today I will look at how the Royals are doing and compare the data to previous seasons. Also I will compare other defensive values and see if there are any disconnects between our eyes and the computers.

First, here is the results of the voting so far.

As a whole, I personally agree. My few disagreements would be:

Additionally to the 2013 values, here is how some regulars have rated over the years. 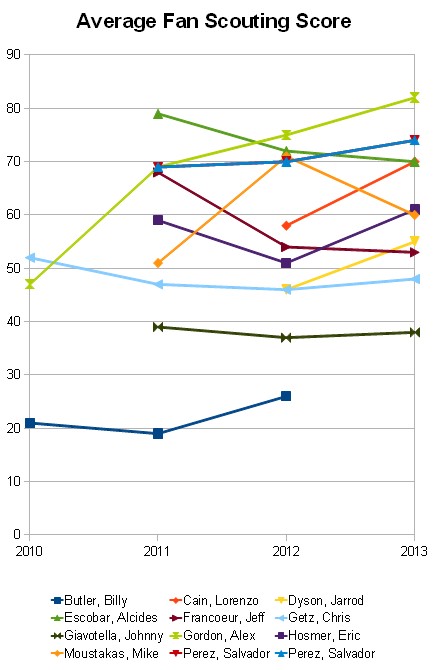 Some up, some down, not a ton of changes.

Finally, here is a quick look at how the fan voting compares to UZR values.

Note: Defense takes into account Position and Defensive ability. UZR just compares the player against others at the position.

The same great arm values from the last two seasons, but the range value has increased over 30 runs or

~3 wins. See how the French can bring people down.

The Royals overall defense may end up historically good (an article for once the final numbers are in), but I tried to give a look at how the Fans rated the Royals position players. Oh and .... GRASS CREEK IS OURS.