The Mariners and Royals look to finish out the three game set tonight in Seattle.

At some point this evening (or early tomorrow morning Central time), it is very likely that the Kansas City Royals will be officially eliminated from playoff contention. What had once been hope became a longshot and then a pipe dream, will turn into a mathematical fact.

The math might not catch up to the Royals for another day, maybe two, I suppose, but it will. Somewhat selfishly, I'm hoping for 85 wins only because I can use next Monday to link back to Royals Reviews' pre-season picks and say: "See, 85 wins, just like I freaking said!" Of course, my pick for Albert Pujols to win the A.L. MVP will be conveniently censored.....

While the official end of playoff contention may or may not come tonight, we are certainly going to witness Ervin Santana's 32nd and last start of 2013 and, almost as certainly, his last start as a Kansas City Royal. In exchange for Brandon Sisk and $13 million, all Santana has done is post the second best season of his career.

You can survey pretty much any part of Ervin's statistical line and find very little to dislike. Virtually every one of Santana's stats (old, new or irrelevant) are either the best or second best marks of his career. His velocity ticked back up to pre-2012 levels and his home run rate regressed (in a good way) back to his career norms. All of which, in no small part, can be traced back to tremendous control and a career high ground ball rate. Is it all just one of the 'good' years in a rather inconsistent career? Or the result of (as I have opined before) this: 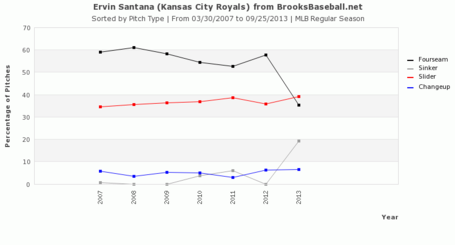 Who knows? Maybe Ervin, maybe not.

What we do know is that Ervin Santana has stumbled upon some tremendous timing. He has posted one of the best years of his career, pitching for a contender (or a semi-contender anyway), while on the brink of free agency going into a winter where free agent pitching is looking to be a pretty shallow market. Edwin Jackson got 4/$52 million last winter: Santana will get more than that.

He is going to get more than the Royals can offer and, as many around here will certainly agree, more than they should even consider. Ervin might be a changed pitcher, or he might just be the same old Santana coming off one of his good years. Turning 31 this December, Ervin will certainly be eyeing this off-season as his last big, long-term contract. Discounts in either years or dollars, would seem unlikely and, for Ervin personally, unwise.

That's the nature of the business, boys and girls.

Santana has been a joy to watch pitch this season. He's cool. He interacts with fans. He doesn't throw hissy fits on Twitter. By all accounts, Ervin has been a great teammate (isn't it kind of nice to have 'good clubhouse guys' who can also 'play good baseball' for a change?).

Could the Royals have used that $13 million somewhere else? Yes. Would they have? Doubtful. That is all a debate from before and for later as well.

For now, as the Battle for Grass Creek rages one last time in 2013, I will sit back and enjoy one last Ervin Santana start. It has been some kind of ride.