The Royals General Manager thinks the offense is trending upward. Is it?

Over the holiday weekend, Dutton did some investigating about the Royals plans for 2014. It's September, so it's a general, lay of the land, type of article. Regarding the "core" portion of the roster, only Ervin Santana is eligible for free agency. The rest of the team is either under team control, arbitration eligible or signed to a contract.

Obviously, we've watched the team all year and we know the strengths and weaknesses. You have to think the Royals Brain Trust has crunched the correct numbers. There are some glaring holes on the offense and the team generally lags below average when it comes to putting runners on base, hitting for power and scoring runs. That seems important, right? If the Royals are intent on contending next year, they will almost certainly have to upgrade the offense in right field, second base, shortstop and third base. They probably can't afford to upgrade all four. Maybe they will address three positions. At the very least, two.

"You certainly try to add a player or two, but I think our offense is trending upward. I think it will get better as we move forward."

The old "Magic Beans" meme comes to the surface.

"Magic Beans" are how things happen in Dayton's world. There's no rhyme or reason behind the ends. It just happens because it's what is supposed to happen.

As Royals fans, we know that's not exactly how it works.

As I am wont to do, it's time to put another Moore statement to the test. About that whole "trending upward" thing, here are a few charts I whipped up this morning. First, here's the Royals team average runs per game broken down by month in comparison to the rest of the league. 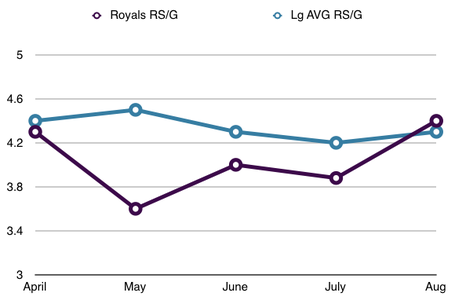 Fair April then three consecutive months where they were well off the league average in runs scored. They finally bettered the league in August.

Next, let's look at Weighted Runs Created Plus. (wRC+) The definition can be found here, but the cool thing about wRC+ is we know the league average for any given month is 100. It's also park and league adjusted. Here's how the Royals have done this year. 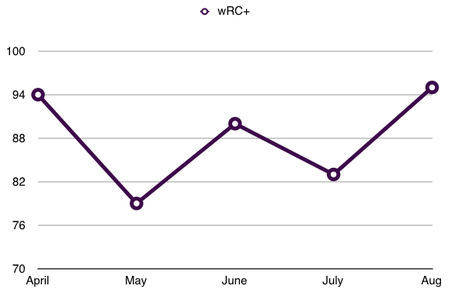 This graph pretty neatly mirrors the runs per game graph a little higher in the post. Naturally. Except here we see the Royals have yet to have a league average month in creating runs. If we're being honest, they haven't come close to average.

OK. If the above chart is a little too sabermetric for your liking, let's use a different metric. For the next chart, I'll use OPS. It's not ideal, but for the purpose of this - where we're looking for Dayton's "trends" - I think it works. It combines on base percentage and power. I included the league average as a benchmark to see how the Royals are doing against the rest of the American League. 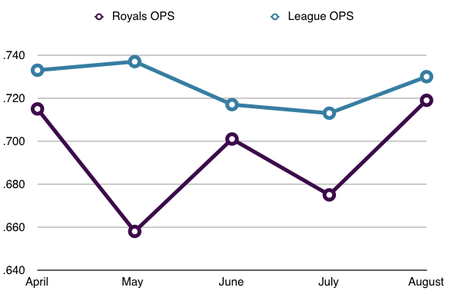 Again, this graph looks like the ones proceeding it in this post. April and August were the strongest offensive months and May was abysmal. And like the wRC+ graph, the Royals haven't once had a month where their on base percentage and slugging percentages combined were equal to the league average.

Unfortunately, Moore isn't talking league averages. He's talking trends. And if you place August up against the four previous months, there certainly is a trend. Pick a metric and August is better than any other month. I suppose that can be a trend.

The problem is, Dayton seems to cherry-pick his "trends" and usually to disastrous results. Like his player acquisitions such as Willie Bloomquist who was an "on base guy" simply because he had one season out of six where he bettered league average. Granted, he's done less of this lately, but damnit if I don't have a difficult time trusting him and his analysis.

Because even if we go back to last year, the "bigger picture" offensive trends remain disturbing. The only key regular who is outperforming 2012 is Eric Hosmer. Runs scored per game last year was 4.17. This year, the Royals are at 4.04 R/G. In 2012 their wRC+ was 93. This year, it's 94. Looking at their wOBA, last summer it was .311. This year, it's .314. OK. So by sabermetric measurements the Royals are improving. But can we call one point here or a couple hundredths of a point there improvement. Is it a trend? Sure those numbers can improve if the "trend" we saw in August holds and September is another strong offensive month. We will have to wait and see. Based on five months of evidence, color me skeptical.

The deeper takeaway here is Moore is obviously trying to keep expectations in check regarding off season player acquisitions. It's the smart move. He's a small market general manager and while there will be money to spend, he can't come out in September and talk about splashing the cash. It just doesn't make sense for him to do that. What does make sense is this statement from him in the same article.

Yes, the offensive trend has been positive. For a month. For 2013, the offense has been erratic and below average. Just like 2012. There may be some positives Dayton and his staff sees, but if they are content on entering 2014 with the same offense they had in 2013 (and for the most part, 2012) then the Royals will be destined to stand outside the contenders yet again. Pitching and defense be damned.