Royals revisit scene of the crime

Share All sharing options for: Royals revisit scene of the crime

On July 9, the Royals won the second game of their four game series in New York to move to 43-44 on the year. It was the second time they pulled to within a game of .500 following their catastrophic month of May. They lost their last two games to split the series with the Yankees before they rolled into Cleveland. The final three games prior to the All-Star break were not enjoyable.

To say the Royals stumbled into the break would be kind. It was the ultimate downer to close the first half. It led to a mass exodus from the Royal Plaza Parade Planning Committee and was part of the impetus behind yours truly penning some hate mail to Dayton Moore.

Since the resumption of baseball, post break, the script has been flipped. 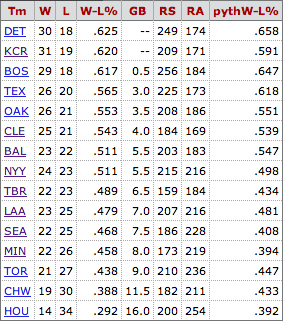 The Royals have won more games than any team in the American League since the All-Star break. Yeah, it's a semi-arbitrary endpoint, but this isn't like looking at the standings where they have the "Last 10" column and exclaiming since X team has won seven recent games they are the hottest thing going. This is a legitimate sample of ballgames. The Royals are hanging with a legitimate sample of teams. Detroit, Boston, Texas and Oakland are all in pole position for October baseball in their own ways.

Despite the post All-Star tear, there is plenty of unfinished business.

The Royals haven't seen Cleveland since that fateful Sunday in July. For the season, the Royals have just five wins in 13 attempts against their Central division nemesis.

This is a key series. The most key series of the 2013 season to date. The Royals must take two out of three. Really, they have to sweep. Yet two out of three would still be a largely positive outcome and would keep the Royals in the race for the Wild Card. As I've been noting for the last month or so, the Royals playoff odds are slim. Like on life support with a priest in a corner hovering like a vulture waiting to administer last rites slim. This is the moment where the records since the All-Star break don't matter at all. This is the moment where the only thing that matters is Monday's game. Win and things are good. Lose and the pressure mounts to stave off the brink of elimination.

It's not revenge. It's footing. It's gaining an edge in a freaking pennant race. Monday the Royals continue a stretch where they play 15 games against post season contenders. So far, they are 2-1.