• Dayn Perry at CBS's Eye on Baseball created the Royals all-time single-season team. Here are the players he chose.

My only complaints are with the pitching selections. Cone and Leibrandt don't belong on the list. I would go with 1977 Dennis Leonard and 1974 Steve Busby. With the relievers, I could see adding 2007 Soria. 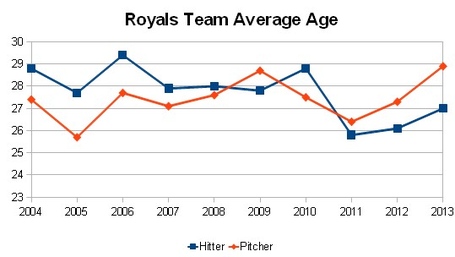 I don't see this trend ending in 2014 with most the team returning, the additions of Jason Vargas (31), Omar Infante (32) and Norichika Aoki (32) and not much youth being added besides Yordano Ventura.

• Recently Conor Glassy wrote a couple of interesting articles. First, he lists the number of drafted players to make the major leagues. Surprisingly the Royals came in 10th (75). I figured they would be a bit lower. The Royals sad "Interesting" tidbit was on the lack of starting pitchers the team produces.

Since 1996, the Royals have drafted the second-fewest pitchers to make 100 big league starts, with two (Zack Greinke & Luke Hochevar). They are tied with Cincinnati (Homer Bailey & Mike Leake), Cleveland (C.C. Sabathia & Jeremy Guthrie) and Milwaukee (Ben Sheets & Yovani Gallardo). The only team with fewer is 250 miles east on I-70-the Cardinals have just one so far, Dan Haren.

Not a surprise at all.

In his second article of interest, the Royals ranked 15th in the league in scouts who played professional ball. The most interesting piece of information is the team employs 23 scouts with some teams higher, Red Sox and Cubs, and some much lower Nationals and Astros.

• Jeff Sullivan at FanGraphs found the 2013 Royals catchers cost the team around a half a strike per game (23rd overall) in pitch framing compared to the league average.

• Slugger was ranked the 5th creepiest mascot in the majors.

Here is some bad baseball acting on Jimmy Fallon.