What Will Ned Do With Replay?

How much will he challenge the umps?

Share All sharing options for: What Will Ned Do With Replay?

Baseball has finally decided to implement instant replay. Finally, baseball decided to join the 21st century even though its commissioner hasn't yet. The most interesting aspect of the ruling involves challenges before the 7th inning. For the first six innings, the manager must initiate the change which brings us to today's question. What will Ned do? 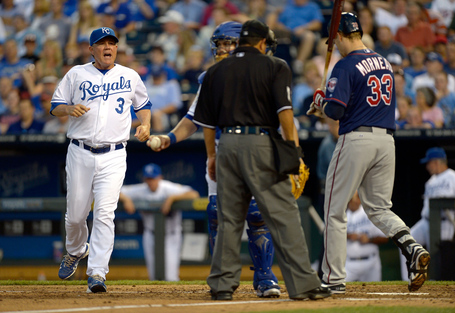 To start off let's get the rule down. According to MLB.com:

Beginning this season, each manager will start a game with one challenge. If it is upheld, he retains his challenge but can never have more than two in a game. If the manager exhausts his challenges before the start of the seventh inning, he is out of luck, adding a new element of strategy to the game. Beginning in the top of the seventh, the crew chief is empowered to institute a review.

So each manager has up to two calls a game they can have reversed. A few years ago, ESPN studied how often instant replay would be needed. They looked at 184 games and found the following:

But the "Outside the Lines" analysis found that an average of 1.3 calls per game were close enough to require replay review to determine whether an umpire had made the right call. Of the close plays, 13.9 percent remained too close to call, with 65.7 percent confirmed as correct and 20.4 percent confirmed as incorrect.

Taking the data, I will do a little crazy math:

So the real question is, would Ned use his challenge(s) on the game's first play if it is close play at 1B? Looking at the numbers, damn right he should. Not many chances come along for the Royals to get a call to go their way. What if the play was pretty close and the team has a 75%% of being right? 50%? 25%? If he loses, he won't have another chance to challenge. What if there is another opportunity later in the game and he can't challenge? Would the lack of grief from the possible chance of being roasted by the media, fans and his players be higher than getting an extra base runner or out earlier in the game? In the slim chance he gets too challenge happy, would he begin to piss off the umpires? I could totally see him going by his gut and using the flag just whenever he sees fit.

Truthfully, I think the Royals should totally take the call out of Ned's hands. During a presser before the season starts, the team should say the call will come from a Royals repay employee. He will just tell Ned if the call needs to be reviewed. Ned just goes out to the umpires and says, "The desk jockeys tells me you should look at the last play". Also, the Royals should state they have looked at the historic data, not many calls will need to be reviewed, so they will use the challenges for each play they believe they can win. They will not hold onto them. If they happen to not have one later in a game, every one (media, fans, team) understands their policy.

The 2014 season will have the added wrinkle of instant replay. How the Royals use their challenges will be interesting. An open and publicly understood policy is the only way for the team to limit public scrutiny .... so I totally expect them to let Ned wing it.