Raul Mondesi's 2013 season and what to make of it

We talk about performance in terms of age relative to level, but how does Raul Adalberto Mondesi's 2013 campaign measure up to his fellow wunderkinder?

Share All sharing options for: Raul Mondesi's 2013 season and what to make of it

Sure, it was only 6% below-average, but he didn't tear the cover off the ball.

Some are unimpressed, citing below-average numbers as cause for trepidation. Generally speaking, an approach with trepidation is the best course, as planning parades four years out based on projections of prospects in A-ball doesn't really work out that well. This we know.

Back to Mondesi, though, it is probably instructive to look at what he did in comparison to his peers. After all, we're talking about a kid who spent the whole season in full-season ball and didn't turn 18 until the end of July. That's a real 18, by the way. There need not be any speculation as to what his real age might be what with him having been born in the US and all.

We all know who Mondesi is, but maybe Brendan Fraser's character in Blast from the Past just got connected to the internet and overheard the guys in the baseball card shop talking about the kid. So Adam, if you don't know who Raul Adalberto Mondesi is, here goes. As a slick-fielding shortstop who was playing against competition that was the average age of 21.6 years old in his Age-17 season, he had a .312 wOBA and a 94 wRC+. He was playing against guys almost four years his senior and holding his own at the plate while playing a premium position.

For comparison, the position players who were playing their Age-17 season in the Sally League were as follows:

Since Mondesi does just qualify as an Age-17 player (the cut-off is June 30/July 1), let's include Age-18 players in the Sally, counting any players, full season or not:

Let's extend it to the Midwest League.

That covers every prospect in full-season low-A ball this year within a year and three weeks of Mondesi's age. In 2013, there were twelve total position players who stepped on the field in the Sally League and the Midwest League combined who were in their Age-17 or -18 season. If we count the three games Justin Williams played, he was the third-youngest player to step on the field in A-ball.

Of all of the listed players, only two corner/bat-first prospects and one of the game's best prospects, Carlos Correa, were better at the plate. One of the two corner prospects only amassed 49 games at the level, starting the season in extended spring training.

That's just one year though.

Going back to the 2005 season, the following position players were no older than 18 through their whole full-season debut and played a full season (bold players were in their Age-17 season):

Not surprisingly, there are a lot of Major League regulars among the 17- and 18-year-olds. Looking at the list of players, Mondesi (and Carlos Tocci) is the first Age-17 player to spend an entire year in full-season ball since Wilmer Flores did in 2009.

In looking to compare Mondesi against the other Age-17 players who spent the whole season in either the Midwest League or the South Atlantic League, Mondesi ranks thusly in terms of wRC+:

Of the partial season guys, both Triunfel and Martinez split their seasons between low-A and high-A. They both performed well enough to rank above Andrus and Mondesi with their stints in low-A, but their turns in the next level up were not as impressive with Triunfel sitting at 83 in 50 games and Martinez chucking in a 78 wRC+ in 28 games to go with his 150 in 45 low-A games. 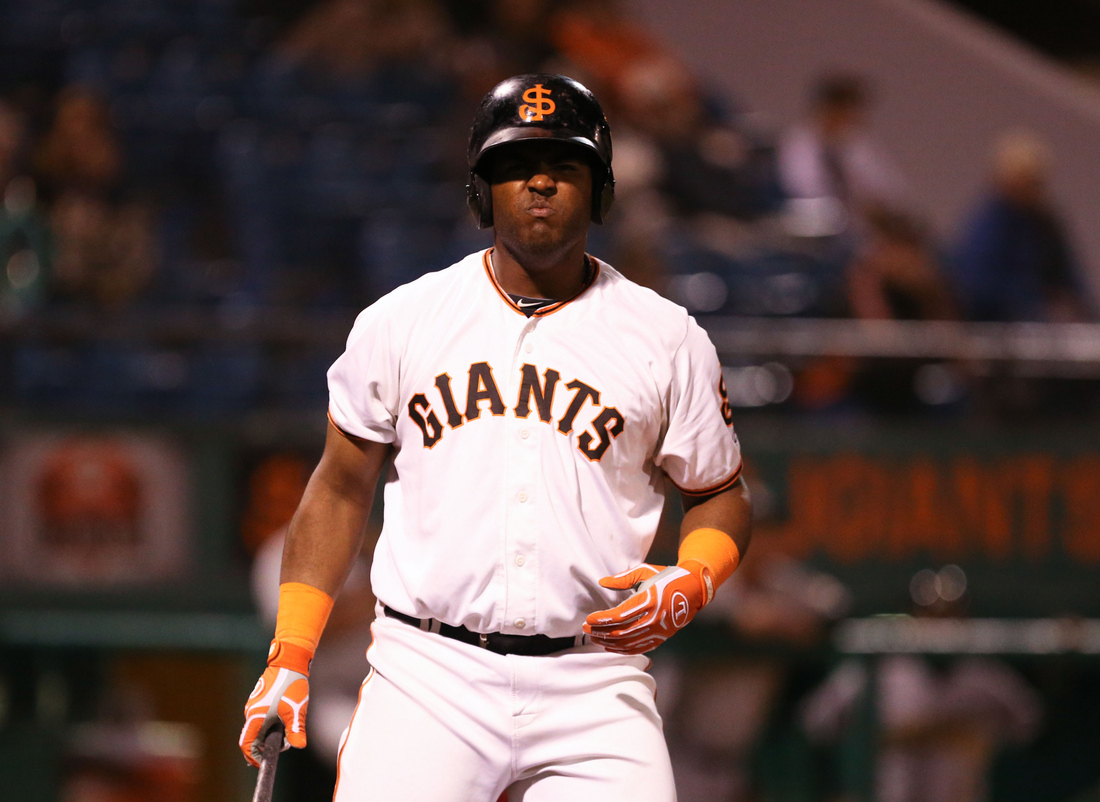 Murder was the case that they gave him. Photo credit: Kelley L Cox-USA TODAY Sports

Of those players, Tabata is a roughly 1.0 fWAR player, and Andrus has been worth 16.0 fWAR over his five-year career, though the bulk of the value is tied to his defense. As for Villalona, a murder charge in the Dominican Republic derailed his development for two years. He is back in the saddle, but it's hard for the first baseman to be used as a point of comparison for Mondesi. Flores returned to high-A two separate times after his mid-2010 promotion, but his past two seasons have given cause for hope. It's too early to say much of consequence on Tocci. Pena is a defense-first catcher and new Royal.

There is probably relatively little that we can learn about Mondesi through looking at all of the prospects who met the criteria above, other than to give us a rough estimate of the caliber of prospects that Mondesi finds himself among. There is, however, some anecdotal value in looking at prospects with similarities in both position and profile.

It is tempting to look at fellow middle-infielder Rougned Odor's 2012--which was very similar to Mondesi's 2013--and then what he did in 2013 and dream on what Mondesi's 2014 could be, but that's mostly going to be anecdotal wishcasting. The versions of Andrus and Odor seen in their first stints in full-season ball were pretty similar to what Mondesi did. Francisco Lindor, who was roughly eight months older for the level in 2012 than Mondesi was in 2013, is another highly-touted shortstop whose raw numbers in low-A ball weren't dissimilar from Mondesi's. He, too, took the next step at high-A.

Those three players were the closest comps positionally and offensively (with Escobar probably being in the mix) of the 17- and 18-year-olds. Andrus was the youngest relative to level, having about a month on Mondesi. Lindor was the oldest. If he can be somewhere between the three of them offensively, and given his profile there is definitely a decent shot at this happening, it doesn't take much imagination to see Mondesi rendering Alcides Escobar--or better yet, Mike Moustakas, not unlike the Orioles' phenom Manny Machado, who was almost precisely a year behind Mondesi on the development curve before making the leap straight from AA-Bowie to the Majors late in 2012--superfluous and possibly slotting in as a ~3.0 WAR player.