Sizing up the available starting pitching

Share All sharing options for: Sizing up the available starting pitching

With the free agent market for starting pitching all but frozen while the baseball world anxiously awaits Masahiro Tanaka's destination, it gives us ample time to size up the unsigned.

While the Royals maintain they are more than willing to stand pat, I maintain they need to add another starter to their rotation. That is, if they're serious about contention. The names still on the market amount to what has become the usual suspects in the winter of 2014: Matt Garza, Ubaldo Jimenez and Ervin Santana.

Each starter has their own set of strengths and weaknesses. From the Royals perspective, Garza was traded mid-season, so the Rangers were unable to make a qualifying offer. Santana was their starter last summer, so obviously the qualifying offer anchor doesn't apply if he rejoins the team. Jimenez received an offer from the Indians and like everyone else, turned it down meaning the Royals would have to surrender their first round draft pick (and accompanying bonus money) if they signed him to a free agent contract.

At the start of the off-season, MLB Trade Rumors ranked Santana as the sixth best free agent on the market (first overall for starting pitcher, non-Tanaka market), Garza seventh and Jimenez 11th. As such, they projected a five-year, $75 million contract for Erv, four years and $60 million for Garza and four years and $52 million for Jimenez.

That's a lot of cabbage for pitching. It's not crazy money given way the market was rolling in November and the early part of December. Yet with teams pumping their fiscal breaks, waiting for Tanaka to sign, it's also really kind of thrown a monkey wrench into the money projections. I don't think we normally see big money deals at this point in the winter. Sure there are one or two guys who sign late - like Prince Fielder a couple Januarys ago. But that was a surprise deal on with a surprise team. For one player. This time, there are four impact starters on the market. Waiting. And waiting.

While we wait, let's do a little compare and contrast. How about a look at the three based on FIP:

Finally, let's look at the batted ball types for each pitcher. First, Erv: 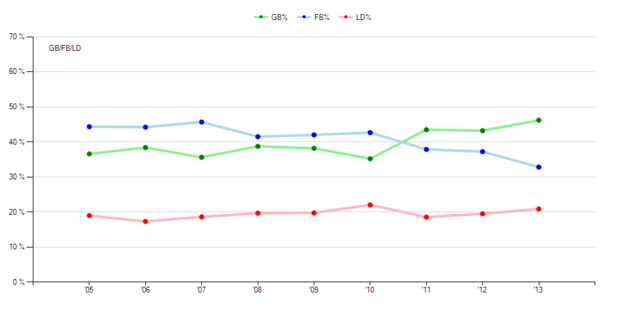 Santana was a fly ball pitcher for his first six seasons in the majors, then flipped the script in 2011. Then went ahead and posted a 1.97 HR/9 rate in 2012. If there's a reason GMs are leery of Erv, it's because his entire career has been completely unpredictable. He throws his fastball with some sink, can maintain his velocity out of the stretch, and has a killer slider we have come to know and to love. His mechanics are easy and he last made a trip to the DL in 2009. 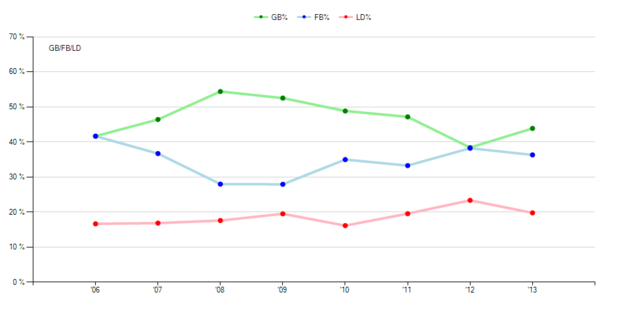 Jimenez was some kind of ground ball pitcher when he was with the Rockies. Then lost his ground ball touch when he went to Cleveland. I suppose if you're going to start allowing more fly balls, it's a good idea to do that after you move away from Colorado. His line drive rate also normalized a bit after a spike in 2012. Jimenez has seen his velocity drop since 2010 and is now throwing his slider more while mixing in a split-finger offering as well. He's been on the DL once in his career and that was for a thumb laceration. 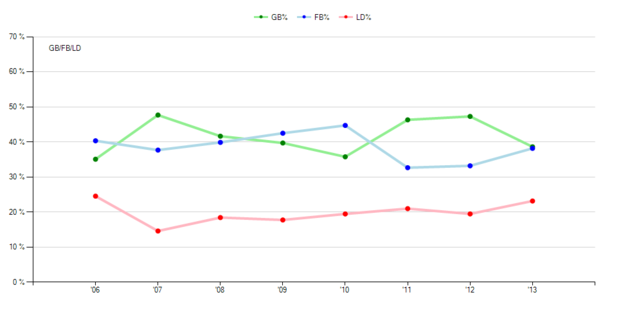 Garza's line drive rate has been creeping past the 20 percent mark. The dip in ground balls didn't hurt so much last year, as he posted a 12 percent HR/FB rate. Garza has a fastball that has consistently been in the mid-90s for his entire career, but he will catch too much of the plate with it. His curve is serviceable and his slider has potential, and is his weapon of choice when he's ahead in the count. His mechanics scream injury risk. Garza missed time in 2012 with a stress fracture in his right elbow and at the start of 2013 with a shoulder strain.

Of the three starters examined here, how do you rate them? For me, taking the qualifying offer into the equation, I think I go Santana, Garza and Jimenez. Garza has been steadier perhaps, but carries an injury risk. Santana has had some serious peaks and valleys throughout his career, but seems to have changed his approach and as we know, it was working. Jimenez rebounded nicely from a subpar 2012 and is once again a strikeout machine. Honestly, I would be happy with any of the three for the 2014 season. (I've changed my ranking of the three at least five times while writing this paragraph.)

It feels like the Royals should be in on all three at this point, with the goal of signing one. Add one of those arms to this rotation and you have a team that feels like a serious contender for 2014. But who?