A breakdown of Jon Lester: The Breakening

Share All sharing options for: A breakdown of Jon Lester: The Breakening

Is that a stupid title? It's probably a stupid title. You'll have to forgive me. The Royals have won a playoff game, and I don't know what to do with my hands, my legs, or my voice. I can't talk. But I know what to do with my brain. I can't capture a feeling in writing. I'm not that kind of guy. Josh Duggan in the recap thread captured feelings. Grant Brisbee captured feelings. Dick Kaegel captured the wrong feelings. I can analyze.

In my preview of Jon Lester, I wrote that the cutter would be Lester's main weapon. That's pitch we had to worry about. He didn't disappoint. Here's a table showing his usage distribution in the Wild Card game compared to his season overall.

Other than exchanging some fastballs for sinkers, Lester was pretty much the guy he's been all year in terms of usage. Lester's cutter normally generates swings about 52% of the time; the Royals swung at it 50% of the time. Lester's cutter is a strike (called or swing) about 66% of the time; it was classified as such about 63% of the time last night. Lester normally keeps the cutter down-and-in against RHH and low-and-away against LHH; he did exactly that last night. The cutter's velocity, horizontal movement, and vertical movement were all just about the same last night as compared to the 2014 season. The Royals struck out once against the pitch and got three singles.

The Royals swung at ~47% of Lester's pitches, which is very close to Lester's rate in 2014 and the Royals' rate in 2014. Unfortunately, about 46% of the Royals' swings were at pitches outside the strike zone (according to Baseball Savant's zone definitions). That's awful. The Royals had problems recognizing a strike from a ball. 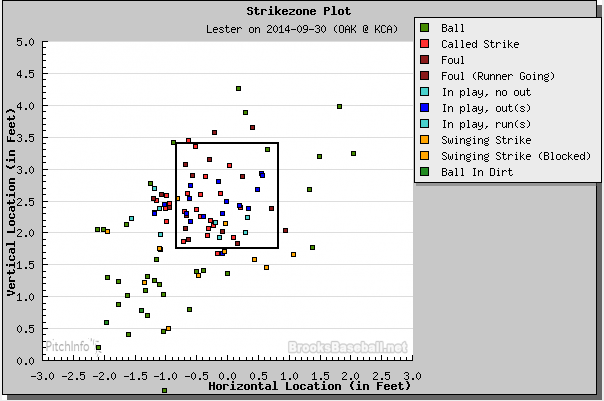 There are a lot of swinging strikes below the zone there. There is a lot of contact over to the left of the zone with some called strikes sprinkled in. A lot of balls in the dirt.

So why didn't the Royals' lack of pitch recognition hurt them more against Lester? Of those 24 swings outside the zone (again, Baseball Savant's zone definition), only 6 were put in play, 4 of which went for a base hit. 9 of those swings were swinging strikes. Overall, there was a 62.5% contact rate with pitches outside the zone, which is lower than the Royals' season rate of 71.2%. Of the contact that was made, 60% of it was foul.

That was a fair amount of data thrown at you. Time for the insights.

1) Jon Lester, last night, was Jon Lester. Pretty much everything about his game was as it normally is.

2) The Royals, last night, were about as they normally are in terms of swing rate.

3) The Royals struggled to swing at strikes (BAD)

Sometimes, baseball smiles. The Royals' process for hitting was terrible, but it didn't matter. Perez's game winning hit was on a crappy pitch.