We have to do another night of this? I'm not sure my heart can take it.

Share All sharing options for: Royals Rumblings - News for October 2, 2014

This is fantastic piece by Jeff Sullivan at Fangraphs on how Jarrod Dyson was able to pick up a "tell" on Sean Doolittle to steal third base in the ninth inning on Tuesday night.

Doolittle looks back at Dyson, and then as he turns his head, he starts his motion, and Dyson is off to the races. No pause probably means no pickoff. No pickoff means a pitch, and a pitch means a pretty good shot at getting to third base, unless Norris makes a perfect throw. Norris’ throw was good, and he unleashed it quick, but because Dyson runs so well, and because he had such a good read on Doolittle, he was virtually unthrowoutable. This is why, to be a good base-stealer, you don’t need to be a great sprinter. So much of it is about what happens before the pitch is even on the way. And if you have great speed and great awareness, you’re a great base-runner, and Dyson’s one of the best.

The Royals trailed by four runs midway through the game on Tuesday. Their chances against Oakland ace Jon Lester were dwindling. A 162-game marathon had carried them to this point, and they pondered a philosophical change.

Joe Posnanski covers the Royals big win on Tuesday by really examining the Royals mantra of "I BELIEVE."

A few weeks ago, I was talking with one of the smartest baseball people I know, and though he was off on some of his views – he thought the Royals would finish seven games back in the division – he offered a view of chemistry that I like quite a bit.

His idea is that sports chemistry is not so much about how people on a team get along but how clearly those people believe that the team will be successful. The word there is "clearly."...

The point is – if you actually can get people to believe these steps will lead to victories, they will do those things with vigor. And, as Patton believed, a good army is an army in motion. The Royals’ players and management believed the team could run and bunt and slice and dice their way to enough runs. They believed that their bullpen was invincible and a late-inning lead was a guaranteed win. The Royals believed that they could win games even if Ned Yost did stuff that made the head hurt. It all became a part of their chemistry.

We can talk about pressure and mental toughness all we want, but good stuff is good stuff, and Yordano Venutra has some of the best stuff in baseball. There were plenty of reasons to think that his 100 mph heaters would work well against a hitter who admitted to struggling against high fastballs, and Finnegan's later performance makes it difficult to argue that this game was no place for an inexperienced youngster relying on pure stuff.

Cameron also breaks down all the Ned Yost bunts (SO MANY BUNTS!) and judges whether they were defensible or not.

Ned Yost bunted a lot last night, but it’s not at all clear that Ned Yost hurt the Royals chances of winning by frequently calling for sacrifice bunts with his worst hitters. The third inning bunt is criticism-worthy, I think, and the 9th inning bunt might have been too, depending on what you think of the odds of Dyson being able to steal second sucecssfully without it interfering with his ability to also steal third, but the extra inning bunts were just fine.

Drew Fairservice of Fangraphs looks at which stolen bases for the Royals on Tuesday made the biggest difference.

Rany Jazayerli has a piece up at Grantland on his experience watching the Royals win their first post-season game in 29 years.

Just before midnight, as September fell into October, I hugged my friends. I hugged complete strangers. I screamed until what was left of my voice was completely hoarse. I spontaneously invented a dance that would embarrass Elaine Benes. I had entered that state of joyous delirium that I’m told only sports can bring, but that I’d never experienced.

There is also a special appearance from a Royals Reviewer - we'll call him "Peanut Shell Guy."

A guy sitting in the row behind us, who’d driven in from Ohio for the game, announced that if the Royals came back to tie it he would eat the peanut shells that were under his seat. No one expected to take him up on his offer...

The game that was once over was now tied. I turned around to Peanut Shell Guy. "You have to honor your promise," I told him. He grinned the grin of a man given a reprieve from death row, kneeled down to pick two shells off the grime and the muck, and chowed down. 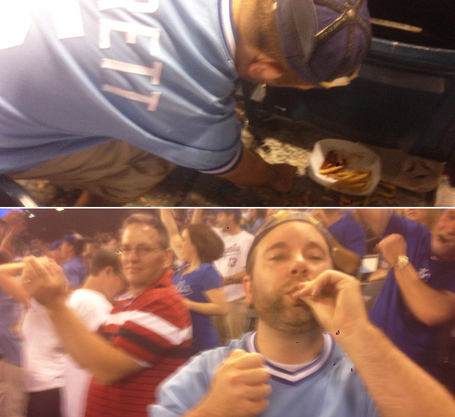 .@bfinny29 was pitching in the College World Series in JUNE. Come on. http://t.co/EWEYBbyiEB

Will Leitch at Sports on Earth writes about how the Royals have inspired some of the best known writers in the sabermetric revolution. (h/t Crooow)

Neyer led me to James, of course (and he was a Royals fan too), but also Rany Jazayerli of Baseball Prospectus (which led me to Joe Sheehan and Nate Silver and Christina Kahrl and Clay Davenport, none of whom were Royals fans but all of whom were brilliant) and my former colleague here at Sports On Earth, Joe Posnanski. These were all wonderful writers, but they were also wonderful writers about the Royals.

And the best part was that these devoted Royals fans and/or observers is that they were all so smart in a way that the team was so dumb.

No love for Lee Judge?

Sam Mellinger writes that Salvador Perez is the engine that revs the Royals.

"Everybody overlooked him at first," says Rene Francisco, the Royals’ director of international scouting. "Including us. We took a chance."

"We got lucky," says Dayton Moore, the general manager. "We can say what we want, but we got lucky there."

Danny Duffy, to the pen, at least initially for the ALDS.

Danny Duffy will be used as a long reliever, and could be a candidate to start Game 4.

BREAKING: The girl with the sign on TBS that said her boyfriend will buy her a puppy if the Royals won IS GETTING A PUPPY.

Ned Yost is a beloved figure in Kansas City, and Royals fans let him know on Twitter with messages of support following his pitching moves.

Vahe Gregorian writes it was the newcomers who came up huge for the Royals. 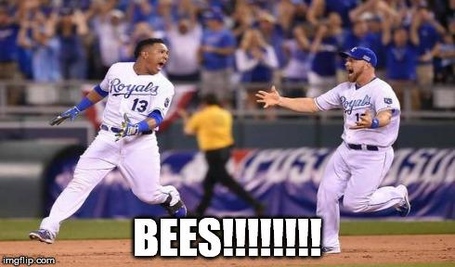 Ryan Sleeper (h/t to Kevin Glunt) worked up a pretty cool visualization of the 4,627 games the Royals played between playoff appearances over at Evolytics.

Craig Brown at Royals Authority with a description of his amazing Tuesday night.

Kings of Kauffman writers look back at their 2014 predictions before the year, and yep they all predicted Christian Colon would get the game-tying hit in the Wild Card game for the Royals.

And adorable old lady got lost and found herself in the San Francisco Giants dugout.

Which NFL jersey is the best-seller in your state?

The University of Kansas should just disband the football team and start a hockey program?

Dark lego artwork from artist Mike Doyle. "Everything is terrifying...everything's insane when you're over sixteen...."

Vox.com tells us all about the Ebola virus and how we can get on the bandwagon of the infectious disease everyon's talking about.

A reality TV producer discusses how to provoke totally unscripted and unforgettable moments in reality TV.

Your song of the day is Dada with "Dizz Knee Land"