We all agree that THIS is the playoffs, right?

The Angels won 98 games, more than any other American League team, but they come into this American League Division Series as perhaps one of the more underwhelming top seeds in recent history. They were 37-32 as late as mid-June, but finished very strong, winning 38 games in July and August before coasting to the Western Division title in September as Oakland folded.

Make no mistake though, the Angels are a very good team. Their run differential of +143 was easily the best in baseball. The Royals held their ground against them however, splitting the six games, including two of three at Kauffman Stadium including this thrilling 5-4 walk-off win on July 29.

The Angels led the American League in runs scored, scoring 4.77 runs per game, compared to the Royals 4.02 runs per game. They did this despite losing star slugger Josh Hamilton missing nearly half the season with injuries, and posting a sub-par season when healthy. The focus of the offense of course, is MVP-frontrunner Mike Trout. Trout is as good as they come, with few if any flaws to his game. He hits slightly better against right-handers, and slightly better at home, but he is a force to be reckoned with anywhere. Remember this?

Albert Pujols bounced back from a disappointing 2013 campaign with a slight improvement this year. Pujols was just 5-23 with one double against the Royals this year, although he has terrorized them in his career with a line of .333/.433/.605 in 72 games. The entire Angels lineup boasts hitters with an OPS+ of 100 or better. The club was fourth in the American League in on-base percentage, fourth in slugging percentage, and fourth in home runs. They are not particularly a threat on the bases, with just three players on the club stealing more than five bases this year. 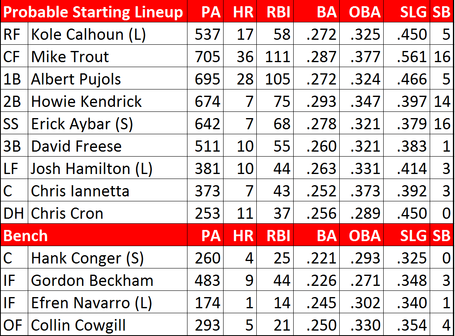 The Angels were dealt a huge blow when young pitcher Garrett Richards suffered a knee injury in August, knocking him out for the year. He joins left-hander Tyler Skaggs on the disabled list, leaving the Angels rotation thin enough that they will go with a three-man rotation for the series.

Matt Shoemaker has come out of nowhere to go from AAA organizational filler to 16-game winner. Shoemaker has added a changeup/splitter to his arsenal and with his sharp command, has turned into the ace of this staff. You can read Jeff Zimmerman's scouting report of Shoemaker here. Shoemaker lasted just five innings against the Royals on May 24, and the Royals roughed him up in Kansas City on June 27 for eight runs in four innings of work.

The Angels closer situation was in flux this season until they acquired veteran closer Huston Street from the Padres in July. Jason Grilli was also added to the roster mid-season from the Pirates. Shawnee Mission South grad Mike Morin had a nice rookie season the Angels and will join their bullpen in October. Left-handed specialist Joe Thatcher, added in July from the Padres, has struggled since recovering from an ankle injury and was not added to the ALDS roster, leaving swing-man Hector Santiago as the only left-hander in the Angels bullpen.

In a small way, I feel like we are already in the American League Championship Series. GO ROYALS!