How the Royals Can Beat the Angels

They won 98 games, but they are beatable.

Share All sharing options for: How the Royals Can Beat the Angels

Well...this article worked last time didn't it? It took some luck, some skill, and a little bit of razzle dazzle, but here we are: in the ALDS. That's better than not being in the ALDS and better by some size-able un-measurable margin.

James Shields kind of followed my strategy. He threw his changeup for about 20% of his pitches and his cutter for nearly 30%. The changeup was paced for his 2014 totals, but the cutter had a about a 6% higher usage while he threw just five curveballs and ramped up his four seam usage. Doesn't matter if he threw 100 ephus pitches, the Royals still won so now I get to write this article. I'll call that a success.

So now we get to see what the Royals can do to beat the Angels of Anaheim.

The Angels as an offensive non-pitching unit rank:

1st in fWAR (which includes hitting, fielding, and baserunning)

2nd in RBI (one behind Detroit)

So congrats Royals on winning the right to play that for at least three games. I don't think it's hard to find a strategy to beat that: pitch well. That's really easy and dumb to say. That's like telling a guy "hit a home run", saying to yourself "win the lottery", or telling your newborn baby "stop pooping" (cue Chris Traeger GIF).

You know I love breaking out the plate discipline figures so let's just go ahead and look at that:

Nothing particularly stands out here. They do swing at a good amount of outside pitches and don't make enough contact to perhaps validate that both outside the zone and overall. One thing perhaps of note is this:

They don't swing often at strikes yet teams aren't throwing them first strikes. The Royals are 11th in the league at throwing a first pitch for a strike while Royals starters rank 6th. The Angels aren't aggressive stepping into the box so this may be the time to try to get ahead early.

The Angels are also good at defense compared to the league this year. They rank 10th in the league in defense, but that might be slightly deceiving as they have been worth 0.9 runs above average (the Royals are at 47.9). The Angels core is basically the same as last year except they've lost Mark Trumbo. With defensive stats it's always nice to include multiple years of data and if you stretch out the time frame from 2013-2014 the Angels go from 0.9 runs to -25.3 good for 20th overall. While their club has been better this year (even with All-Universe Mike Trout having a down year defensively), I think it's safe to say that they are somewhere between an average to below average defensive unit.

They don't run the bases that well which isn't surprising given some of the Billy Butler grade speed players they have on their club. They rank 22nd in baseball in baserunning, 22nd in stolen bases, and 2nd in outs on base. Despite their seemingly poor baserunning, they are first this year in extra bases taken, first in bases taken, and they have been picked off just seven times this year. So they are an aggressive unit and with a couple of good speed runners like Mike Trout, Eric Aybar, and Howie Kendrick with some sneaky speed they can afford to be at times.

Another weak spot, much like Oakland had, is catch and defending the bases. The Angels rank 22nd in stolen base runs saved at -2 which is basically runs added/lost through throwing out runners and preventing them from attempting to steal bases.

LA is 28th in the league at RPP or "Passed Pitched Runs" thanks to the combination of Chris Ianetta and Hank Conger. Ianetta is 3rd to last in the MLB (min 800 innings) and Conger is 23rd (min 600 innings). Ianetta is average (0) at rSB while Conger is one of the league worst at -2.

Now on to the pitching side of the club. As an entire staff for 2014 the Angels rank:

Now there's a big caveat here: that's the entire 2014 season. Unfortunately you don't get bonus points for being good during the regular season but only really matter what you do going forward into the playoffs and the Angels staff is different...quite different.

The stats above include contributions from Matt Shoemaker, Tyler Skaggs and Garrett Richards. Richards was a four win pitcher before injuring his knee, Skaggs had a mid-3 FIP before Dr Andrews rang, and Shoemaker is coming off two weeks of missed time due to an oblique injury. Neither Skaggs nor Richards will be pitching in the series and as mentioned, Shoemaker is making his first start since September 15th.

Here's how the Angels staff looked in the first half of the season that includes a healthy Tyler Skaggs and Garrett Richards:

Now the second half which includes a few starts from Tyler Skaggs and Garrett Richards:

Looks like a little different of a team. They are down a full strikeout but have seen improvements in HR/9, LOB%, HR/FB, and ERA. They are getting a lot less groundballs, but those non-groundballs aren't going for home runs. Let's go a little deeper:

The fly balls are up but as mentioned a second ago they aren't becoming home runs and they are also giving up a few more line drives. This hasn't hurt them that much, but reducing strikeouts, giving up more line drives and fly balls isn't the recipe for getting better especially when those fewer ground balls aren't turning into infield fly's.

Tyler Skaggs was injured at the end of July. Garrett Richards was injured mid-august and Shoemaker missed the last half of September.

We see a decline in strikeouts every month and an increase in walks and HR/9. Meanwhile ERA and FIP both see increases.

A few more line drives allowed despite a pretty even BABIP while ground balls improved slightly but are still 5% behind the first half and a jump in home runs happens too.

These aren't gigantic differences, but you can see a change in the pitching staff sans Richards and Skaggs as one would expect.

I'm going to give you three players and you tell me who is who:

Let's look at it this way:

Doesn't that look like a good way to win the pitching match up? Or at least a start.

The Angels are primarily a right handed hitting team and they've hit well against both righties (107 wRC+) and lefties (121 wRC+).  As a majority right handed squad, they seem to be exploitable on the outer half and away side of the plate. Angels hitters are hitting .213 in zones 3-6-9-12-14 combined. 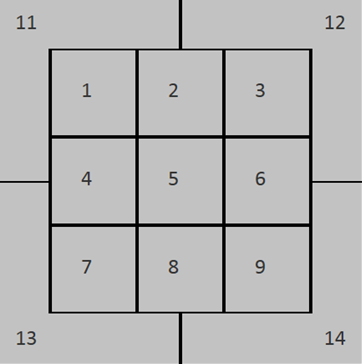 More specifically zones 9 and 14 they are hitting .183. While I'm unable to find their swing rate or relation to league average, I'm able to provide some detailed information on those two troublesome zones:

Now, from running those Pitch F/X inquires the data has shown that not many teams do that well in those zones, but the Angels do seem to struggle slightly in making contact in those zones and teams are pitching them there.

We can extend that a little closer to the plate and just look at zones 6 and 9 which cover the outer half of the theoretical portion of the strike zone.

There are still some vulnerabilities there on the away side of the plate for right handers.

The Angels hit the inner side of the plate for right handers well too (zones 1-4-7):

One of the better teams in the league at making contact on the inside portion (again for right handers) and turning contact into hits.

This is one of the best teams in baseball if not the best. They don't have a ton of holes and they do a lot of stuff average or better. This will be a tough matchup and having to play at least two games in Anaheim only makes it harder.

Angel Stadium is similar to Kauffman in home runs, but it poor for doubles and severely limits triples so we are looking at a pitchers park to be sure. That's something that maybe weighs in the Royals favor as they seem to have, at least on paper, the better pitching staff.

Run the bases - the Angels have a poor defensive catching staff and their outfield is 5th worse in the league when it comes to outfield arm runs above average. They don't keep teams from advancing extra bases or put them out on the basepaths when they do advance.

Another factor is that they have the 4th most wild pitches in baseball this year.

Defend the bases - As mentioned earlier the Angels are an aggressive unit on the paths but they aren't necessarily good at baserunning.

Throw first strikes - The Angels are somewhat lax when it comes to swinging inside the zone yet teams aren't pounding them for strikes early. When they do swing in 0-0 counts they are hitting .350 so the Royals will have to be careful here if first strike becomes a pattern.

Pitch them away - As a core right handed squad the angels don't cover the away side of the plate well. They have a high swing rate on outside pitches and don't do a very good job of making outside contact when they swing. The Royals could try to get ahead with a first strike then work them outside.

Settle down- The Angels are one of the worst hitting teams in high leverage situations with just an 88 wRC+. Meanwhile the Royals are 5th with a 106 wRC+.

So let's win this series you guys and send these Angels to hell!

Angels are bright still, though the brightest fell.
Though all things foul would wear the brows of grace,
Yet grace must still look so.