The Angels ace isn't the ace he once was.

Share All sharing options for: Royals Opponent Jered Weaver: Once Good, Now Not

Here's a picture of Jason Vargas and Jered Weaver together (with Cesar Ramos as a bonus). 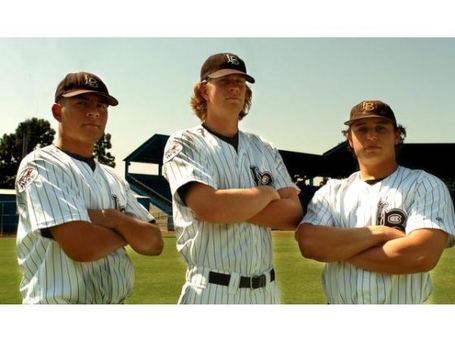 Two of those guys will be pitching in tonights matchup. Hint: it won't be Cesar Ramos.

We all know about Jason Vargas and I in fact wrote a piece about how's he's better than his last few weeks have been. Read that as your primer for Jason Vargas tonight. Now, continue to read this article for your primer on Jered Weaver.

As stated so blatantly in the title, Jered Weaver was once a good pitcher. From 2007 to 2011 Weaver ranks 9th in baseball by fWAR. He struck out nearly 8 batters per 9 innings while walking about 2 1/2 in just over 1000 innings including 3 straight seasons of 200+ IP.

Weaver made a living off of outperforming his peripheral stats for years.

He consistently outpaced his FIP by a full run sometimes. Using runs allowed instead of FIP as your base pitching metric, Weaver has been a very good pitcher even this year and last despite a decline in strikeout rate. That's where one of the worries has been for Weaver. Here are others.

The line drives are down and the strikeouts are up, but he's still allowing home runs and a tick up in walks. Also his velocity is real bad. He never crushed hitters with his fastball speed, but at 86 MPH we're looking at a 30 grade fastball speed there.

Not a lot of success there against Weaver historically but the Royals haven't faced Weaver since July of 2012 and have yet to face the new-ish bad Jered Weaver.

To end this article on a sadistic note, here's the visual representation of Jered Weaver's fastball velocity. NSFW. 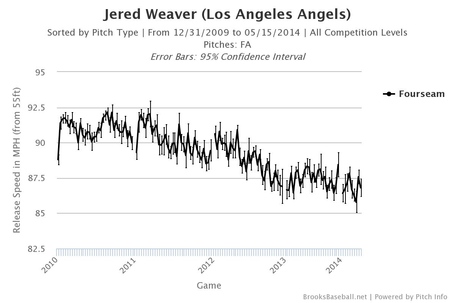