Is this guy the Angels' best starter now?

Share All sharing options for: The cordwainer: Matt Shoemaker

After the injuries to Garrett Richards and Tyler Skaggs, the Angels have had to cobble together a rotation from leather, cloth, rubber, and plastic. The shoemaker himself, Matt Shoemaker, has been the guy for the Angels since those other guys have been gone. He's experiencing something that might be called a good rookie season at the tender age of 28, which is still like 15 years older than Terrance Gore.

There are interesting things about right-hander Matt Shoemaker. For example, he was generally bad in the minors. You don't look at his minor league stats and think, "Yea, that's the guy I want starting Game 2 of the ALDS". To be fair, the Angels would have preferred their other guys' elbows not to break, but that's what happens to pitchers these days. Shoemaker spent almost all of 2013 in AAA and had a 4.64 ERA and 4.34 FIP. That doesn't scream "effective major league pitcher", does it?

Another interesting thing about him, which is explained in this article by Jeff Sullivan, could explain the first interesting thing about him. He profiles very similar to the Japanese pitchers because he throws a splitter. There are also some nice gifs in there, because Jeff Sullivan loves gifs. At any rate, let's figure out how Shoemaker attacks hitters. Here's a table showing his overall usage of his pitches in 2014. 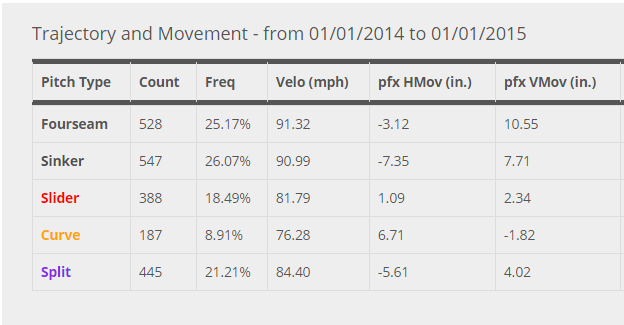 That's a pretty well-rounded repertoire. It's got hard stuff, breaking stuff, and off-speed stuff. However, he does show some relatively predictable tendencies both based on the count and the handedness of the hitter. 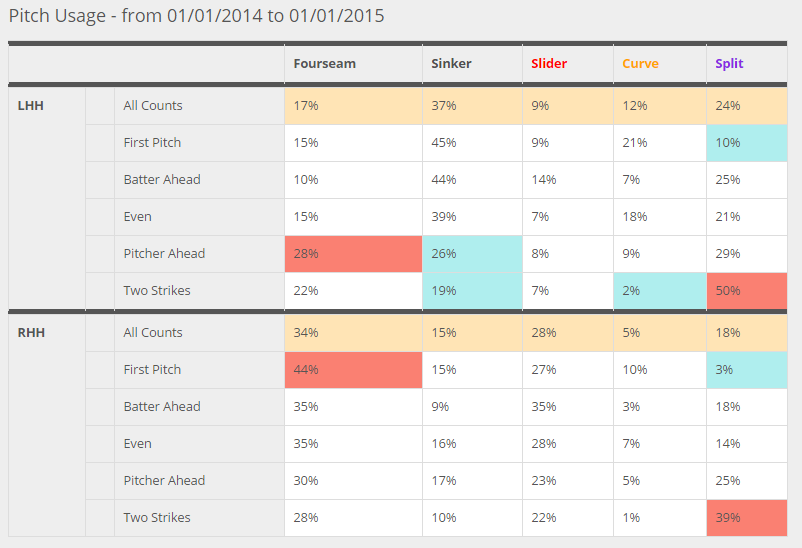 Shoemaker rarely uses the slider and prefers the sinker over the four seam fastball against lefties. It's the opposite against righties; Shoemaker prefers the four seam fastball over the sinker and uses the slider much more. Shoemaker seems to show little confidence in his curveball, which is perhaps explained by the .333/.500 BA/SLG hitters have against it (only 34 AB, though). He won't use it later in counts, preferring to surprise hitters on the first pitch with it relative to other counts. The splitter is his go-to strikeout pitch, especially against lefties. Shoemaker will table the splitter early in the count.

His splitter is a devastating weapon. Despite the fact that hitters have a pretty good idea that it's coming with two strikes, they can't do much with it. Hitters have a .166/.233 line against it with a silly 22% whiff rate. Shoemaker shows a pretty good ability to bury the pitch under the zone. You'll think it's a hittable fastball, and then it goes away. 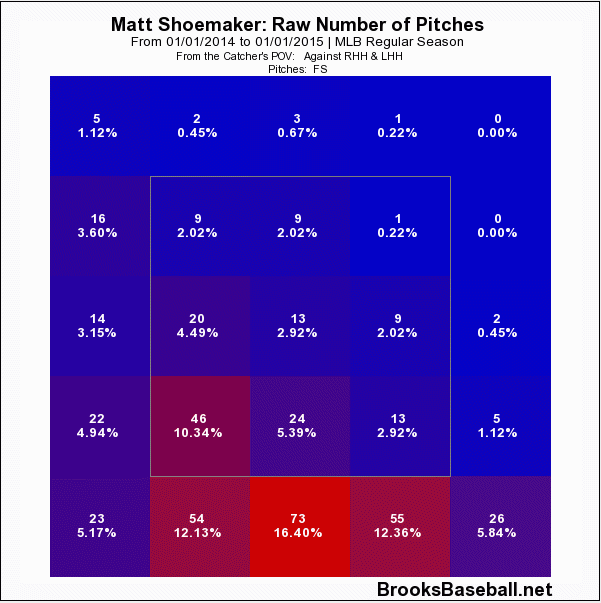 Given that Shoemaker's main weapon is an offspeed pitch, he can hold down lefties pretty well. Lefties have hit better against him than righties this year, but that's relative. All hitters have been below league average against him due to his excellent strikeout rate (22.8%) and walk rate (4.4%). Shoemaker shows command to both sides of the plate, as he works low and away to both lefties and righties. Given his off-speed pitch, I don't think there will be any platoon advantages to be taken advantage of on Shoemaker's side.

Like Jered Weaver, Shoemaker prefers fly balls more than ground balls but not quite to the same extent. He has a large home/road split this year, but who knows if that's a real thing or not at this point. Again, he's a rookie. Shoemaker's main advantage is avoiding contact; he has almost the same contact rate allowed (76.5%) as Stephen Strasburg. He's done a pretty good job of limiting line drives (19.7% LD rate). However, he allows somewhere close to league average production on all balls in play; his two fastballs are hittable pitches. The Royals' best chance may be to be aggressive early in the count. Shoemaker is like Lester in a way; he has a slightly above average first strike rate but an average zone rate. He'll try to get ahead in the count to get to his splitter, but he has to rely on not-so-great pitches to get there.

So, which will win out? Will Shoemaker's avoidance of contact trump the Royals' skill at contact? Vice versa? Shoemaker hasn't faced the Royals too much, but there have been two different outcomes.

The May game was in LA, and the June game was in KC. There are a ton of hits there; it seems like the Royals' aggressive strategy might pay off against Shoemaker. Don't let him get to his splitter. Lay off the slider. Profit.

There is one more wrench to throw in all this. Shoemaker is recovering from an injury that has kept him out for the past few weeks. That article calls it a mild left rib cage strain, but he's thrown full intensity pitches in preparation for Game 1. He may not have the stamina to go too deep into the game. Maybe one or more of his pitches won't have the right "feel", whatever that means for pitchers.

I don't know what Shoemaker feels, but I feel pretty good about the Royals' chances.