About Last Night: Jason Vargas and Living on the Edge

Vargas scrapped through 6 innings, but it could and maybe should have been worse...

Share All sharing options for: About Last Night: Jason Vargas and Living on the Edge

I've been pushing the narrative that the Jason Vargas we've seen the past few weeks isn't the Vargas of reality and likely neither was the Vargas at the start of the season. His true talent level probably falls in the middle of the two. Last night we saw an okay Vargas. Let me go a little deeper than that though.

Full credit to Vargas for grinding out an ugly outing. His final line on the night was 6IP 3H 2K 1BB and 2 home runs allowed. From an FIP standpoint Vargas wasn't pretty with a 7.30 FIP but that's thanks to the two home runs mostly. Speaking of, let's take a look at them.

Vargas is a flyball pitcher. He's not an extreme fly ball guy, such as his opponent Jered Weaver last night is, but Vargas for his career has allowed an above average rate of flyballs. It's not something that has hurt him over his career as his FIP and xFIP aren't separated extremely and Vargas has about an average or so home run rate. Vargas also doesn't live up in the zone and that also helps keep the flyballs in the park. One perhaps underrated factor is that Vargas has had the fortune of pitching in Seattle, Anaheim, and Kansas City (all parks that deflate home runs) for the majority of his career.

Now, any pitcher can have a random bad luck home run game and maybe that was all it was for Vargas last night, but thanks to the internet we can get an idea of what he was perhaps doing, if anything, that caused those home runs. Other than the batter swinging the bat and making contact that is because that's ultimately the reason home runs happen. 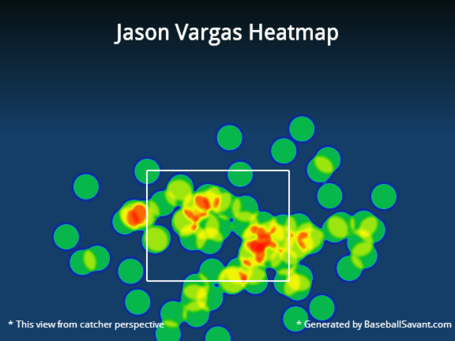 That's Vargas' pitch heatmap last night (courtesy of Baseball Savant) and you can see by the touch of red Vargas was leaving some pitches up in the zone and really over the plate (especially to left handed batters).

There's your home run to Chris Ianetta. An 81 MPH changeup, up and dead center over the plate. That's a pitch hitters should, and generally do, hit very far.

And there's your David Freese home run. Fastball at 89 MPH just about a half foot or so to the left of the Ianetta home run, but still at nearly the same vertical height.

Here's all the flyballs against Vargas last night: 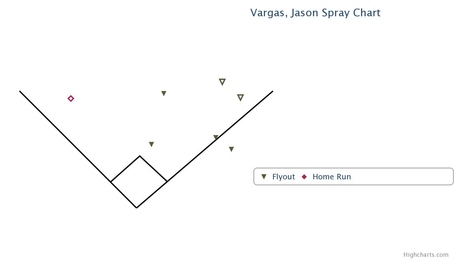 Note that Pitch F/X classifies the Freese home run as a line drive.

If the two right field deep balls were hit to left field they would have been home runs. Howie Kendrick's (the right one) was hit 299 feet while Kole Calhoun's (the left one) was hit 307 feet. The Ianetta home run was just 272 feet. The Freese line drive was the second longest hit ball for the Angels last night, falling just a foot shorter than Calhoun's long flyout. 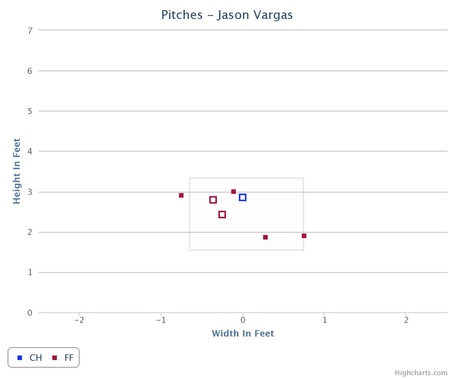 There is also the pitch locations for the above referenced flyballs.  The farthest right and bottom pitch was against Freese which coincides with the farthest right flyball on the above chart that's in foul territory. The bottom left pitch is the Pujols flyout to center. 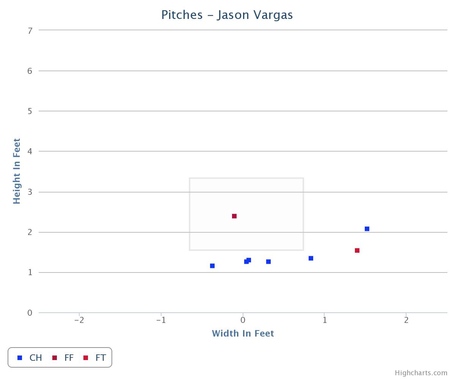 He generated just one swinging strike in the zone. The Angels batters weren't getting fooled by his stuff and as mentioned earlier his final box score line of the night showed just 2 strikeouts over 6 innings.

Vargas got a bit lucky last night leaving 89 MPH fastballs up in the zone to a very good hitting team. He was still tagged for two home runs but there could have been more and there really should have been more or at least more damage.