Why this postseason run is fundamentally altering what it means to be a Royals fan, and how we can retain the soul of the fandom.

Share All sharing options for: A sudden identity crisis

It's such a simple statement, but it says a lot about you.  For most of 29 years, it meant you stuck with something that was awful.  It meant that you were a true fan, or maybe a little masochistic.  Possibly both.  But it was such a distinctive statement that you couldn't escape the comments.  "Oh, you're a Royals fan? Wow." "You must love baseball." Or, my favorite, "Why?"

Fandom is a fascinating and complicated thing, but a lot of it has to do with identity and community. Becoming a fan of a sports team automatically grants access to a group of like-minded individuals with similar passions and interests. Of course, winning is better than losing, but anybody who's been to an intense Royals game at Kauffman Stadium can attest to the unique shared experience that cannot be replicated alone watching the TV regardless of the outcome.

Being a Royals fan gave you instant, undeniable credibility, and the community of Royals fans was hardened, smart, and incredibly distinctive.  Being a Royals fan brought a unique experience that could not be replicated anywhere else.

Now, the Royals are in the American League Championship Series.  They've locked down a playoff spot, won an insane Wild Card game at home, swept the team with the best record in baseball in the Divisional Series, and come to the attention of the national spotlight in a two-week span.  Even if this is a temporary high and the Royals are mediocre next year, the fandom will have fundamentally shifted. In leaving the cave of dismal, horrible baseball towards the light of relevance and success, we are moving from a place of familiarity to a new world that we must come to terms with.

For years, fans of the Kansas City Royals were defined by the team's utter inability to accomplish anything approaching respectable baseball.  Sure, other teams feel a similar sort of pain, chief among them our National League brothers-in-arms the Pittsburgh Pirates.  But the Kansas City Royals were a special brand of incompetence and worthlessness.  From 1986 to 1994 the Royals were constantly disappointing, but not quite awful.  They continuously mixed in winning seasons and losing seasons in that time period and were on track to end a nine-year playoff drought in 1994.  Then the strike hit, the season was cut short, and everything went to hell.

But this Royals season has altered what it means to be a Royals fan. Finally, the Royals are winning.

There were a billion individual grievances in that time period.  Picking a random year out of a hat yields terror after terror.  2007?  The Royals had three significant starters who started a combined 60 games, all three of whom finished with ERAs of over 5.50.  They had 16 positional players accumulate 25+ games played; only three hit at least league average and none were more than 8% above league average.  During the time spent in the valley of the shadow of suck, the Royals drafted a plethora of busted top-10 picks such as Jeff Granger, Dan Reichert, Jeff Austin, Mike Stodolka, Colt Griffin, and Christopher Lubanski.

Losing so deeply permeated the culture that it seeped into our perspectives on baseball.  Royals fans are often critical, cynical, dismissive, quick to joke, and not likely to believe, think positively, or be particularly earnest.  Losing became a hallmark of being a Royals fan, so much so that it has become part of our identity.  It's hard to break from habit as, for many of us, losing is all we've ever known.

There is no guarantee that the Royals are completely out of the cave.  Maybe the Royals begin another playoff drought next year.  Maybe they win four consecutive World Series.  I don't know, and it's useless to try and peer into the future at the moment.

A look back at the crazy Royals 2014 season 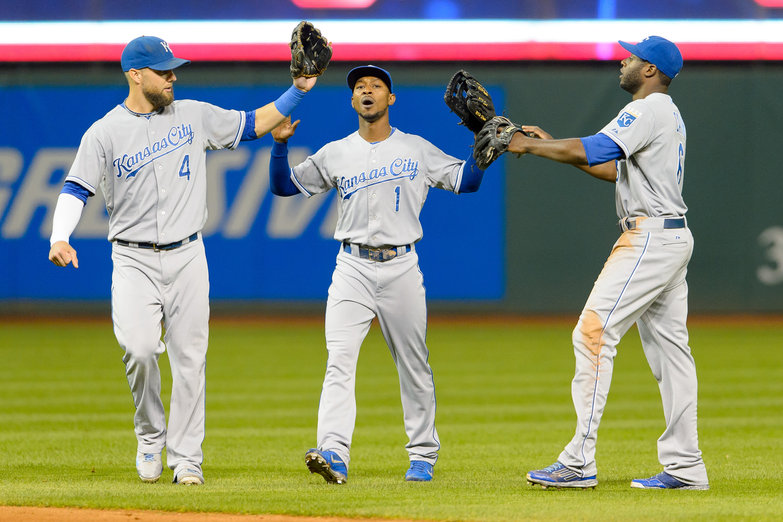 But this Royals season has altered what it means to be a Royals fan.  Finally, the Royals are winning.  They are respected, feared, even, by the rest of the league.  They are four games away from a chance to compete for a world championship.  Things have changed--permanently.

No longer are the Royals the poor little team from Kansas Missouri who haven't been relevant in a generation.  They are a Royals team that has accomplished more than every other team in the American League but one.  ALDS appearances by unlikely, surprise teams happen reasonably often.  For one of these teams to dominate so thoroughly in a series against their ALDS opponent?  Much, much less often.  These Royals have proved they belong.

For them, it's easier, in a way.  They've all played high-stakes games before.  For us, though, it feels different.  This is the Apollo 11 astronauts looking at the Earth.  It's beautiful beyond description, but it is foreign and strange as well.

So how do we deal with this?  Short answer:  I don't know.

No, really.  Just last year we learned to root for a team who won more than they lost.  This year a whole generation of fans learned what playoff baseball is like (spoilers: it's amazing).  I'm unprepared to deal with the fallout of the Royals being a legitimate baseball team.

The long answer?  We need to preserve the soul of Royals fandom at all costs.

We can start by welcoming the bandwagon fans.  They are extremely important to any fanbase and, really, are the most sane of all of us.  A winning product is an attractive product, one worth rooting for, much moreso than a team who would willingly employ Kyle Davies for five seasons.

We can continue by being ourselves through the thick and thin.  We can't let winning change who we are--and that is being smart, witty, and passionate.  Too many times, fanbases change through winning, and the Royals are already a great fanbase.  Arrogance can't be part of the equation.

Finally, and most importantly of all, we can't claim that we are better than anyone else.  We can't claim that Royals fans are the best, or the brightest, or anything.  We shouldn't, even if it's true, especially if it's not.  Each city goes through radically different trials, and there is no objective way of judging which city is the most, well, anything.  The key is being great.  Being supportive, being loud, rooting for the team no matter what.  We don't need to call ourselves 'the best thing in the history in whatever' or attempt to take the 'Best Fans in Baseball' crown away from whomever holds it right now (I have heard once that it might be St. Louis).  Let our excitement, happiness, and determination stand for itself.

Above all, we need to Be Royal, for there are Big League Moments happening; this is Our Time and we should Come to Play.  You Belong at the K, and You Gotta Love These Guys.