Since it was implemented for the first time this year, no one actually understands how replay review works, so let’s start with a crash course on the rules.

In theory, managers only get one or two challenges per game. In practice, managers have infinite challenges, because most umpires will invariably review a play if a manager asks them nicely.

A lot of fans thought that manager challenges were only available until the end of the 6th inning, due to the confusing nature of the "crew chief review." That’s not actually true- as long as they still have a challenge in their pocket, managers can challenge any reviewable play in any inning.

If you want to read more about the replay review rules, including gripping details about how television broadcasts should cut in and out of commercials, then you can find the full regulations here.

But enough about the rules. How did the Royals fare in the first season of replay?

They did great! Only five teams had a greater success rate on their challenges- the Yankees, Braves, Nationals, Brewers, and Marlins. The Royals also challenged more often than any of those teams. It’s pretty clear that the Royals are one of the best teams in the league at replay reviews, which is a good thing to have in your back pocket at the end of the game. And as it turns out, the Royals are also good at making sure they have a challenge in their back pocket at the end of the game.

Baseball Reference has information on each manager’s review records- here’s Ned Yost’s, for example- and included is the game situation for each challenged play.

If we add the leverage index into the equation, we can find out how effective managers are at deploying their challenges.

This is a good sign. It shows that Yost and the Royals, while willing to challenge small plays in the right situations, prefer to hold onto their challenges for when they really matter. It would have been easy to see Yost using challenges whenever possible last year, especially since they were a shiny new toy to play with. But he didn’t, and put full trust into the Royals’ top-flight replay team. Good for him.

Even better, the Royals made the right call on almost 80% of those low-leverage challenges. They were a full 25 percentage points better than the average MLB team in these situations.

The Royals only failed three times when they challenged low-leverage plays. Let’s take a look:

It made a lot of sense for the Royals to challenge this play. Conger’s hand clearly came off the base, and Escobar got the tag onto him quickly. If the play gets reversed, the Angels have two outs and no one on base, as opposed to one out and a runner in scoring position.

Ultimately, the call didn’t matter, since Shields was able to get out of the inning anyway. But the game went to extras, an eventual 7-4 win for KC in 13 innings. If Conger had gotten around to score, the Royals wouldn’t have forced extra innings, and they wouldn’t have gotten the win.

In hindsight, it’s pretty clear Conger was safe, but it was worth a challenge anyway.

July 29, Royals down 2-0 in the 6th, Eduardo Nunez confirmed safe at second:

Another close play at second base, and in real time it did look like Escobar got the tag on Nunez, but replays clearly showed Nunez got to the bag first. This play also didn’t matter in the grand scheme of the game, since Shields would eventually strike out the other, lesser Escobar that plays for the Twins. But depending on the camera angles the Royals had, it was probably worth a challenge.

August 23, Royals up 4-1 in the 6th, Elvis Andrus confirmed safe at second:

This one’s questionable. Andrus was pretty clearly safe on the play. The Royals were also one strike away from getting out of the inning, and already up by three runs. While getting the third out immediately was obviously ideal, holding on to the challenge would probably have been the better idea, since it was unlikely the play would be overturned and Rios (yes, that Rios) would eventually fly out to end the inning.

Notice the common thread in all three plays: they all took place in the sixth inning. Losing your challenge in the sixth inning is not a big deal, since you can always just ask for a crew chief review beginning in the seventh. (And as we’ve already discussed, the crew chief isn’t likely to deny that request). If you’re going to challenge an iffy play, that’s the time to do it.

In high-leverage situations, the Royals’ success rate on challenges was around league average. I won’t go through every single challenge they missed, because there’s ten of them and in a lot of cases, you just have to challenge in case everyone missed something to have a hope of winning the game. Therefore, don’t read too much into the Royals’ league-average record in high-leverage challenges. The low-leverage situations give you a much better idea of how good the Royals are at challenging plays.

At some point, we’ll have advanced stats measuring WAR for managers based on their challenge decisions. They aren’t here yet, but they’re coming. As for right now, there isn’t much of a correlation between a team’s win-loss record and a team’s challenge record. 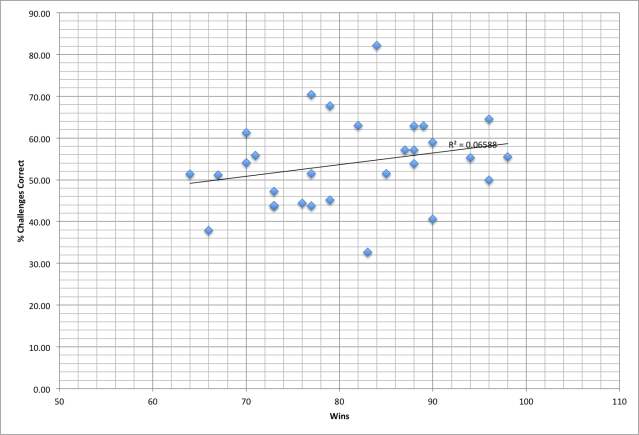 (You learned nothing from that chart, but thanks for looking at it! See if you can spot the Royals' diamond.)

Case in point: the AL East. The Yankees were hands-down the best team at challenging plays. They got over 80% of their challenges right. Nobody else was close. Toronto, on the other hand, was laughably bad at using challenges. John Gibbons challenged more low-leverage plays than any team not named the Cubs (who, despite challenging everything, did so with at least a semblance of competence.) The difference? When Toronto challenged low-leverage plays, they were successful just 23% of the time. Gibbons wasn’t just challenging plays that didn’t matter- he was also wrong nearly every time.

The Yankees were a full 50 percentage points ahead of Toronto in terms of their challenge success rate… and finished a similarly impressive one game ahead of the Blue Jays in the standings.

Don’t take this to mean that challenge records don’t matter. Whether a baseball team is good or bad at baseball has no bearing on whether they’re good or bad at challenging plays, and vice versa. But being good at challenges can steal your team some wins. By Pythagorean win-loss records, the Blue Jays should have finished eight games above the Yankees this year. Do challenges account for the entire nine game discrepancy? No. But over the course of an entire season, it’s not unreasonable to believe that having a good review team is worth a win or two.

One more thing: Ned Yost gets most of the credit for making good challenges, but that credit should go to Bill Duplissea, whom the Royals put in charge of replays this year. Yost gave Duplissea his due in this article from the USA Today prior to the postseason, and the Royals’ broadcast teams have mentioned him in their broadcasts numerous times. Building a strong replay review team is going to be essential in a few years, once the problems with the system get ironed out. Fortunately, the Royals are already ahead of the game.