Mellinger on the Royals "Gamble"

The Star's Sam Mellinger clarifies the Royals financial situation, yet still calls on the Glass family to do more.

Share All sharing options for: Mellinger on the Royals "Gamble"

In case you missed it because you were staring into your partner's eyes in romantic bliss last Friday, Sam Mellinger wrote a column responding to the Royals quotes on this year's payroll being a "gamble." While finding out about MLB team finances is still harder than getting into Fort Knox, Mellinger did at least call around to people that might know more than him to question the Royals company line - that they are breaking-even with this "gamble" on a $90 million payroll.

The first thing to talk about here is the new national television contracts that kick in this season. You hear a lot about this $25 million figure. That’s the number being thrown around locally and nationally — we’ve used it here — as the per-team increase from last year to this year. But some phone calls around baseball show the number to be misleading.

Most relevantly, there is no $25 million-per-team jump in revenues from 2013 to 2014. That figure (which doesn’t account for a share that MLB takes) comes from the average of the new contract compared to the average of the old contract. But the old deal increased every year, just like the new deal is scheduled to. The highest total of the old contract was last year, and the lowest total of the new contract is this year, so the raw increase from last year to this year is thought to be more like $5 million to $10 million, before MLB takes its share.

That makes perfect sense. We know that contracts tend to escalate in value over time. We should also expect that the MLB Central Office is going to skim some money off the top (Bud's haircuts don't pay for themselves!) So revenues aren't taking a massive jump this year, they are increasing incrementally.

Depending on where a few remaining free agents land — yes, including Ervin Santana — the Royals should rank around 16th in payroll while playing in the sport’s third-smallest market, with revenues that rank in the bottom four.

According to Baseball Prospectus, the teams that have more money committed to payroll right now than us are Arizona, Atlanta, Baltimore (they passed us when they signed Ubaldo, which happened after Mellinger's column), Boston, Cincinnati (the smallest market in baseball), Detroit, L.A. Dodgers, L.A. Angels, Milwaukee, N.Y. Yankees, Philadelphia, San Francisco, St. Louis, Texas, Toronto, and Washington.* So that checks out.

*-Technically, the Cubs have more committed in contracts, but we will pass them when all reserve players are signed.

At the end of Mellinger's piece he lists a chart that lists player expenses, revenues and operating income, sourced from Forbes Magazine. I find some of the numbers difficult to believe.

For example, in 2010, player expenses are listed as $94 million. According to the Kansas City Star, the projected Opening Day payroll was about $70 million. Sure, they could have added payroll through trades, and incentives and bonuses and such, but $24 million worth of incentives? And that summer the team dumped the contracts of Kyle Fansworth, Rick Ankiel, and Jose Guillen (although they likely ate most of Guillen's contract) without taking on any substantial contracts in return.

Take 2011 - the Royals went young and projected a $36 million payroll on Opening Day. Forbes says it ended at $90 million. The Royals made no significant trades that summer. The AP reported their final player expenses to be $44 million. Okay, maybe there are pension obligations that make up that difference. And they did splurge on international amateur spending. But $46 million's worth? 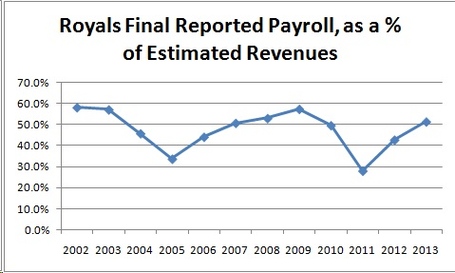 Final Payroll Numbers are from the Associated Press (most found here or through Google Search). Forbes revenue estimates are found here.

The Royals are also probably receiving about $30-40 million in revenue sharing money, if not more, according to leaked documents to Deadspin, although that number should be reflected in Forbes' revenue estimates.

The projected payroll for 2014 is right around $90 million, not much higher than where they ended up last year. Revenues also certainly went up, although not by $25 million as we earlier suspected. But the Royals payroll as a percentage of revenues should be right in line with what they were spending last year, which was in line or lower than what the Royals have spent in the past. According to this chart, 2014 isn't any more of a gamble than 2002, when they spent their money on lucrative players like Roberto Hernandez and Jeff Suppan.

Now, if there was ever a time for Glass to lose a relatively small amount in the name of winning baseball games, this is it. Moore calling the $90 million payroll "a gamble" is a bit like a millionaire "gambling" on the penny slots. The Royals’ financial situation is strong, and any one-year loss would be more than offset by past profits and rising franchise value.

Glass may very well lose money this year, but an owner more focused on taking advantage of this opportunity and less on a potential one-year loss would be willing to extend further beyond break-even. Then again, an owner solely focused on profit would keep the payroll below that break-even point.

Glass is operating, in other words, like a C student.

What has hurt this franchise the most seems to be the absence of any kind of long-term strategy other than David Glass' ill-fated attempts to change baseball inequity problems by showing how crappy he could make his franchise. The Royals finally seem to have a youth movement that works, with some momentum going to the future. To call this year's payroll a "gamble" suggests the rug could be pulled out from under us at any time.

There seems to be little indication this payroll is a gamble. The organization drastically cut payroll in an attempt to go young a few years ago, and reaped the financial windfalls. 2014 appears to be just an average year in terms of player payroll as a percentage of revenues. While I welcome the increased player payroll to reflect the rising revenues, David Glass previously stated he was open to taking a loss if the team was close to contending, and I don't think we've seen him come through on that promise.

Glass recently did an interview where he suggested the team is as financially strong as it has ever been. Well that's great, but you don't fly flags out in left field based on financial soundness. You do it for winning games. Later in the piece he suggests he is open to the possibility he could sell to another ownership group. For the good of the franchise, it might be time to do just that.