Who is the Face of the Kansas City Royals?

Its a face only a mother can love.

Share All sharing options for: Who is the Face of the Kansas City Royals?

The Royals representative is Alex Gordon. Lana Berry concludes he is at least one of the most attractive faces of the game. But is he TRULY the face of the Royals? Let's take a look at the candidates.

Gordon is the player featured in this creative billboard near downtown Kansas City that has generated a lot of national publicity. He's a three-time Gold Glove winner, and made his first All-Star team last year. His 18 rWAR over the past three years combined are not only the tops for the team, but the seventh most among all positions players in baseball over that time. He is a Midwestern kid from nearby Nebraska who grew up a Royals fan and has been hyped as the future face of the franchise since the Royals made him the #2 overall pick.

Still...he doesn't feel like a superstar. He hit .265 last year, perhaps too low for old school fans who believe in batting averages and phrenology. His All-Star appearance last year is the only one in his career. He's not a particularly engaging interview or bubbly personality. And those calves! Geez bro, do you even lift?

Billy leads the team in Offensive WAR over the last five years, smacking a team high 99 home runs over that time. He was an All-Star in 2012, when we hosted the event, and should have been a representative in the Home Run Derby. He has won a Silver Slugger Award and is generally considered the second best designated hitter in the game after David Ortiz. He has the fourth highest OPS+ in franchise history and is already seventh all-time in hits. He sells a popular barbecue sauce and has a fun nickname in "Country Breakfast."

Still...he's a designated hitter. His face is not even on the field half the time. Trade rumors swirled around him this winter. He's not really a big bopper. Facebook fans complain about his lack of clutch hitting. Could Kansas City love that chubby face?

Big Game James is the first true ace we've had since Zack Greinke was ordering guac at local Chipotles. The Royals traded a potential face of the franchise prospect in Wil Myers to acquire Shields. He didn't disappoint either, leading the league in innings pitched, and finishing 8th in ERA, while picking up Cy Young votes. He'll be our Opening Day starter, and this October, would start Game One of any playoff series we participate in. Shields has exhibited more personality than some of our other wall-flowers and seems to be a leader in the clubhouse

Still....he's a pitcher. He's only out there once every five days. He's only been with the team a year, and is a free agent this winter, so his stay here could be brief, especially if he's asking for Zack Greinke money. Plus, he's more of the butt of the franchise than the face.

Hosmer is the young stud with more upside than veterans like Butler and Gordon. The former first round pick has shown flashes of brilliance and enjoyed his first .300 season this year. He also won his first Gold Glove and has exhibited smooth fielding. Hosmer is just 24 years old with a photogenic face and the confident attitude to be the face of the franchise.

Still...he hasn't really done much yet. He has yet to have a 20 home run season. Last year was his first .800+ OPS season. The metrics say his defense is overrated. He had just one home run over the first 61 games of last year. He could turn into Casey Kotchman just as easily as he could turn into the next big superstar. Plus, fans have lofty expectations of him to fill the big shoes of Ross Gload.

He's the man who has steered this ship from 100-loss seasons to its first winning season in a decade. He has given Royals fans playoff expectations for the first time since Bill Clinton's first term in the White House. He is the captain of this ship, the engineer of "The Process."

Still....in seven full seasons, the team has had a losing record in six of them. The only starting pitchers he has developed in seven years are Danny Duffy and Yordano Ventura. He's not a player, its hard for the face of the franchise to be a Dockers-wearing executive. Plus it looks like he's losing his hair. The comb-over isn't fooling anyone Dayton.

There is only one correct answer of course. He is our constant, our alpha and omega, the theme that runs through this franchise. Its the face only a mother could love. 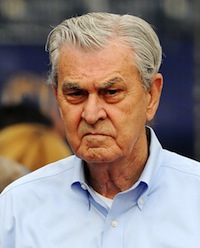