This staff is old.

I am going to take a quick look at the Royals starting pitchers' injury risks for the 2014 season. I will list out the various injury factors and then give my overall assessment.

Age: People get more injury prone the older they get.

IP: If a pitcher has shown the ability to throw a full season previously, they are more likely to be able to hold up for a full season again.

Fastball Velocity: As a pitcher gets hurt, his velocity declines.

DL chances: Using past innings pitched, age and previous DL stints, the chance a starting pitcher will end up on the DL can be determined (min 120 IP in the previous season).

Overall Mechanics: For this value, I took the grade from Paul Sporer's 2014 Starting Pitching Guide and sometimes I added a quote from the guide.

Three year trends: Late game consistency measures a pitcher's ability to keep up their production late in a game. When they have a high value, they experienced a huge change in the following: release point, break and/or velocity. These changes have been known to be signs of a possible injury.

"Shields has the reverse twist into max leg lift, but unlike some other players who employ that strategy, he is able to keep himself moving toward the plate while he initiates the coil. The twist was not as pronounced in 2013 as it had been in '12, and the reduction may have been part of a targeted attempt to become more balanced. "

DL stints over the past 3 seasons: None

Conclusion - Shields has been extremely healthy in the past while throwing a ton of innings. Additionally, he is mechanically sound and has been able to maintain his fastball velocity. His LGC score was quite high at times, but the cause for the values is a differing release point caused by him moving around on the rubber. Improved mechanics has led to an improved score in 2013. Additionally, his Zone% is a bit on the low side. Overall, he should make it through 2014 without a disable list stint.

Conclusion. Recently, Vargas has been a fairly healthy pitcher as seen by his ability to throw over 200 IP in 2011 and 2012. Late June last year, he experienced a blood clot in his throwing shoulder. Just before and after returning from the DL, he experienced a velocity loss, lower Zone% and small jump in his late game consistency. He should heal and be back to form for the 2014 season.

The key to look for at the beginning of the 2014 season is his velocity. It would be nice if it was near 88 mph instead of under 87 mph. Overall, he should be a reliable pitcher if he proves he is over the blood clot.

"Guthrie has held his velocity remarkably well, with an average fastball in the 93-mph range every year from 2009-2013, but his method for generating that velocity is inefficient."

DL stints over the past 3 seasons:
2012: Shoulder Sprain.

Conclusion: Guthrie as generally been healthy over the past few seasons. He does have a couple more factors working against him compared to Shields and Vargas. First, he going to be 35-years-old. He can't pitch healthy forever. Also, he had some shoulder issues in 2012. Looking over his charts, he did seem to have some issues in the first half of 2013 with his velocity and Zone% down and his LGC up. Here are his 2013 splits from the two halves:

I bet some injury was bothering him in the season's first half. Overall, I would not be surprised to see Guthrie spend some time on the DL this season. Besides, age and past injuries catching up with him, he may end up on the DL for suckiness dead arm.

Chen is an odd duck, with variations to his arm slot that cause huge swings to the grades on his report card. ... Chen shows no pattern with respect to pitch types and arm angle, and the disparity among his various deliveries leaves him with a sub-par grade for mechanical consistency.

DL stints over the past 3 seasons:
2011: Strained lat. Muscle

Overall, I am amazed Chen is still out there giving it his all. He has been able to stay relatively healthy over the past few season compared to earlier on in his career. One item which can be ignored with Chen is his LGC score. Since he throws from so many release points, the formula picks him up as injured. Here is an image showing his 2013 release points: 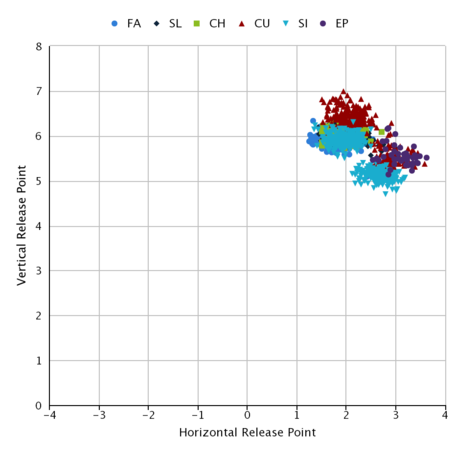 I don't know how much magic Chen still has. It wouldn't surprise me if he out produces Vargas and/or Guthrie if he remians healthy for the entire season. I am just not sure if the 37-year-old lefty has another full season in him as a starter.

DL stints over the past 3 seasons:
2012: Strained forearm.

Conclusion: It is tough to tell if Davis can pitch an entire season as a starter. Basically, he isn't a starter and he is going to keep getting moved back to the bullpen where he thrives (increases his fastball velocity by 4 mph).

I'm certainly interested in the profile, but he simply needs more reps because we just don't have much to go off of right now.

Conclusion: Duffy needs to prove he is over his 2011 Tommy John surgery. Historically, pitchers are back to normal production at his point in the recovery process. It will be interesting to see how he holds up over a season. I do expect the Royals to limit his innings to around 160 to 180. His injury risk should be re-examined after five starts.

The torque is huge at peak, but inconsistent timing with his trigger of rotation opens up the vault of volatility.

DL stints over the past 3 seasons: None

Conclusion: I am worried about Ventura being able to hold up as a starter. While some people may point to his small stature (5'11", 180 lbs), I am worried about his arm being able to continually throw over 100 mph. While I have not been able to prove or disprove hard throwers are more injury prone, the small sample of hard throwing starters do seem to end up on the DL regularly (see Matt Harvey and Stephen Strasburg).

In his three 2013 starts, he has a high late game consistency score. I went back and looked at why. The reseason stems from a horizontal release point varying by a foot and a half while his vertical release point was constant. 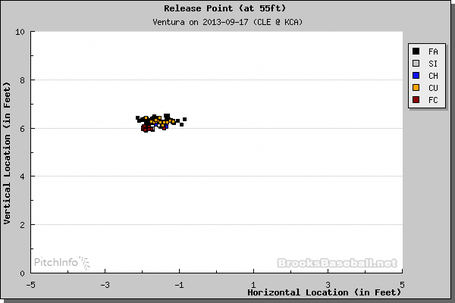 I went back to his first game and see what was going on. His plant foot location varied quite a bit (and he has a big boooty). 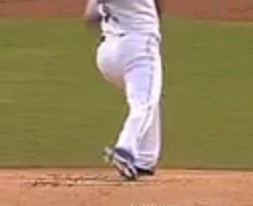 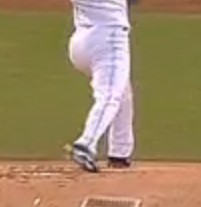 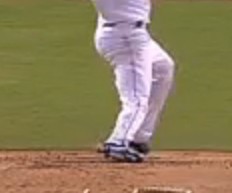 If there was one pitcher I could see just breaking, it would be Ventura. He is still young and hopefully he can put together a smoother delivery.

Zimmer has an outstanding delivery in every dimension, but his motion is also quite vulnerable.

DL stints over past 3 seasons: None

Conclusion: Zimmer has already dealt with shoulder tightness costing him a few games at the end of the 2013 season. A full healthy season would go a long way in calming any fears of future injuries.