Share All sharing options for: Letting Santana sit out ...

Would you rather be repeatedly punched in the left eye or the right? 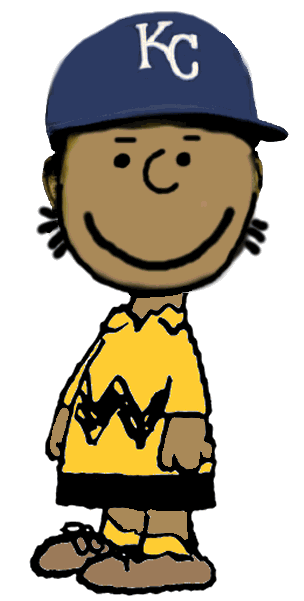 Fast forward to June 8th when teams will be lining up to hand Ervin Santana a multiyear deal worth at least $50 million ...

If you know who that lady is, please let me know. Eh, maybe not ...

Anyway, as I'm sure you have all heard by now, Santana said he'd rather sit out until June than take a Nelson Cruz-type deal. Fair enough. He is kind of getting jobbed by the rules, but does he really think the only thing preventing him from getting the deal he wants?

Erv had a great 2013, but he also had a 2012 that would make you want to vomit in your shirt pocket. He made some adjustments in KC, and it paid off. He mixed his pitches more effectively and maintained a solid K-rate despite throwing his sinker more than he ever has -- which led to a career high groundball rate.

But, he also has a career ERA chart that looks like ... 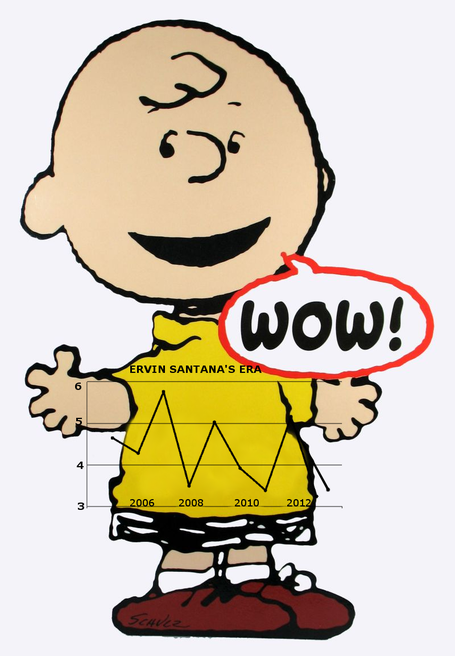 In other words, he's had a volatile career. Everyone knows that, which is exactly why teams are probably hesitant to offer him a long-term deal worth front-of-the-rotation money. Four years and $50 million isn't as much as it used to be, but it's still a pretty sturdy commitment. In a few years, Royals fans might just as easily look back on this situation with a sigh of relief if it plays out the way it looks like it will.

However, if we assume that Ervin actually does sit out until June, the Royals are left with two choices in what looks sort of like a lose-lose situation -- at least for them.

They stand to "spend" more money either way.

Brett Hayes will see little time behind the plate, but he could be valuable as the forgotten utility player.

In Scenario One, they man up and re-sign Santana. It doesn't matter what the deal looks like, but if they wait until after April 1st, they will supposedly be unable to extend another qualifying offer to him if they ended up agreeing to a one-year deal. Maybe he'll realize that he needs to sign for one year and pitch well again in 2014 to get the deal he wants next winter (when he won't be tethered to a draft pick). Maybe the Royals will just give him the 4/$50M he wants. Whatever. It doesn't matter. They would probably consider this situation a loss due to the fact that they don't want to spend any more money -- as evidenced by the Emilio Bonifacio DFA -- which is the major reason this scenario is unlikely. On the other hand, they might see the situation from the fans' point of view to some extent -- which is: Why let him sit out and get nothing in return? Might as well try to convince him to take a one-year deal -- or give him the bigger deal he actually wants. Again, this is unlikely, but it could happen. The Royals stand to lose somewhere between $1 million and $2 million by letting Santana go, though that's just because of the recommended slot value of the pick, so it's not literally a loss. But I mean, if you're going to lose the pick anyway, why not get something out of it?

In Scenario Two, they let Erv sit out, and some other team swoops in and signs him to his dream contract on June 8th ... or something like that. Kansas City loses out on their compensation, and Dayton Moore looks like a bigger dumb@$%! than Bean Stringfellow. This is probably what will happen, at least as far as the Royals are concerned -- who knows what kind of deal Santana will get if he sits out. So, in all likelihood, the Royals will get nothing out of this situation but a lighter draft budget and one fewer selection, but the Glass family will make a little more money on the team this year!!! (Or lose a little less if you believe them). 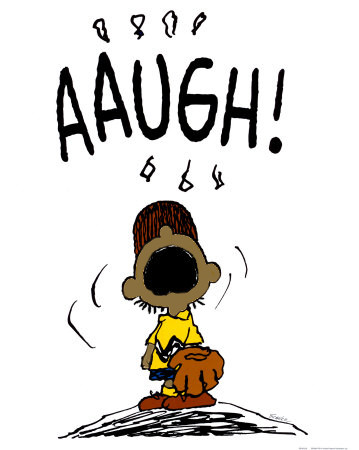 So, that's a mix of Jarrod Dyson and Alcides Escobar because I'm dumb, but @Nick_Pants is awesome. He was kind enough to put this together at my request. His site is amazing. Check it out.