I will be subjecting the readers of this website with my thoughts. They will often be erroneous and accompanied with amateur photoshops.

For example, this is my Royals Review rookie card: 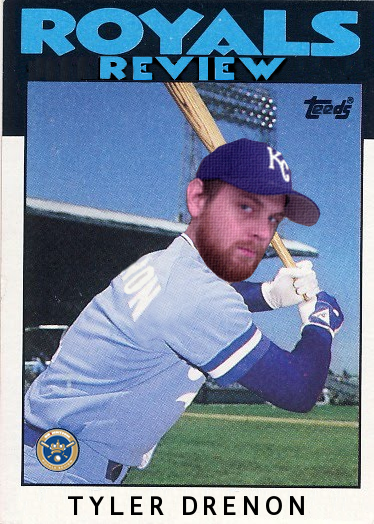 I've written about the team at MLB Daily Dish for a while now. Most of the articles in the Royals stream over there are from me, but it won't be that way for long. We recently added Josh Duggan and Joshua Ward to the masthead, so expect some great writing and additional Royals stuff over there from time to time.

A month ago, I wrote a story at MLB Daily Dish about the Royals organization, and the hazy business side of Kansas City baseball -- you know, the only part team owner and former Walmart CEO David Glass seems to care about. Anyway, while I was reading things hidden in the umpteenth "O" of my Google search, I found some information about Glass' connection to the development of a trend-forecasting software database called Retail Link. Glass was Sam Walton's righthand man in the 80s, and the two of them spearheaded the project in an effort to maximize efficiency by collecting data on consumer behavior. Coincidentally, this journey began in 1985 -- the last time the Royals were in the playoffs. It ended up taking years to refine, and cost the company approximately $4 billion.

In a nutshell, this software tracks your behavior in Walmart stores. The data are precious to the company. The information they have collected using several methods, including the bar code system, allows them to require suppliers to operate within the Retail Link system or risk being "shut out of America's dominant retail chain."

Obviously, Google searches show me the same things they show you. While I was looking into articles that might support the notion that Glass is "using the same cost-cutting management style of the Walmart company with the Royals baseball team, resulting in large personal profits for himself but a poorly-performing team," I read articles from sources like PBS and the New York Times. So, I incorporated their claims into my story about baseball because I thought it was interesting, and that it kind of resembled Glass' approach in baseball.

Then, I wrote my silly little article -- mainly because I don't welcome placation and had grown tired of hearing how the team was finally spending despite evidence that suggests league revenue was at an all-time high last season.

However, the article I wrote was predominantly about my skepticism of the notion that a businessman like Glass would suddenly consider operating at a loss after about two decades of shadowy practices -- including, but not limited to everything in the Royals section of his Wikipedia page (like halving the team's payroll after taking the helm when Ewing Kauffman died, opposing a settlement with the players during the strike of 1994-95, purchasing the team for $96 million despite Miles Prentice's $120 million offer) -- which cites several major newspapers and respected media outlets. My article included just a few paragraphs specifically dedicated to Retail Link.

I don't have special powers over the Internet. Nor do I have the ambition or a creative enough mind to manufacture a nuanced campaign against Retail Link. I didn't even know it existed until I started reading about it last year, and I still don't really care about it very much. I just like baseball, and I want the Royals to be good.

They paid some poor bastard to read my article and respond to it.

Speaking through the company's "supplier education" site, that person downplayed their vehicle of dominance as just "bar codes," failing to provide any real evidence disputing my claims. Although it was on a much smaller scale, their blog post is reminiscent of the Royals' decision to revoke the credentials of two radio reporters in 2006 after they asked Glass questions he didn't want to answer. They don't handle criticism well, but they can dole it out -- and sometimes, they quietly take away your bar-coded press credentials. Other times, they choose to do so with the sassy, ad hominem voice of a corporate trainee stashed away in an Always Save training bunker miles below the surface of the earth.

It's obvious to me that this isn't an incredibly important matter to a company the size of Walmart, but why would they take the time to respond? Didn't they sort of validate everything I wrote by acknowledging it as a fire that needed to be put out?

So the reality of Retail Link doesn’t have the science fiction glamor of a "miasmatic hurricane of subordination," but it does have a lot of power in the right hands.

Well, at least we can agree on that last part.

Anyway, I thought this was kind of a funny story, and that it might be a good way to introduce myself.

Thank you in advance for reading anything I write.