The Royals want you to Be Royal

Share All sharing options for: The Royals want you to Be Royal

Good morning from a snow bound Kansas City. Well, the Royals unveiled their 2014 slogan. Normally, I don't care about that sort of thing. I put team slogans on the same level as Sluggerrr (when he's not being gangster) and ferris wheels. But usually, it's good fun. "Come To Play." That was last year's slogan. And I had to look that up. "Our Time." That was fun strictly for entertainment value when it turns out it wasn't "our time." And we had some fun last year with a little satire. 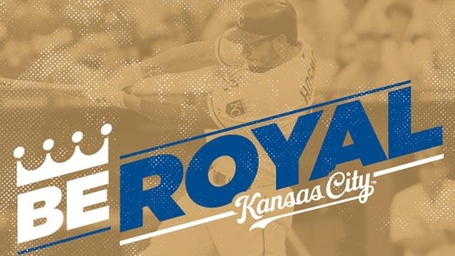 Be Royal. I'm good with this. Obviously, it's some kind of play on a pop song that I'm sure has been overplayed. Whatever. Own it. Take back the #Royals hashtag on my Twitter search.

Designing a team slogan has to be one of the more difficult marketing jobs. You'll get torched for the awful ones and ignored for the ordinary ones. And let's face it, there aren't truly any great team slogans. This slogan has a little swagger to it, without the danger of turning into the "Our Time" debacle. It's ambiguous enough that as soon as I hit "submit" on this post, I'll completely forget all about it. Next year, when the Royals announce their 2015 slogan, I'll Google "Royals slogans" and this post will come up and I'll be surprised to see that I wrote it. That's why this slogan is perfect. Don't believe me? Here's a list from 2011. Find one that's really great.

These days, a slogan alone isn't good enough. It's not going to get the young people all fired up. Face it, that's usually what fireworks and dollar hot dogs are for. So there's a video accompaniment. And while I dig the imagery, it's breathtaking in its hyperbole.

The first :35 seconds of the video serve as a recap of 2013. Which is kind of strange when you're trying to look forward. But I get what's going on here. It's positioning. It's a continuation of Dayton Moore's "everyone is going to improve" line of reasoning. 2013 was awesome! 2014 is going to be more awesomer! Yeaaaaaaaah!

Now as the sun rises on another epic campaign, every player, every coach, and every loyal blue fan will reach deep down inside for something extra, to elevate this team and this city to an even higher level.

I am getting pumped up. A rising sun... a new dawn. Epic campaigns. Players, coaches... Loyal blue fans. Unite! Plunder! By this point, I'm close to working myself into a frenzy. At the very least, I'm thinking of jumping in my car and hitting the nearest QT for a gallon of Mountain Dew and a handful of pixie stix. Something to take the edge off.

For through our veins pumps Royal blue blood. A sign of our proud heritage. And our undying spirit that will inspire us to reclaim the crown that is rightfully ours. On the field, in the clubhouse and in the stands we have the leadership, poise and determination to rise above anyone who stands in our way. To reach our destiny. To live up to the name emblazoned on our shining white jerseys. Because in Kansas City, that's what it means... to Be Royal!

By this point, I'd like to kick Sun Tzu's ass. I want to put on my shining white jersey and destroy pitiful baseball teams. I want to stand beside leaders and smite anyone who dares stand in my way. I am willing to spill my Royal Blue Blood for the cause...

Breathe. I need a moment to collect myself. But doesn't it sound like the speech Dayton Moore probably gave to David Glass when he was angling for a contract extension. For real, watch it again but substitute a Dayton Moore voice for the narrator.

"You see, Mr. Glass, our undying spirit will inspire us to reclaim the crown that is rightfully ours."

"Fine, Dayton. Do you want one year or two?"

Turns out a simple YouTube search would have saved some poor writer a few minutes of his time:

Honestly, there were enough signature moments from 2013 that you could cut together a highlight reel and supplement it with Denny or Ryan on the call. Although I do like the liberal use of the Phantom camera shots. Super slo-mo is cool. I enjoyed the edit but if I watch it again, it will be with the sound turned off.

The scorecard so far: The slogan is benign. The video is banal. But there's one more part of the promotional campaign: Billboards. And as Retro noted in a FanPost (I know... I was surprised to learn they still exist, too.) they are crushing this part of the campaign: 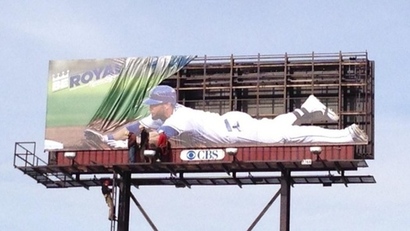 Slow clap here. Really clever. Simple. And noticeable. It has everything a quality billboard should have. Great work.

Taken together, the rollout of the Royals 2014 slogan has been solid-average. Although I'd downplay the video and just stick with the slogan and billboards. Following on the heels of FanFest, it's been quite a rollout where it's been impossible to miss. That means baseball is almost here.

Does anyone have a snowblower I can borrow?