A little off the wall material

Plenty of material is freely available on the internet to help preview the upcoming baseball season. Most of the information is redundant and basically useless. Today, I am going at three of my favorite sources for a different perspective not found anywhere else.  While each does cost a bit, each is well worth it in my opinion. (Note: I have not been compensated by the three sources to write this article. It is totally my opinion)

I will start from the cheapest to most expensive

While this option is fantasy centered, it gives a short player preview on each player's page. 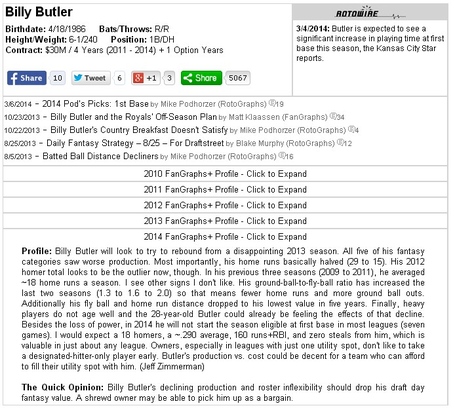 The part I like best is the previous profiles to see how the player projected over the past five seasons. Going back through each of Butler's previews, they keep mentioning if only his power can eventually turn into home runs. Times never really change.

In addition, all the past fantasy preview articles and any FanGraphs written ESPN Insider articles are available.

This book is 351 pages in length and goes into a exacting detail on the possible starting pitcher. Paul Sporer does the player previews while Doug Thorburn looks at each pitcher's mechanics. Here is Vargas's intro:

Jason Vargas (31 years old) - Vargas wanted nothing to do with hitters last year. He had the most pitches "away" to batters among lefty starters at 59.6 percent of the time. To righties, it was the fastball (52.2%) and changeup (36.6%) that peppered the outer part of the zone. To lefties, it was the fastball (59.1%) and curveball (29.7%). Righties still pummeled the fastball (1064 OPS), but they struggled mightily against the changeup (430). Lefties didn't quite kill the heater, but still had success (853) while also flailing against the secondary pitch, in this case the curve (442).

If a person loves to digest too much information on starting pitching, this is the source for them. It isn't just the main MLB starters. The number of starters examined is deep which includes such pitchers as Lamb, Almonte, Adam and Dwyer.

Just a classic source which should be acquired each season and is a must buy for anyone interested in prospects.  Where else is a person going to find out that Samir Dunez "... is one of the best pure hitters in the [Royals] organization and polished enough that he has a shot at making the jump to low Class A Lexington.." Or Daniel Rockett (great name BTW) "...could been drafted soley on the high light reel of catches."

It goes 30 prospects deep for each organization with a decent write up on each player. Additionally it reviews the previous season's draft. This book is just a great bathroom reader.

Well, those are my three must reads for the upcoming season, does any one else have any other recommendations?