I'm a rookie visitor to Spring Training. I've always wanted to go but there was always something getting in the way: no vacation time, no resources, or not a high enough priority. However, after a couple of other things fell into place, 2014 was the year.

Just for some background: there are 3 of us traveling and Spring Training was the last part of the trip. So far, we had hiked in and out of the Grand Canyon with perfect weather, visited four other national parks, traveled on Route 66 and eaten a requisite meal at a mostly-not-sketchy mom and pop cafe, took a picture of a statue they had on a corner in Winslow Arizona trying to capitalize on the song most made famous by The Eagles, eaten at an In-N-Out burger, and visited the world famous (hint: it's not) TUBA CITY!

This set of Fanposts will be broken into 3 parts and I should have them all posted by the end of the week:

Also, I've put things into a few different categories both to share with others about our visit and also to help those who are planning to go to Spring Training in the future. 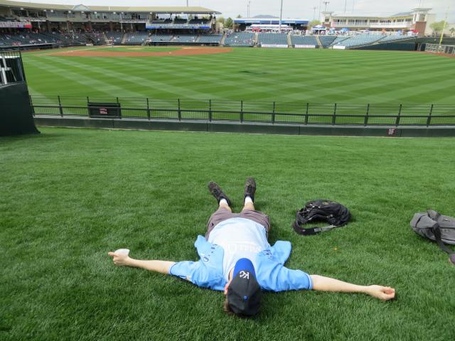 Did I mention it was Arizona in the winter? The first day was in the low 80s and it was the warmest day we were there. Even coming from Houston, winter weather doesn't get much better than this. Astute observers may notice the little cone of ice in my left hand. We'll get to that in a little bit. 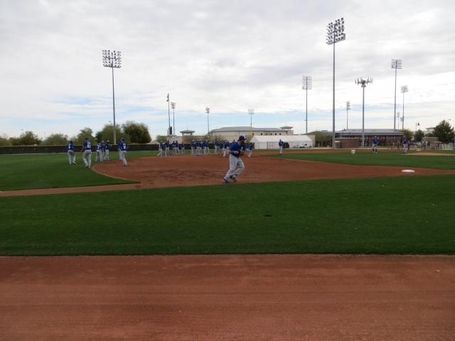 I love going to a game early just to sit in the stands and watch batting practice. There are few things more relaxing to me in the world. Spring Training is perfect for this. It struck me as a little odd: these are the same drills we all did in grade school baseball. You'd expect something more advanced for the majors but it's still about working the same muscle memory and repetition.

FYI: Most teams practice at 10 for the 1:05 games. Still that's Mountain Time so it's not too early. 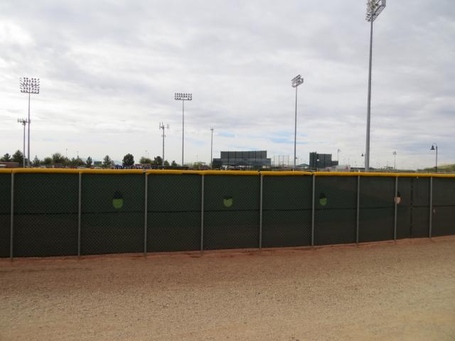 There are various levels of fan friendliness around Phoenix with Surprise being at the top of the list of the parks we went to. Notice the pre-made "knotholes" where you can just stand and watch? There are 8(?) practice fields on the Royals side and it feels a lot like a suburban baseball complex.

We found a spot beyond left field under the only shade tree in Phoenix. For about a half hour, we also chatted with a guy who used to be in the Cubs system and does some really meaningful work with at risk youth. Any balls he caught went to players on the little league team he coached as rewards for good plays (neat idea!). He was there with his son who was playing in a college baseball tournament for Santa Clara at the Surprise facility. There were some OU baseball players milling around, too. 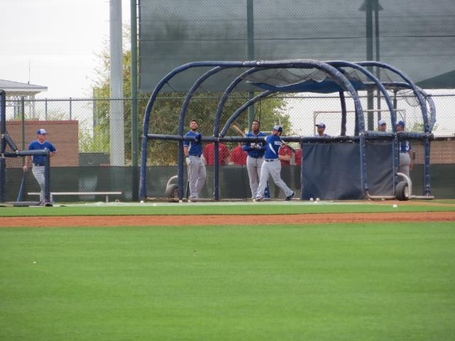 After some basic running and fielding drills, it's time for batting practice. First up were Sal, Hosmer, and Moose. They'd each rotate in for about 5 swings until their time was up. Left field was much less popular than right field so anything hit out to left would go to one of us or a couple of ball hawks who were camped out in left center.

If I caught a ball, it was going to be mine. I've been to over 100 MLB games and I have exactly one baseball. It was from one of those cold April days at Kauffman and the Orioles were in town. We were in a mostly abandoned Hy-Vee section with four college guys of varying levels of sobriety sitting a few rows in front of us. They were working one of the Baltimore players, cheering him on and trying to get a practice ball thrown up to the 400 level. Eventually he acquiesced and threw but he overshot them about 5 rows and I caught it. I offered it to the guys as they did all the work but they didn't want it as they didn't catch it.

Back to Arizona, Sal launched one over the fence that got caught up in a tree a few feet in front of us. I quickly ran up and grabbed it off the ground. However, I think I cut in front of my friend who was also heading for the ball. Honestly, I have slow reflexes so it took a while to process but for the next few minutes, I was feeling a bit guilty about that (happy ending: he would have the Sal ball by the time we left).

Next up were Gordon, Butler, and Aoki. As we were getting on towards 11, the crowd was getting a bit thicker but right field was still much more popular as Gordon just keep crushing them like Hosmer and Moose before him. Butler was also hitting them out, just more to center than to right. However, he got ahold of one and launched it maybe 10 feet from where we were standing. I ran up, camped under it, and... it bounced off my palm onto the ground. D'oh. I recovered and picked it up but, man, that hurt for the rest of the day. It also left a large bruise on my hand that lasted for the rest of the trip.

Still, it was pretty awesome. As we both had souvenirs (my wife didn't really care for one) and we had been there over an hour, we went to check out the stadium which was now open. 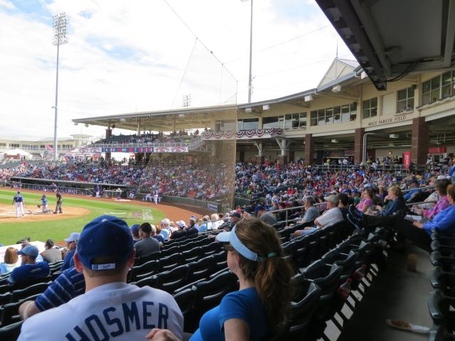 This is the view from our seats. We were about 10 or 12 rows behind the Royals dugout. We got them from the Rangers they day their Spring Training tickets went on sale, but not bad at all for the $25 cost. The first game had the perfect feel for baseball in my mind. Is the regular season baseball too exciting?!? Just lay back in the sun and enjoy a leisurely game where everyone gets to play. There are no long commercial breaks and, at least for the first game, no one going through really long and elaborate batting or pitching rituals: just a lot of grip it and rip it. Even with all the substitutions, it takes less time than a regular season game. It was absolutely beautiful!

The stadium was maybe half full and fairly evenly divided between Royals and Rangers fans. I think the double home game is especially nice as both teams practice right there and then fans can go into the game. Plus, both teams feel like they belong even if on the scoreboard one team is home and one away. Side note: of all the stadiums we went to, Surprise was the only one with free parking.

Sorry, no pictures for this one. I was hungry and the footlong hot dog was gone before I had a chance to take a picture of it. It tasted like a hot dog at a baseball game in February, which is to say "great". They had the standard mustard, ketchup, and relish but we ran into a guy complaining about how they didn't have any ranch for his burger.

Also, this was also the only day we could find the Designated Driver booth. As we're not drinkers games, it's always a free coke for us. It was small and it was Coke, which was a little odd since Kauffman is a Pepsi stadium, but it was free. In general, the concessions were what you expect from a ballgame: no more but no less. That said, there is more and more elaborate stadium food and we'll see some in the next couple of days. 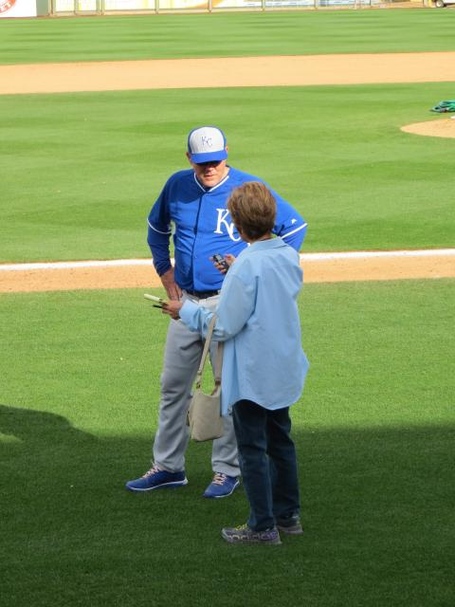 I think Yosty must have been in heaven: pinch runners and calls to the bullpen galore! Keeping score at Spring Training is fun. I joke that my scorecard is a "fictional approximation of what happened in the game" as I don't always pay perfect attention. But this is especially true in Spring Training. There are a lot of new and young players who won't make the 25-man roster, many with numbers that would belong to NFL offensive linemen.

From a selfish perspective, kudos to Frank for at least keeping the same positions in the lineup instead of doing double and triple switches. In Saturday's game, the Angels seemed to do wholesale line changes with no rhyme or reason to who went into which spot in the lineup. The Spring Training scoreboards are not huge and they don't have full lineups so when changes were made, you had to be fast or you would miss them. At one point, the stadium announcer ran out of time and we never even heard some of the changes. 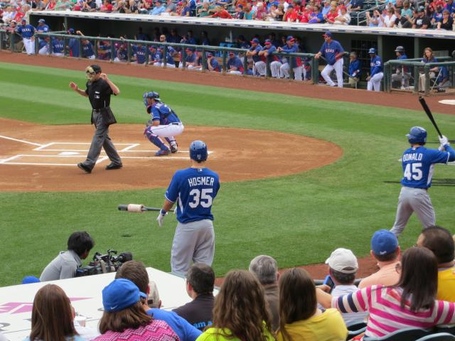 While practice is a great chance to get close to the players, even during the games you really are near to the them. At one point before the game, Butler was out signing and I got my batting practice ball signed, making me a happy camper. That said, I think it's pretty rare as he was one of only a couple players I saw doing that before the game. Talking to other folks, the best time seems to be after practice is done or when they are arriving, but we missed this as we went into the stadium too early.

For the game, Hosmer was the only Royals starter to not get either a run or RBI. He's a bum! Trade him! Even Jason Donald (who?) got one! Yeah, silly, but I ended up overhearing a couple of Rangers fans in the bathroom, disgusted by how bad the team was getting beat. And how they had no offense. Or pitching. And how they were losing to the lowly Royals. ...yeah, at a Spring Training game. 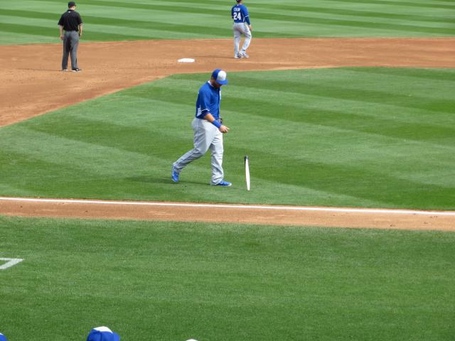 Moose had such a good game that Beltre tried to kill him with a bat (it might have been Rios, but work with me here). He was 2 for 2 with a walk before being lifted for a pinch hitter. As I alluded to earlier, every starter had a hit and either a R or RBI except Crime Horse. He went 0 for 4 and I think he got that last AB just so he could try to get a hit as all the other starters were out of the game an inning or two sooner. Shields pitched a perfect first and we saw a total of 7 Royals pitchers. 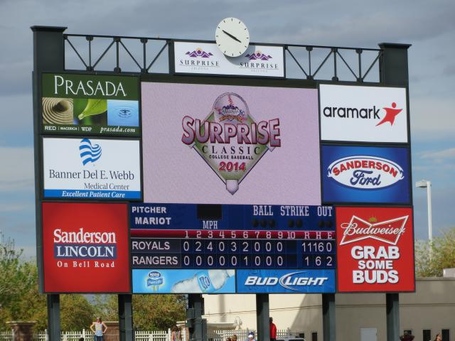 A great game was had by all. Towards the end, the only thing we were thinking would have made it better would have been if Soria had come in for Texas. That would have brought cheers from both crowds. I think we would have also liked to try out lawn seats, considering the weather. We were planning on getting them Saturday. 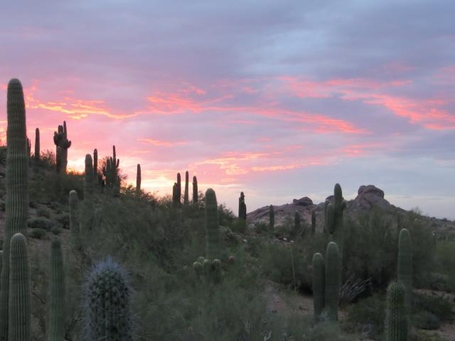 Almost all Spring Training games are at 1:05. While the daytime sun is great, the lows are in the 50s so baseball could easily go later. Our usual travel plans involve tourist stuff during the day and baseball at night but this flips that script. As it's open until 8, we went to check out the Desert Botanical Garden. I found the idea unique due to the "exotic" nature of cacti and they had some glass and light exhibits thrown in for good measure. The admission price of over $20 struck me as a bit high while a friend said it was probably twice as much as it was worth.

Really, Surprise was our favorite day and experience. It was most relaxed, everything went smoothly, and we had some unexpected fun. Next up: some non-Royals games.