At least he isn't Jonathan Broxton

Donnie Joseph is a lefty killer who the Royals got back in trade for Jonathan Broxton in 2012. While the bullpen's health was a reason for Joseph mainly staying out of the majors in 2013 (5.2 IP total MLB IP), he is basically just a LOOGY at this point in his career.

He has owned left-handed hitters over the last three minor league seasons with 14 K/9 (drops to 10.1 vs RHH). He knows and is working on his left-right discrepancy:

I am always trying to improve my game [by getting right handed hitters out]. I know I can get both of them out. I just need to work on getting the righties out.

His main problem is the high walk total. Only 12 qualified relievers (includes Tim Collins) had a walk rate rate over 4.5 BB/9 in 2013. Only 38% of the pitches he threw ended up in the strike zone so the high rate is understandable. To see where he is missing, here are the percentages for pitches in each zone. 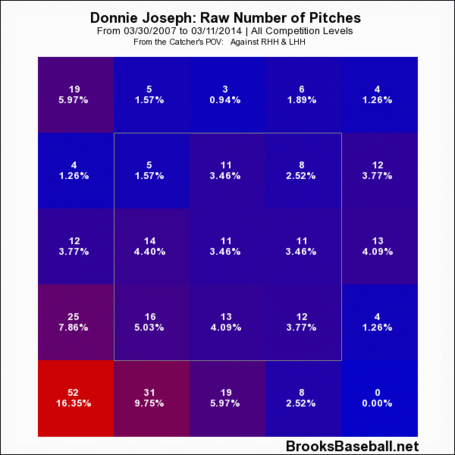 Well, he doesn't throw meat balls for sure, but the gophers better watch out. His inability to command the strike zone will probably limit his upside.

Joseph comes at hitters with only two pitches, a fastball around 91 MPH and a 85 MPH slider. This spring training, is velocity is down about 3 MPH from last spring training. 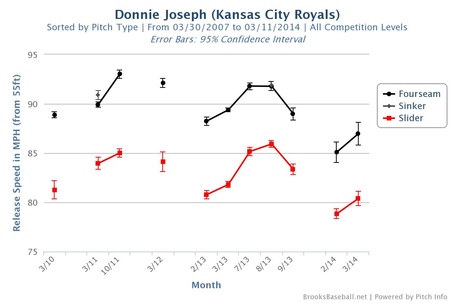 While, he may see a velocity jump during the season, he is starting at a lower baseline this season.

Donnie Joseph may struggle a bit in the majors, but his mom makes great TV. During his first major league appearance she was extra excited/nervous. As Donnie told me, "She was so embarrassed. She will be on ESPN forever."

If you have the ability, go back and watch the whole inning.

It is likely Joseph will see more major league time in 2014. He will need to find the plate more often and hope his velocity comes back up to have success.