I wasn't sure this warranted an annual update as the Royals pro shop is seemingly as reluctant to add items of actual value to their inventory as the Royals front office is to adding personnel of actual value to their roster (no new garden gnomes or game-used dirt trinkets?? The HELL??) . But the weather's nice out, Opening Day is just around the corner, and wanton consumerism sprung anew in me as I was looking for a Royals decal to try to balance out the sin of having recently purchased a cardinal red truck. So join me in perusing The Official Online Shop of the Kansas City Royals, as I search again for items to help identify ourselves as TRUE fans of our boys in blue. 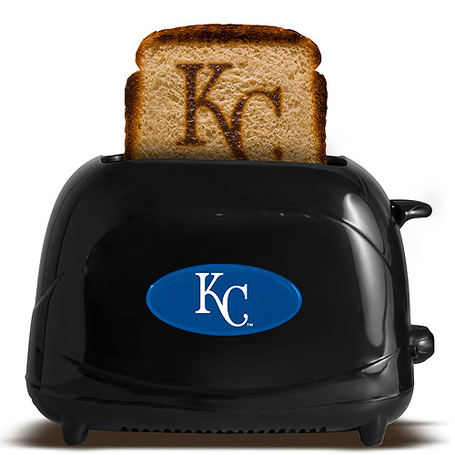 Not just a toaster. An elite toaster, which is guaranteed to perfectly scorch our beloved logo right into your morning carbo-load just like in the picture (probably). Mmm, tastes like WHOLESOME! Just like our Royals! Honestly, I can't think of a reason not to own one of these. 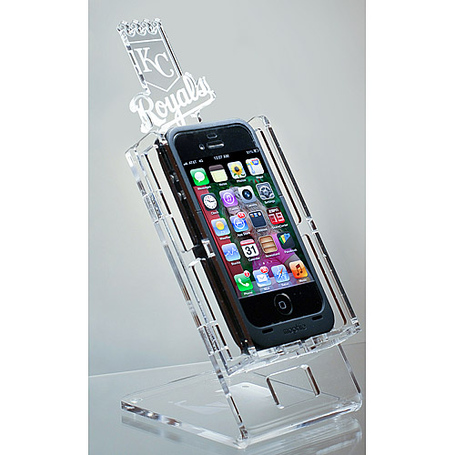 Sure, we might have made similar acrylic photo stands back in 7th grade shop class, but this one holds your smart phone! And is laser-embossed! I know people generally put their smart phones on a figurative pedestal, but can anyone figure out the value in this? If it held your phone in landscape, it might be a nice, kitschy object to put on your desk to let your coworkers know that you are fully capable of streaming MLB.tv through your wonder device and that there will be no productivity to be had out of your cubicle during day games for the next 6 (or 7? please?) months! But nope, it holds your phone in portrait stance, so it's not going to hold any value for you until you get to put your new iPhone 6 on its Royals throne and look down on the lowly peons that still just have a 5s. 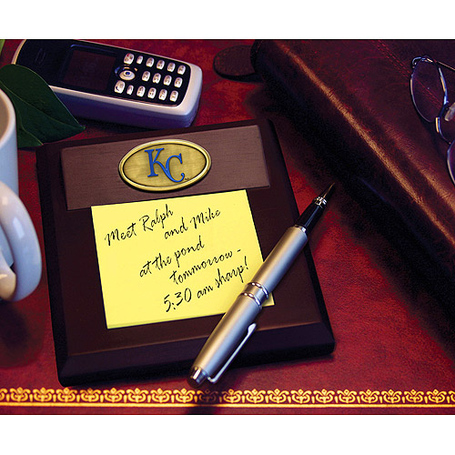 Give your well-thought out post-it notes the home they deserve by encasing them in this distinguished-looking memo pad. Probably straight from the desk of Dayton Moore! And yet the note on display seems to have a distinctly Frank Yostian narrative. Fishing trip with Ralph and Mike at the pond, 5:30 am SHARP! Ralph and Mike (pseudonyms?) have zero tolerance for tardiness when it's time to reel in bluegill! 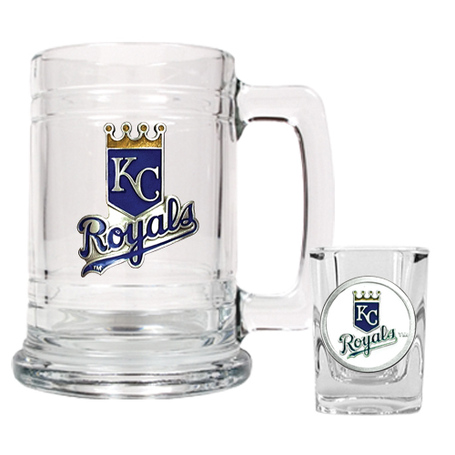 A handy way to double your alcohol consumption in a Royals-centric manner? Yes, yes... This will come in handy this year. I'm scowling at YOU, Jason Vargas, #2 starter. 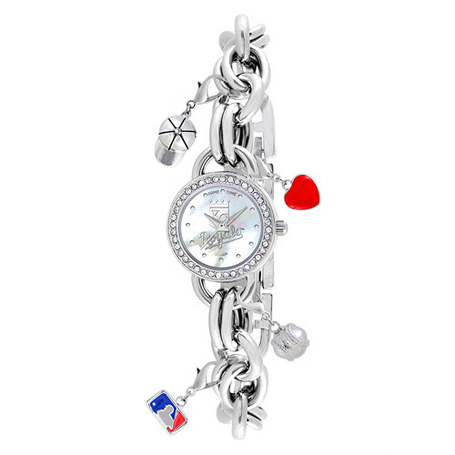 Pandora this is not, but hey, now you don't have to shell out $80 bucks for a new charm every new year that grandma makes it to another birthday because this baby comes pre-loaded with four! The centerpiece is obviously the Royals logo on the faceplate, but the chain is just flush with baseball icons that even your mom can understand the imagery behind (the key being the heart, which is synonymous with GRIT). This jangly item also effectively works like a cat bell, letting you know where your favorite elderly Royals family matriarch is at all times. 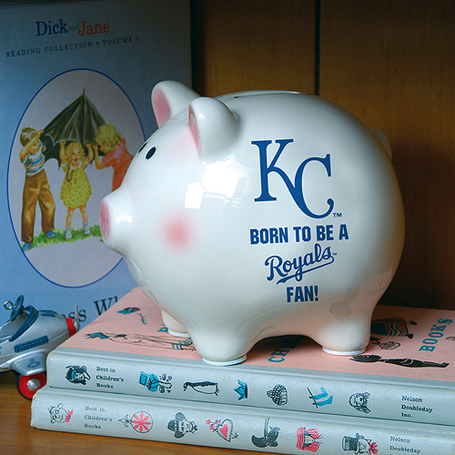 So you've decided to procreate? Good for you, and congratulations! (no, seriously). What a lucky kid to have the masochistic lifestyle of cheering on the team with the longest-tenured run of ineptitude thrust upon him or her. This item will serve perfectly to tutor your little bundle of joy on what it's like to follow this Glass-tastic franchise. "See little Billy, we put our money into the Glass bank account little piggy, and then we'll never ever reap any benefits from it because to do that, we'd have to break the piggy. And then he'd be sad." 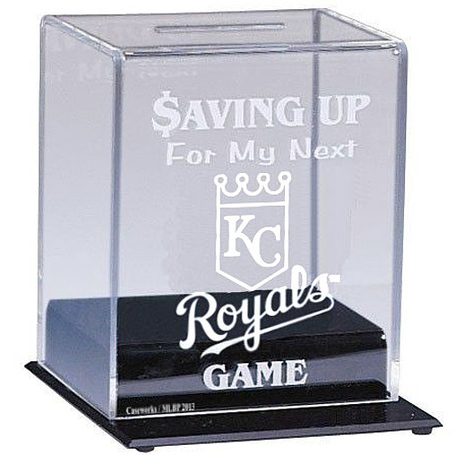 And here's the Royals store's retort for my excessive cynicism on the last item. "You want a $100m payroll?? Sell out every game and we'll talk." Touché, Royals store. Touché.

Diamond Dishes: From the Kitchens of Baseball's Biggest Stars ($24.95) 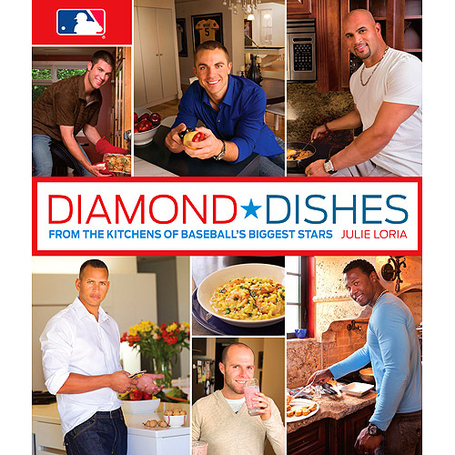 Sadly, out of the 20 Major League players who are featured in this book, none are current (or former) Royals. So no country breakfast recipe or Hit-It-A-Ton barbecue sauce to be found, which is a bigger slight than the 2012 home run derby, IMHO. But it's such an important addition to any foodie's culinary arsenal that it's still featured on the Royals site, so don't miss this chance to learn how to make Joe Mauer brand lutefisk or 187 pages of Miguel Cabrera's favorite entrees (probably). 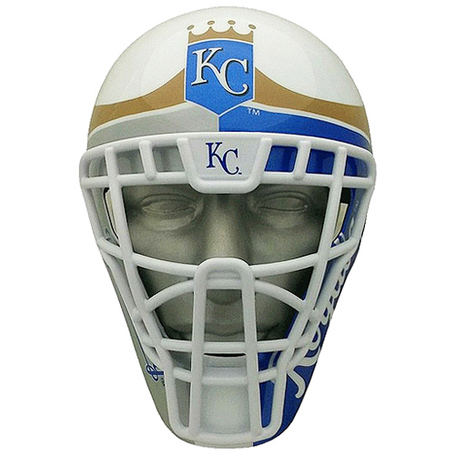 I for one cannot think of a more inappropriate item to wear in mid-August Missouri humidity than this fully-encapsulating plastic incubator. Then again, it might be a useful shame item to let the irritated neighbors in your section know that you've cut off your drunk friend for a couple innings for spilling his round of beers all over them on the way back to his seat. 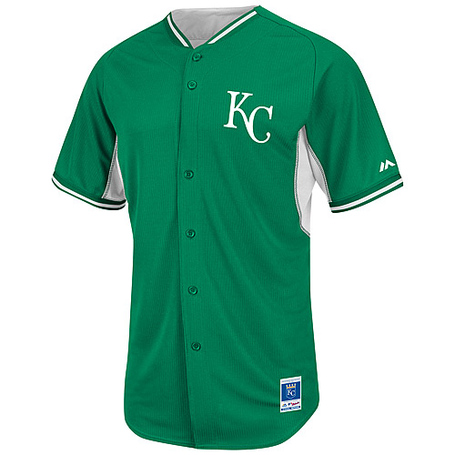 For one day a year while you're busy ruining beer with green food coloring, you can be THE most topically relevant fan at your local Mickey O'Bennigan's American Irish Bar! And if you choose to imbibe to the point of regurgitation, hey, the stains will blend right in! Basically any time you can spend $80 on a jersey you wear once a year, you have to do it - especially since it's guaranteed to promote your fandom at a time before the Royals are out of when the Royals are still in contention. 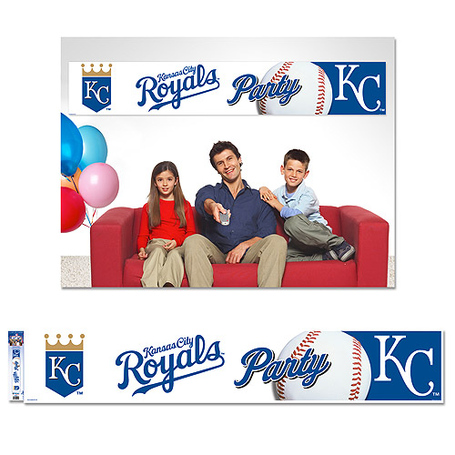 Ok, so it's a party banner. With two different fonts that elevate at two differing angles which is playing hell with my OCD. That's fine, nothing real special here. I just love the stock image, which appears to be a dad settling in with his two naive little Royals fans on Opening Day, trying to suppress the "here we go again with this shit" look plastered on his face while the Royals are inevitably losing a James Shields start 1-0. 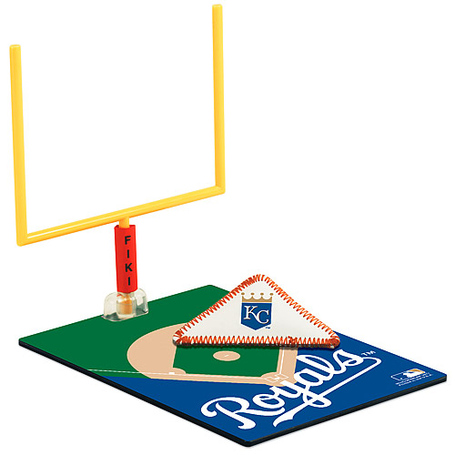 Because in a small way, paper football feels like baseball when you call the goalposts "foul poles" and put red stitching on the non-football. 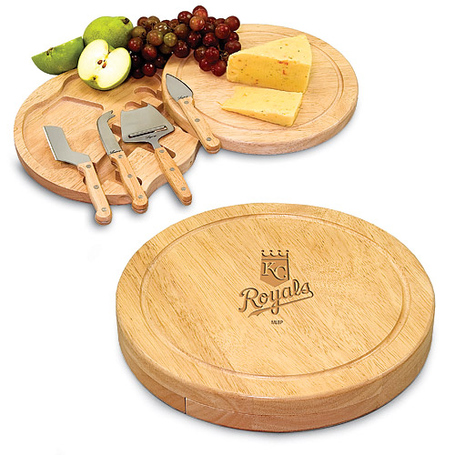 For when your tailgate needs something classy, like the opening of a car dealership. Or Mr. Peanut. Actually, I just posted this here because I have no idea what any of those utensils specifically are used for. I seem to remember at least a couple of them from the ending of Braveheart. Maybe you shouldn't actually bring them to your tailgate. 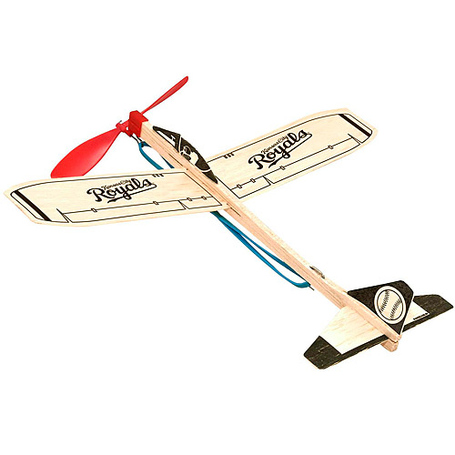 Remember when this happened? 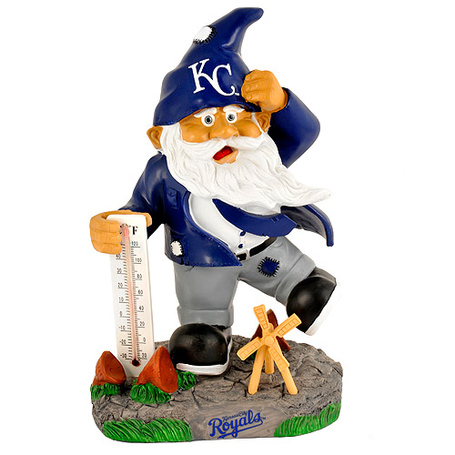 Alright, alright, fine. Here's a garden gnome. I can't remember if this one was available last year, and I'm too lazy to check and see if I've posted it before. Correct me if I'm wrong though, but aren't gnomes supposed to be, umm, small? Then why the hell is he towering over a windmill?? 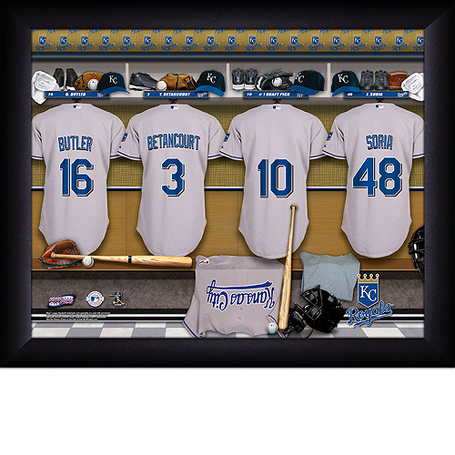 This one is not new. I've posted it before. I just wanted you all to know that it still exists and it can be yours for $49.99.