It hadn't rained in 2 months in Arizona but that came to an end on Saturday. Fortunately, we were still able to get in advance scouting for the Battle of Grass Creek. And everything is awesome! 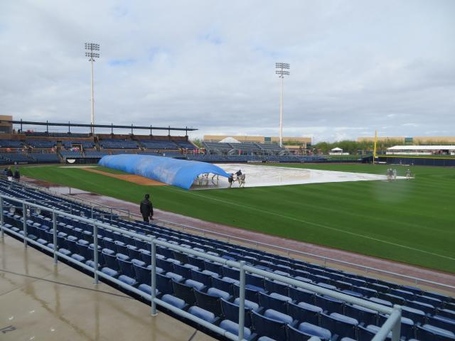 Weather was the story of the day. Spoilers: Rain overnight cancelled the practice, it almost delayed the start of the game, and we only made it through 7 innings before it was called. Heck, while waiting out in the concourse to leave, we even got some hail. It was pea sized, which I don't think even registers in Kansas, but it was still something. 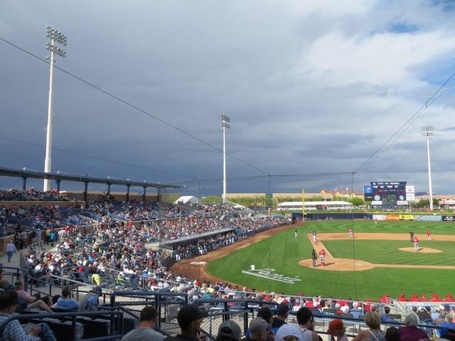 Peoria was similar to Surprise with a nice complex and shared stadium for the Mariners and Padres. Again, note the ominous clouds. Despite that, there was a good crowd. I'm not sure if it was just Cano (BOO!) or whether the Mariners have a lot of supporters in Arizona. In their home field and they enjoyed a distinct fan advantage over the Angels. 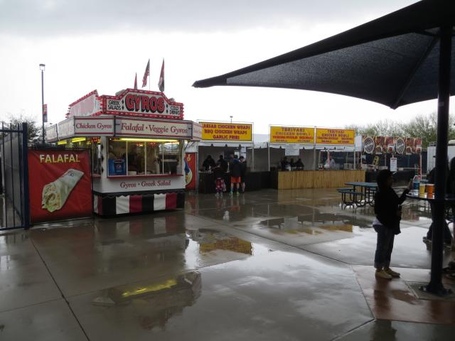 There may not be sushi here like at Safeco but you do have some variety. I had the Teriyaki plate and it was plentiful. I really want to be nice and say it was pretty good but I can't figure out a way to accurately do it without saying "it was better than Panda Express"... which just sounds damning with faint praise. Oh yeah, and still raining. 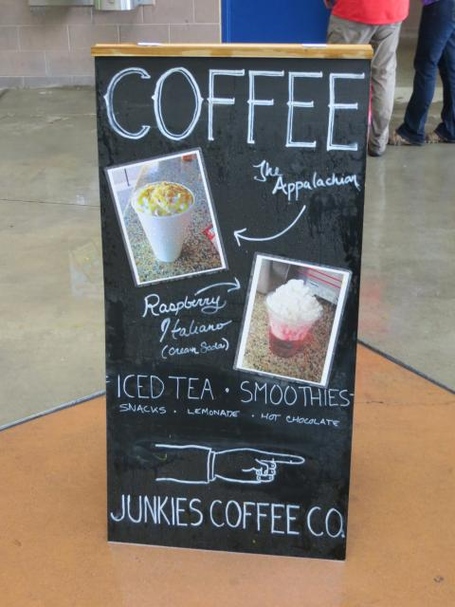 And what would Seattle lite be without a boutique coffee shop? I admit it: I had the raspberry Italian creme soda pictured there (actually, half raspberry and half vanilla) and it was very good. The "baristas" were perky and they tried to make it feel indie with little personal touches like writing your name on the cup along with your order. HEY! I had a dog and coke yesterday and pizza and nachos tomorrow- DON'T JUDGE ME! 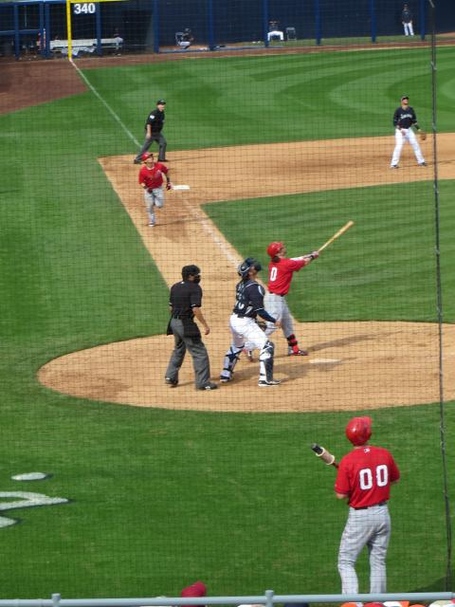 Ah, Spring Training: the baseball time of year when you can have 0 and 00 in the same picture. Due to the rain and risk of injury, the Angels played very few regulars except starter C. J. Wilson.

The Mariners played mostly starters behind Scott Baker so we got our chance to BOO CANO. However, there was a problem: you can't escape the scourge that is Yankee fans. While the Seattle faithful cheered heartily, there were also boos and some guy up on the upper deck even yelled "Traitor!" Frankly, we felt embarrassed as there was a chance we'd be associated with those hypocrites. We started coming up with cheers like "BOO CANO! We're-still-mad-about-the-2012-All-Star-Game" and "there's-no-way-you-heard-worse-in-one-weekend-in-KC-than-years-in-New-York! BOO!" But they just don't roll off the tongue. 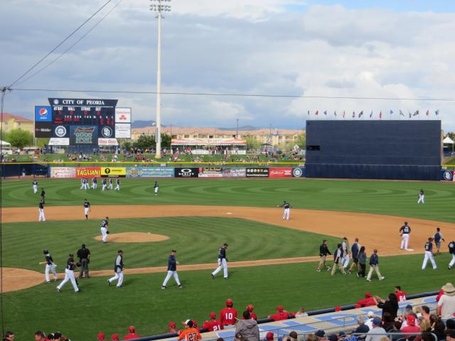 As opposed to the Royals-Rangers game where we just saw a parade of pinch hitters and pinch runners in the 5th and 6th, the Mariners had a mass exodus of starters midway through the 5th. It gave the fans an opportunity to give a standing ovation to the team as a whole. It was the only time we would see that at Spring Training. I don't think one way is better or worse but it was different.

Our original plan was to take a sunset hot air balloon ride. However that was cancelled the day before due to the expected weather.

Our new plan was to go to one of the rare Cactus League night games on Saturday night. None of us had been to a doubleheader before and we thought this sortof counted. We drove from Peoria, which is a northwest Phoenix suburb, to Scottsdale on the southeast side. We ran into quite a bit of rain on the drive that was on its way to Salt River Fields. While a chipper parking attendant told us they got in the day game and the night game was still on, we were dubious. We decided we didn't want to chance it as we had already been rained on once today. It turned out to be the correct decision as the game was ultimately cancelled.

Instead, we went to a nearby Studio Movie Grill and saw The Lego Movie. I'm not sure about the dinner at the theater concept. If it were a movie that required a lot of attention or was longer than an hour and a half, I don't think I would like it. But for something short and light like this, it worked well. I think we enjoyed the movie and laughed more than most of the kids. Indeed, everything was awesome.

Whereas yesterday's game felt like a practice, this one was more like watching an A ball game interrupted by rain. While it put a bit of a damper on our plans, we still had a good time and were ready for our final game tomorrow.

To balance the pictures out with Part III, here are some bits from Monday. Our plane flight home was in the afternoon so we couldn't catch the game but we wanted to see one more practice. Conveniently enough, the A's have Spring Training a few minutes from the airport. 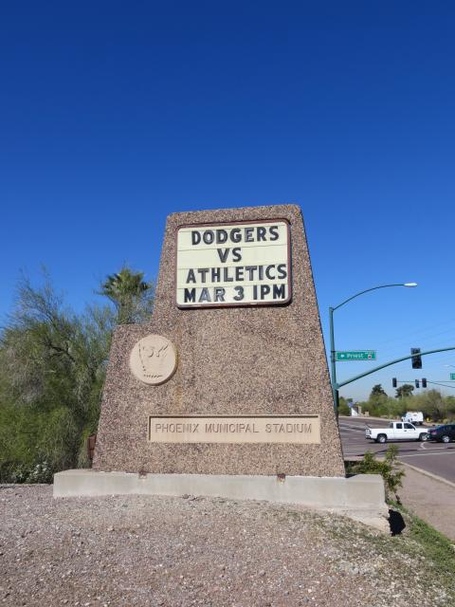 Phoenix Municipal Stadium was built in the 60s and had the distinction of being the first air conditioned stadium. Apparently this is the A's last year at "the Muni" as they will move into their new Spring Training home in 2015. It's kindof a shame as I like the parallels with them playing in the dump that is the Coliseum and the oldest stadium on the Cactus League circuit. 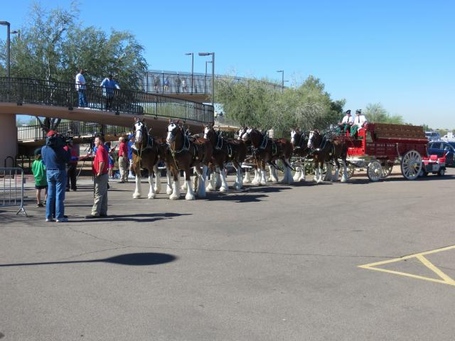 As we handed our $5 to the jolly parking lot attendant, he said "You're in for a treat. The Budweiser Clydesdales are here today!" They were out in the parking lot before the game and were drawing a crowd before the gates opened at 11. 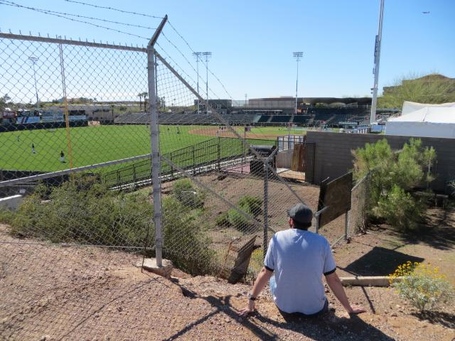 Disappointingly, the "best" free view you could get was on a hill, overlooking the stadium. The MLB squad practiced inside the stadium and they don't have a fancy complex like some of the others we've seen. The cheapest seat available for the game was $15 so we declined to pay that just to watch practice. If you're curious, here's the box score for the game.