Royals starter Jason Vargas continued what the beat writers call an "impressive spring" on Tuesday. At least the beat writers in the employ of the club. Against the Dodgers, he completed four innings, walking one and striking out a pair. He gave up four hits and allowed his first run of the spring.

Vargas threw 62 pitches in his outing. Somehow, the PITCHf/x data recorded at Brooks Baseball had 51 of those. I suppose it's spring training for the computers, too. Of the pitches logged by PITCHf/x, 27 were fastballs. Breaking it down even further, PITCHf/x had 25 four-seam heaters and two two-seamers. His fastball averaged 87 mph against the Dodgers. That's right in line with what his career average. I'll go out on a limb and say a soft-tossing left-hander needs a little less gas in the spring training tank to get his fill. His fastball looks ready. It's probably always been ready.

Perhaps. According to the data, his fastball didn't feature so much lateral movement. His horizontal movement was 5.2 inches, compared to last season's total of 6.4 inches. Of the 25 four-seamers Vargas delivered, hitters swung at 10. They didn't miss. That may seem kind of extreme, but again, for Vargas it's not that notable. Last summer, hitters swung and missed on just over three percent of his fastballs. Again, that's what happens when you're pushing a ball up there at 87 mph.

(Just throwing this out there: Jeremy Guthrie has a five percent whiff rate on all pitches. By far the lowest rate in the majors last year.)

The change is Vargas's bread and butter pitch, especially to right-handed batters. Last year, he threw the change 34 percent of the time to righties. He generally has about seven mph of separation between his fastball and his change, and that seems to be enough for him. On Tuesday, his average change was a tick north of 81 mph, which is faster than it's usually delivered. Still, he managed a swing and a miss on five of the 15 change-ups recorded. 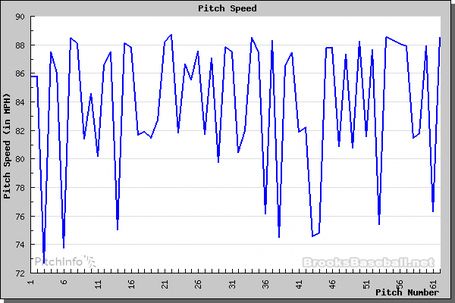 Steady. As you would expect. Even for this point in the spring.

It doesn't take much, but it looks like Vargas is ready for action.