In case you missed the first two parts, it's probably best to start there before reading the final part

Sunday was our final game. We went to Mesa to see the Royals visit the Cubs and wrap up our Spring Training adventure. 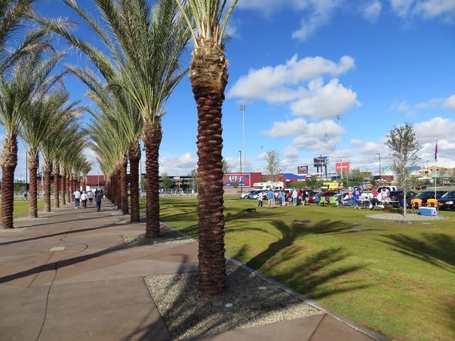 Yes, this is the palm tree lined entrance into the new Cubs Park. After the rain Saturday, we're back to winter paradise in Arizona. Cubs Park opened in February and is the largest and newest stadium in the Cactus League. 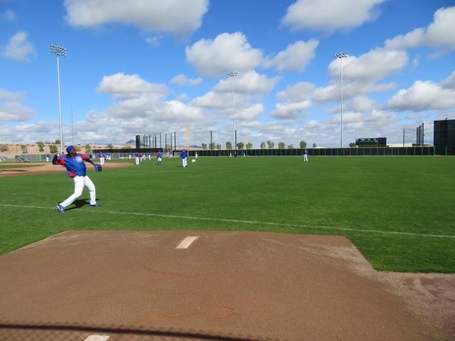 The rain gone, how could anyone not think "Let's play two!" As we missed the day before, we really wanted to get to practice today. But this led to a mystery: Where does the away team practice? We assumed both teams practiced at the home team's facility but that didn't turn out to be the case. Now my best guess is that the Royals practice at Surprise and then take the hour long bus ride to Mesa. I'd love to see it in the comments from anyone who knows the actual story, though.

If you thought the Royals lineup didn't have any power, let me introduce you to the Chicago Cubs. The main practice field is a little odd because just past right field is a parking lot. But there is about a half foot of space and then giant nets behind the fence. This way no cars are hit and any home runs would drop into the few inch space between the netting and the fence to be scooped up by fans. We camped out in right field for a good half hour and we were the only trio there. However, the only home run the entire time hit one of the posts holding up the nets and went back onto the field. In a half hour of batting practice!?! One measly home run to right? A couple of days ago at Surprise, there were maybe 20 or 30 fans spread out from left to right at the start and almost all who gave even a modest bit of effort got a baseball unless they had really bad luck. 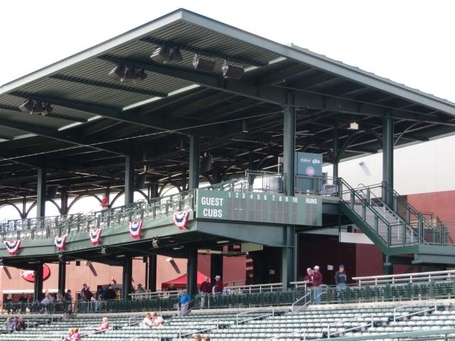 I have to hand it to them. They really tried to replicate a lot of the elements of Wrigley Field. They have the green seats, bunting, nice little green scoreboards, and replicated dimensions including the odd little nooks in left and right center. They were only missing the iconic center field scoreboard, the ivy that probably can't grow in the desert, and a bunch of angry rooftop business owners across the street. 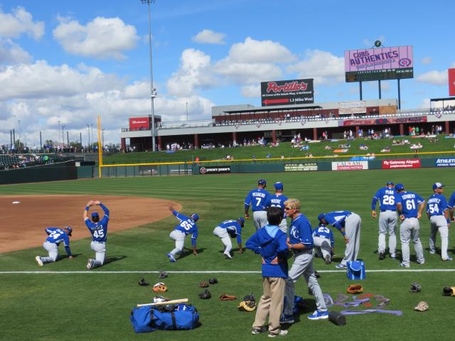 Tickets were a little pricey and less available that for the other two games. We sat a little into the outfield but were in the 4th row so we got a close view of the Royals warming up. 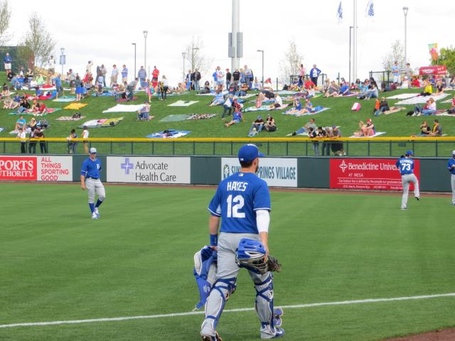 Behind Brett Hayes and his tools of ignorance, you can see the crowd building in the grass. My biggest Spring Training regret was not being able to get grass seats for one of the days we were there. I wouldn't want to do it all the time and I'd want to bring a lot of sunscreen, but just once, on a day with perfect weather, I think it would be a wonderful experience.

By the time the game had started, the outfield was packed. The crowd set a Cactus League record with 14680 in attendance. It's probably already broken by another Cubs game in the last week, but at the time we were a part of history. 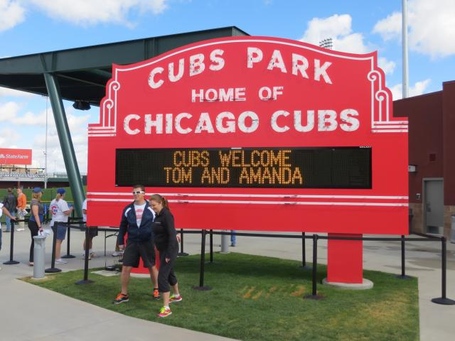 I was in awe of the Cubs marketing. Where Surprise was a nice, laid back practice experience and Peoria felt like a minor league game, the Cubs were a professional merchandising machine. For instance, you could take your picture in front of a Cubs Park replica of the Wrigley Field sign. They also had some "food truck festival" where it looked like 4 or 5 food trucks paid to be inside the stadium to sell food. Everything just had an additional layer of gloss on top of it that made it feel both professional but also maybe a little contrived. 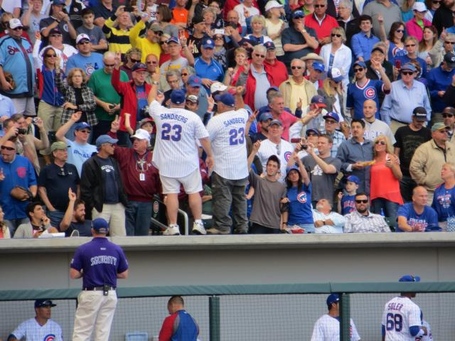 They even had the guest 7th inning stretch conductors. I think the Cubs, Wrigley Field, and Cubs fans are some of baseball's greatest traditions and icons. They will eventually win a World Series with the money they will generate and the ownership group they have. I just hope they don't end up like the Red Sox and their fans. 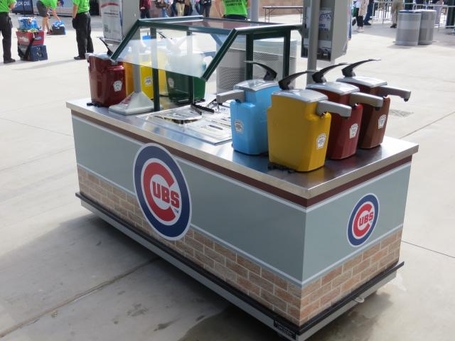 That's a downright Midwestern condiment cart with mustard, ketchup, relish, ranch, honey mustard, and bbq sauce dispensers. Disappointingly, there was no Chicago pizza to be had in the park. Giordano's was handing out free slices before the game OUTSIDE THE STADIUM. WHERE. IT'S. NOT. HELPFUL (not bitter)! So I had to settle for perfectly cromulent ballpark personal pizza. 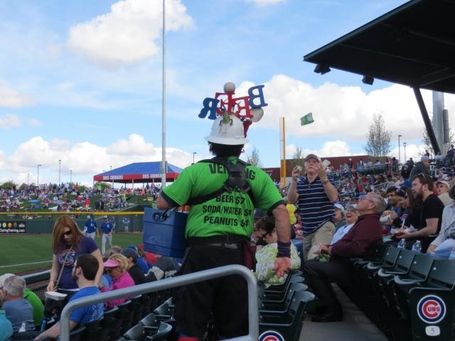 In this action shot of the beer guy, it's difficult to make out the lizard on the back of his hard hat. Every stadium needs some colorful vendors like him. 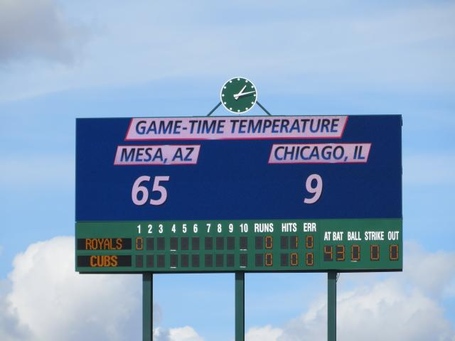 They seemed to leave this up for a long time. It was all but begging you to "take a picture and send it back to the folks at home". I wonder if the scoreboard is powered by some combination of sun, malice, and envy. 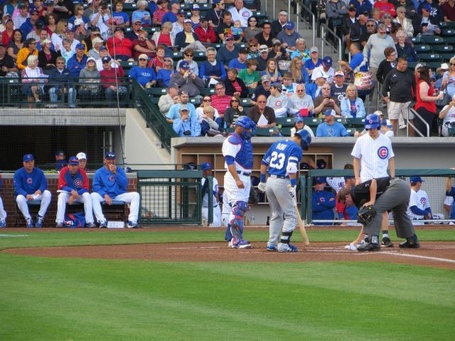 Moose was the offensive star of the day with a pair of home runs. However, the only picture I got of him was blurry and you got a picture of him in Part I. Instead, here's a picture of our new leadoff batter getting ready for the first pitch. I think I'm going to really like Aoki and be disappointed he's only here for one season. 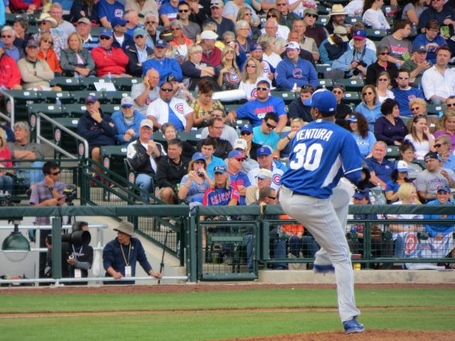 Cool Stuff pitched a pair of scoreless innings with 3Ks, Lamb gave up a run, and Rauch didn't look like he had much left, giving up 2 to a pretty bad lineup. However, we did get to see Ventura pitch. Sitting down the line, I didn't get a sense of how nasty his stuff was and they didn't have a radar gun. In fact, Surprise was the only stadium we went to that had pitch speed on the scoreboard. Yordano pitched 2 innings with one hit and one strikeout. 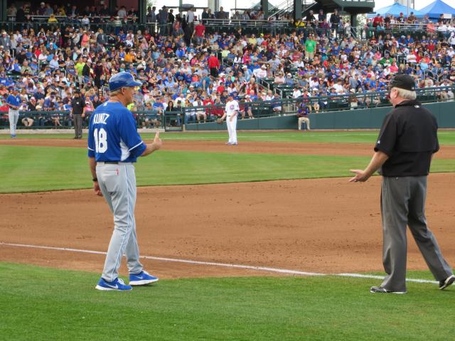 As an aside, is there anyone who loves their job more than Rusty Kuntz (unfortunately, at one point, we did have to endure some quite-sober and even-less-intelligent frat guys start poking fun of his name)?

I swear: he was giddy as can be every time we saw him. I think he just loves teaching baseball. If someone walked up to me and said "congratulations, we're going to pay you to teach major leaguers how to play baseball", I hope I'd appreciate it as he does. 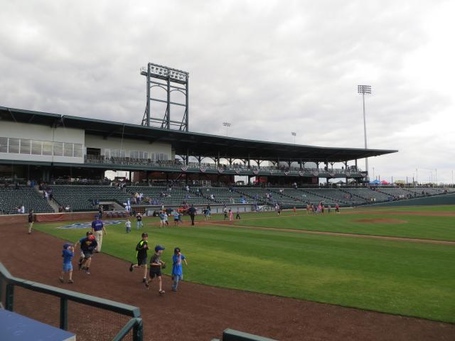 After the game, the kids could run the bases. Unfortunately, the adults could not and we were left standing behind the dugout, looking wistfully at the field. 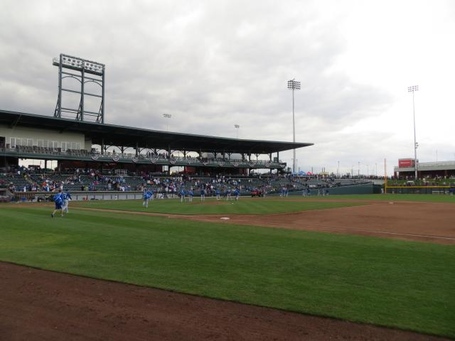 And with that, we wrapped up our visit to Spring Training. I regret that it took us this long to get out here as it's a wonderful experience that I recommend for any baseball fan. Visit your favorite team but also check out some of the others. It's like a month long festival in late winter to soak in sun and baseball. What's not to like?