Danny Duffy is exiled to Omaha where he will pitch out of the rotation.

Share All sharing options for: Royals option Duffy to Triple-A

The Danny Duffy To The Bullpen Experiment is over. For now.

Turns out sometimes a player - with a disastrous string of performances - can actually help a team do the right thing. In Duffy's case, the right thing is to go down to Omaha and be a starting pitcher. The club optioned Duffy along with Donnie Joseph to Triple-A on Sunday.

Duffy lost the competition for the fifth starter role to Yordano Ventura and attempted to remain in Kansas City by offering (or pleading) to pitch out of the bullpen. The Royals initially acquiesced, but there was apparently a split in the organization about Duffy's role and where he would best be served filling that role. The camp who wanted him in a rotation won.

On Saturday, Duffy came in from the bullpen and got the first two outs. He then walked the next two hitters before serving up a belt-high fastball to Michael Choice. And gone. We've seen this outing before.

Whether he's in the rotation or coming out of the bullpen, it's the same old story for Duffy. The devil is in the location. On Saturday, look where catcher Ramon Hernandez set up: 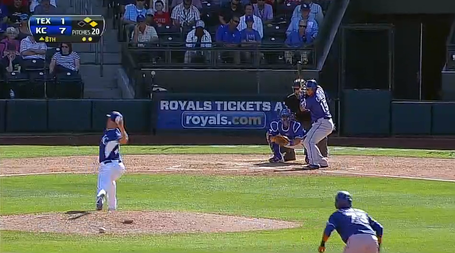 Down and in. And check out where Duffy delivered: 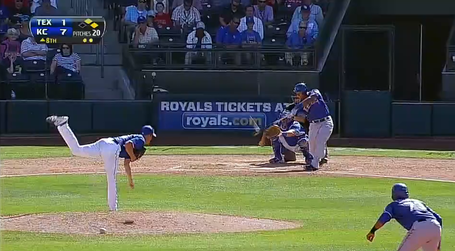 Duffy serves it up and away which becomes a three run, opposite field bomb.

There's a lot of armchair psychosis going on with Duffy. He gets annoyed when he can't put a hitter away 0-2 and loses his focus. He gets too amped up in key situations and overthrows. He needs to learn to stay within himself. There may be something in his mental makeup that is holding him back. I contend it's the Royals problem to try to unlock in order to help Duffy succeed. Thankfully, they are going to keep him in a rotation.

We've seen his stuff. It's killer. And we've seen his command. It's... not so good. Personally, I think the Royals should place him on a strict pitch count in Omaha. Let's say 90 pitches. That is his number every single game. It's up to him to develop an economy of those pitches to see how long he can last in a start. Some will contend that would be an added layer of pressure. They will say he has a hard enough time dealing with the stress of the game that having a solid pitch count hanging over his head would be a distraction. I say if he's bothered by things such as pitch counts, maybe he's better suited for another role. Like groundskeeping.

Yost contends the Royals aren't going back on earlier statements about Duffy needing to stay in the big leagues so he can "learn to get big league hitters out." That's fine. We can parse Yost's statements however we like. It's not a huge deal. What's important is the Royals are getting this right. Because as Yost said, had Duffy succeeded in the bullpen, they would need to send him down to Omaha anyway to get stretched back out as a starter. Again, that just underscored my assertion that Duffy - as long as there's the tiniest sliver of hope he can contribute in the rotation - needs to be a starter.

Kudos to the Royals for doing the right thing.