Is it just me, or are the winters getting more brutal each year? I figured it had something to do with age or whatever, but I don't know. The days are just darker without baseball. (Yeah, they're also just generally darker in the winter, but I'm trying to get on a roll here.) So every spring, when baseball returns, it just seems to inject a shot of adrenaline into life. And for that, I'm very happy.

You've seen our predictions. Stop by and weigh in by putting yours down in the comments. That way when the Royals win 99 games and the Central, you have it linked that on March 31, hours before the first pitch you actually called that one.

Opening Day. I can't say that enough. Connor will drop the game thread by 11. Be ready. Be Royal.

Ahead of the first pitch of 2014, I'm including some projected standings. Just for fun. But if you think these totals are low, maybe you should bookmark this post.

Here are the projected PECOTA standings: 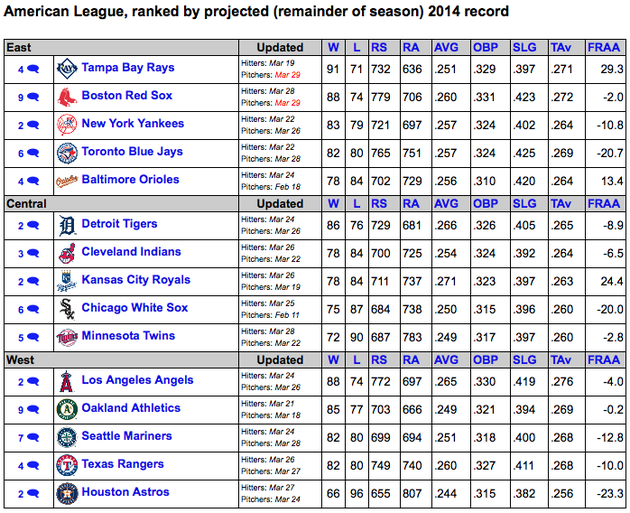 And from FanGraphs, here's the ZIPS take: 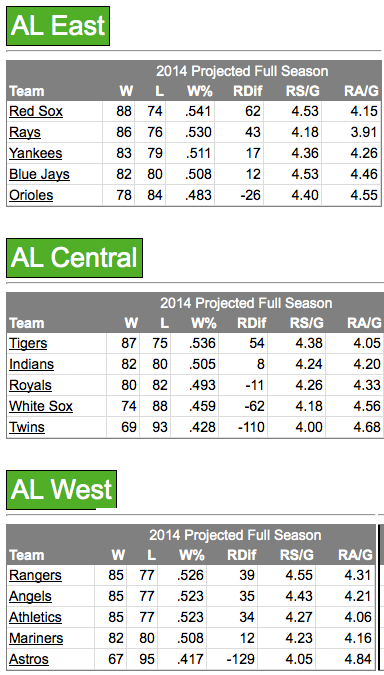 A few other links as you kill time waiting for Norichika Aoki to step to the plate:

Kings of Kauffman: Accepting Billy Butler for What He Is
David Hill writes a post about Butler and doesn't mention ground balls, double plays or clogging the bases. Color me confused.

Pine Tar Press: Tigers Falling Back to the Pack
Clint Scholes sees a silver lining to the Tigers off season.

Royals Blue: Spring Training Review: And the Award Goes to....
A look back at the just completed Cactus League campaign my Zachary Hodson.

Judging the Royals: The Royals and the fastball count

Mellinger: Royals’ 2014 season will be referendum on Moore