The Royals have basically decided they are not going to give Johnny Giavotella a chance to play second base everyday after sending out the like of Chris Getz and Elliot Johnson last season. I propose the Royals trade Johnny to the Dodgers for late blooming outfielder Scott Van Slyke.

The Dodger have a plethora of outfielders right now (Crawford, Kemp, Puig, Ethier) with the system's #1 rated prospect, Joc Pederson in AA. The Royals could even add Paredes or Peguero with Giavotella to give the Dodgers a little AAAA outfield depth.

Here is his 2014 Steamer projection along with the ones for the Royals outfielders:

He would slot in as the team's 3rd best offensive outfielder just ahead of Maxwell.

On the defensive side, he seems like an average defensive corner outfielder from this report from Scott Andes at Lasorda's Lair:

Van Slyke's defense isn't much, if anything at all. That doesn't say much for a guy who doesn't see a whole lot of time in the field either. However Van Slyke may not have been as bad as everyone thought with the glove in 2013. The 27-year-old right handed hitter split time between right field, left field, and first base

Probably most importantly, check out this stache: 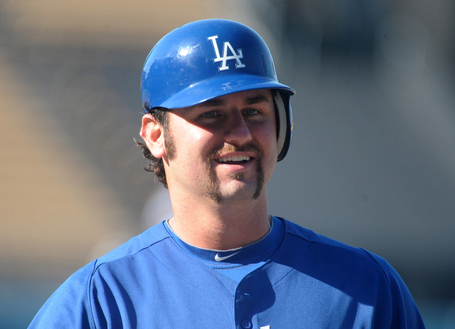 I know that the Royals don't need an outfielder right now, but they obviously don't want need Giavotella. Van Slyke is a nice insurance for 2013 (once Cain hits the DL). Van Slyke is projected to easily be a better every day hitter then Dyson. With Van Slyke in the outfield, Dyson can be correctly leveraged by coming off the bench to pinch run. Also, he is a right-handed bat on a team dominated by left-handed outfielders (Maxwell is the only right-hander). Finally, Van Slyke can play right field next season when Aoki is a free agent.

As for Giavotella, he goes to a team in need of 2B help. Cuban import Alexander Guerrero is not making the cut and the team is thinking of using Dee Gordon at 2B. Dee Gordon hits like Jarrod Dyson, but with less power. With Giavotella gone, the Royals can find out if their 4th overall pick from the 2010 draft can cut it in the bigs.

While the Royals and Dodgers don't need to make the trade, they may put themselves in better position for the future by making the trade. Neither player seems wanted by their organization and could give their new team additional depth.