I've been watching a lot of Žižek ...

Recently, a baseball writer I know made a comical mistake -- well, know in the sense that the insipid shavings of myself that have been sucked into the tubes of the internet have once or twice collided with his in the ephemeral nebulosity that drafts through the very real and byzantine pipework of the world wide web.

Anyway, he made a mistake in one of his articles last weej. If that's the sort of thing that bothers you, you might want to reevaluate the intensity at which you value propriety. For example, why would you insist on someone sitting up straight in a chair when that position is entirely unnatural for animal to assume? Some very serious gastrointestinal problems arise from the fact that it has become the norm for humans being to defecate into chairs ...

Oh yeah. The mistake. So, he accidentally listed the Royals as an "analytically-inclined team," or something to that effect. He had cited the Royals earlier in the article, and those six letters just happened to make their way into a list a few paragraphs later. Simple mistake, but it got me thinking. What would it be like to be a fan of an analytically-inclined team?

As a baseball fan, I have to respect the Athletics organization for what they've been able to do as relative plankton in the revenual hierarchy of the game. But when they win, I don't run laps around my apartment complex. The Royals are my team, liver spots and all. And that sucks sometimes -- as you know.

The Royals stance on analytics seems to be one of begrudging placation. They have a Director of Baseball Analytics. That's not a photoshop. Here's a link if you'd like to see it yourself. 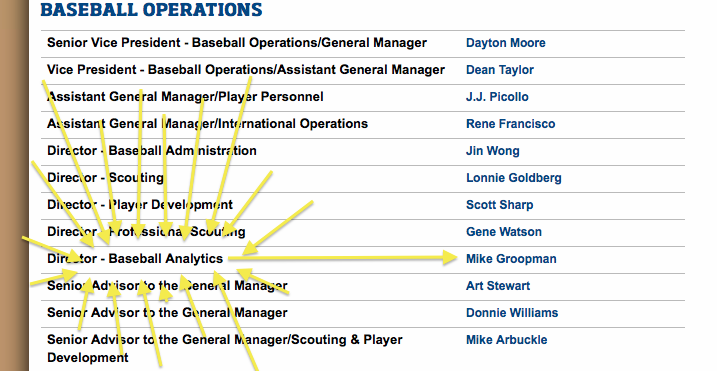 It doesn't appear to be a drastic paradigm shift. The team has not made any moves that could be clearly described as analytically-inclined. Chris Getz is gone, but he wasn't valuable in any perspective, so it's unlikely that the new department made the Getz expulsion happen on their own. Mike Groopman & Co. might be somewhat responsible for the acquisitions of Omar Infante and Norichika Aoki, but neither of those guys is your quintessential saber-star, and no self-respecting analytics department would boast about Jason Vargas being the lynchpin of their pitching staff.

So, instead of using analytics like the Athletics do, the Royals appear to be using them like Niels Bohr used a horseshoe.

A friend was visiting in the home of Nobel Prize winner Niels Bohr, the famous atom scientist.

As they were talking, the friend kept glancing at a horseshoe hanging over the door. Finally, unable to contain his curiosity any longer, he demanded:

"Niels, it can’t possibly be that you, a brilliant scientist, believe that foolish horseshoe superstition! ? !"

"Of course not," replied the scientist. "But I understand it’s lucky whether you believe in it or not."

This seems to be the way the Royals approach analytics at the moment. They have the department in place, but they don't really believe in it.